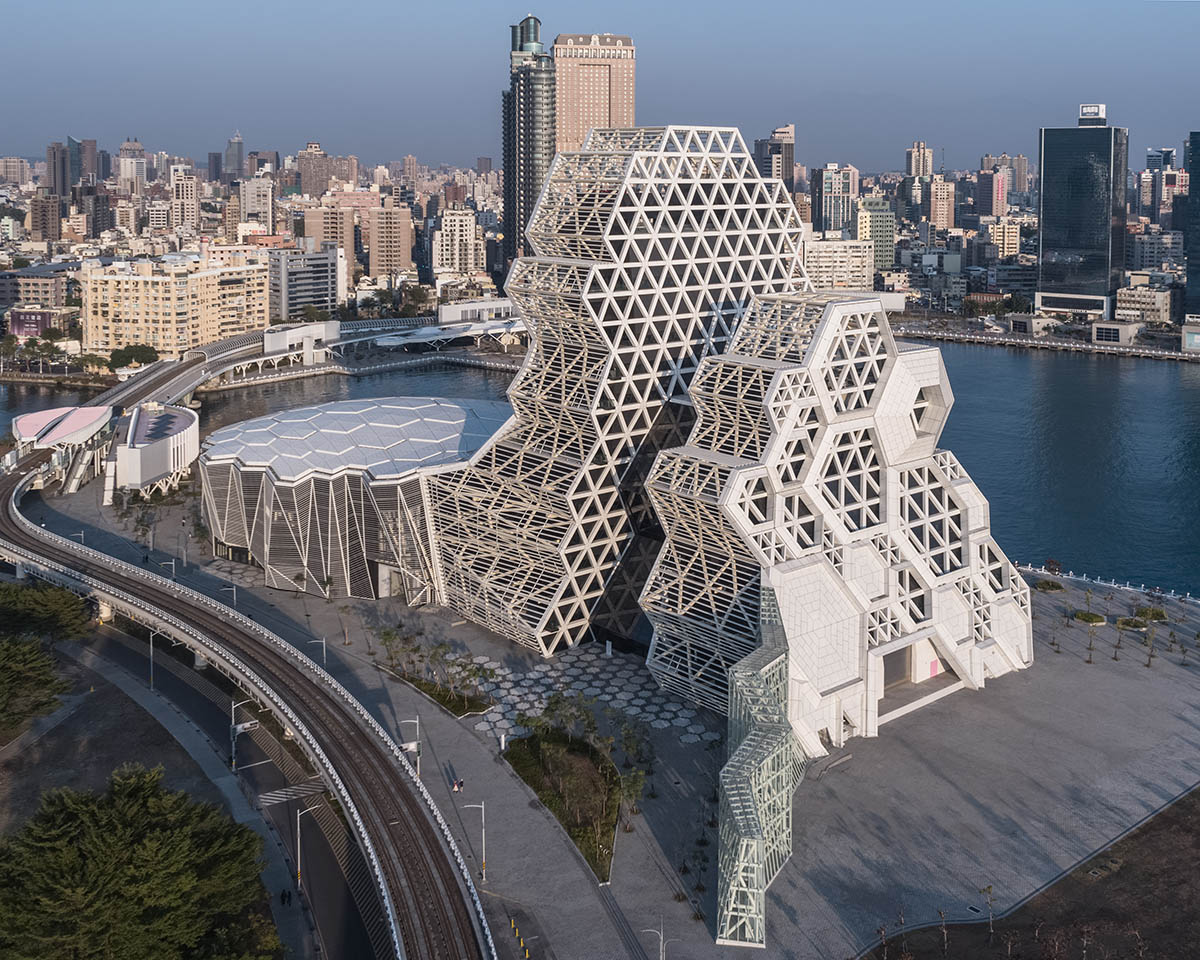 Named Kaohsiung Pop Music Center, the 88,000-square-metre building is located next to the mouth of the Love River in the port city of Kaohsiung, in southern Taiwan.

The design team won an international competition ten years ago to design this striking pop music center. In the project, the studio preferred to translate the forms of foams, corals, seaweed, waves and aquatic animals on the surfaces of the complex in which each of them specializes in specific uses.

Each piece manifests its own personality and a formal challenge and, at the same time, is integrated into a common ecosystem. 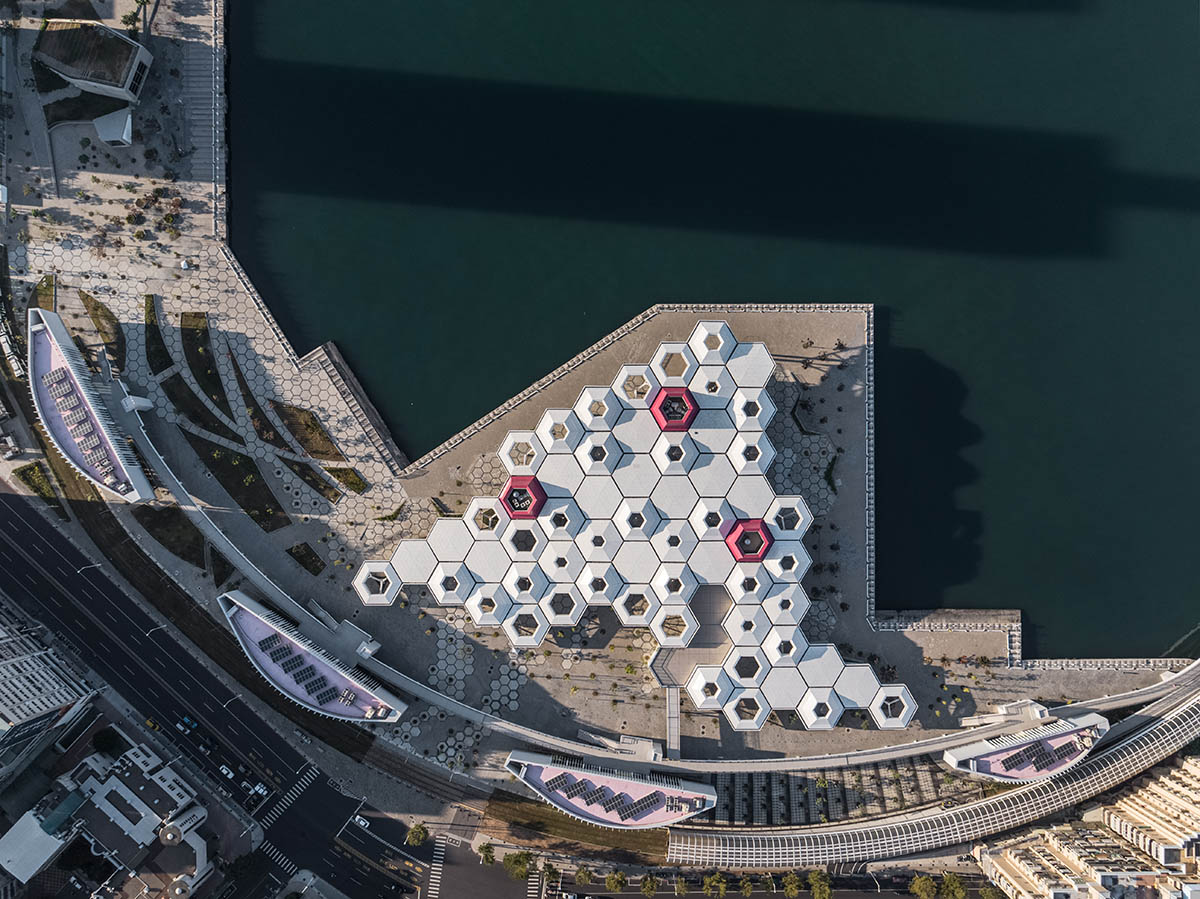 The joint effort between the City Council, the Ministry of Culture and Central Government of Taiwan to give the Kaohsiung port area a new cultural dimension has reached its peak with the center dedicated to pop music.

"The pop music industry has a strong identity in the society of this part of Asia. In Taiwan, due to its history and geopolitical situation,  has developed a unique style, where many cultural elements coexist and in which its own tradition is increasingly being claimed," said Manuel Monteserín.

In the same way, the project, filters the tradition between iconic architectures and, at the same time, proposes a flexible design in which the program can fit but also the cultural reappropriation of the users. 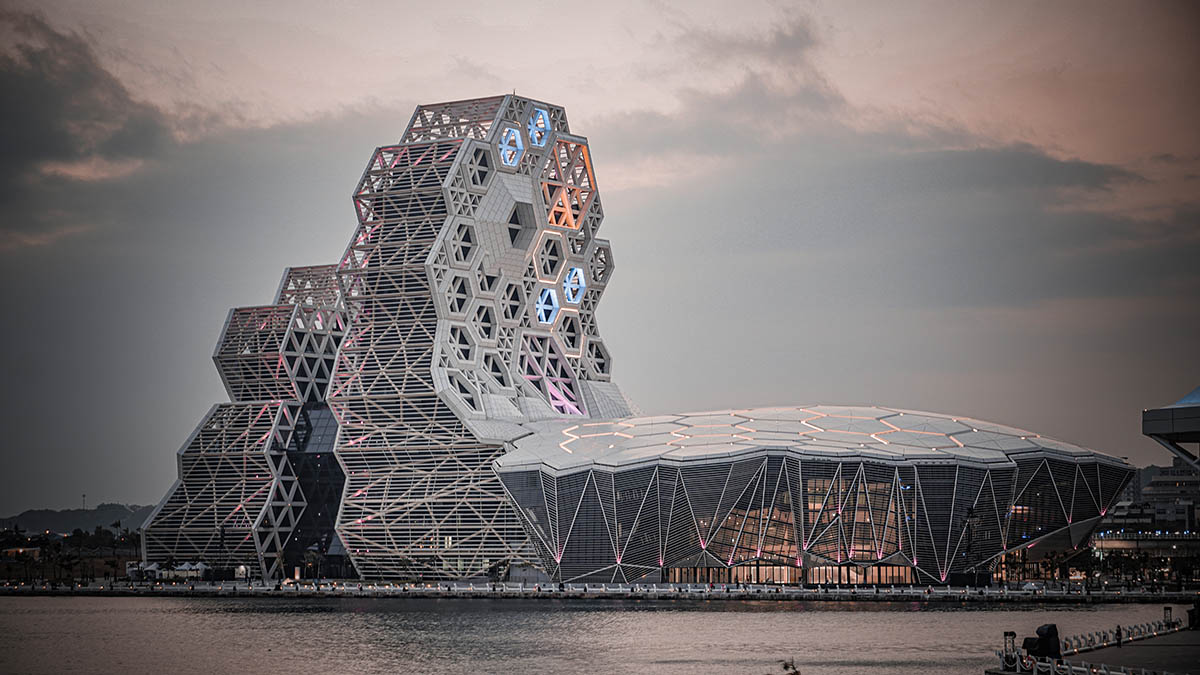 The architectural ecosystem that make up The Kaohsiung Pop Music Center consists of The Great Wave, with an outdoor auditorium for 12,000 people, a concert hall for 3,500 people and two towers with an office program, a museum and rehearsal rooms.

The second part incorporates Whales, six live houses for events, concerts or presentations, while the third part consists of Dolphins, five restaurants connected by a walkway.

The fourth part contains The Coral or Exhibit, an exhibition center and outdoor multipurpose area and a series of parks and walks which connect the entire intervention.

The entire complex is designed to respond to the program, but also to allow spontaneous activities to take place when there are no concerts. In this way, the architectural pieces accommodate the interior rooms and, at the same time, tturn onto the exterior generating different meeting spaces.

The GREAT WAVE. Two auditoriums and two towers in Kaohsiung

The GREAT WAVE consists of two large auditoriums  -one open-air with a capacity of 12,000 people and the other covered for 3,500 people - and two towers which top each of the auditoriums respectively.

The outdoor auditorium is set on a green mantle. The spectators are distributed throughout the green area, which becomes, with small topographical gestures, the most flexible space adapted to the different shows and groups of people. The smaller tower houses the stage and closes the intervention.

The covered auditorium functions as the great plinth on which the tallest tower emerges. Its outer skin folds through the hexagonal geometry and is detached from the ground allowing access to the building. The lobby space is between the outer skin and the concert hall. The concert hall, on the other hand, opens up like a fan with five separate bleacher blocks. Between them is the connection with the lobby. The design of the hexagonal grid that forms the roof of the auditorium continues drawing the facade of the main tower. 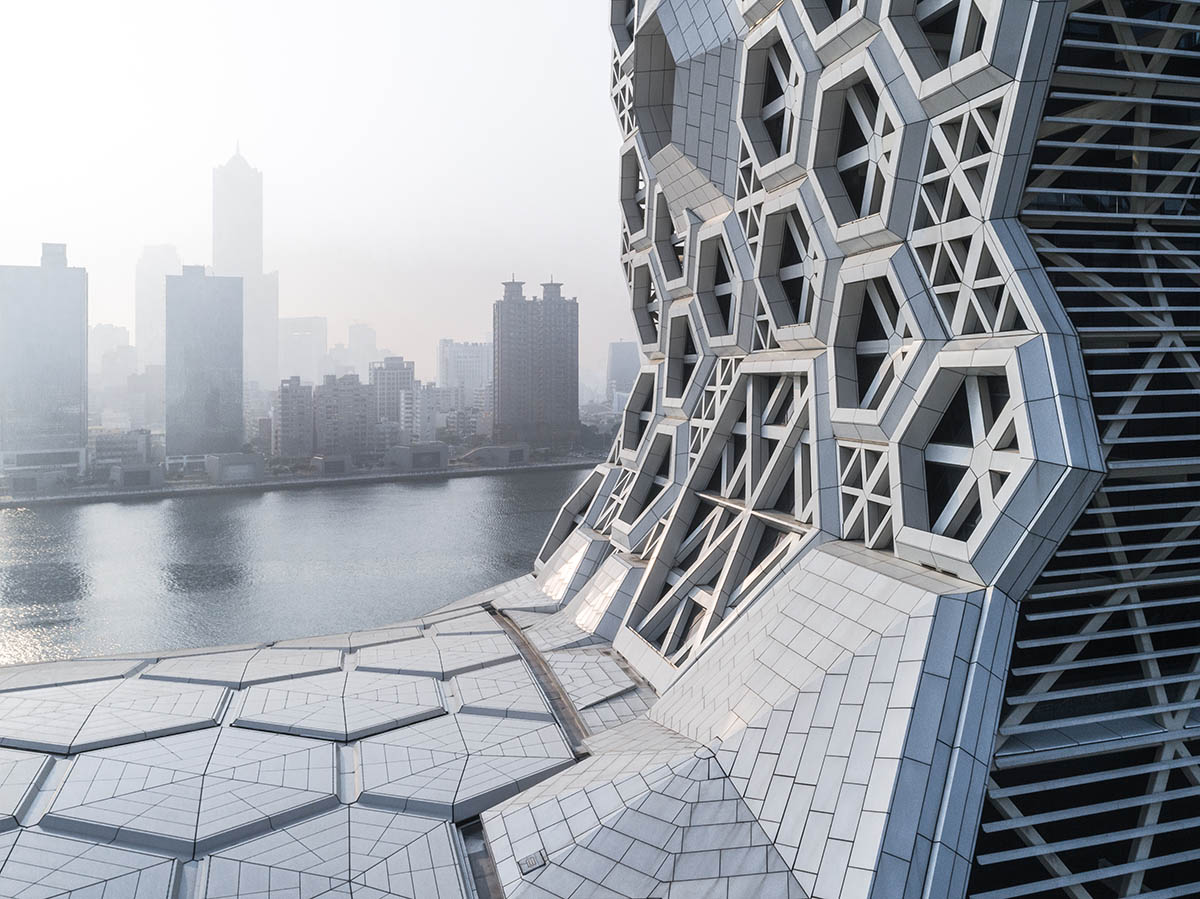 The two towers are the most iconic element of the Kaohsiung Pop Music Center. They distribute the spaces dedicated to the music industry: rehearsal rooms, offices, exhibitions, etc. Each one emerges respectively from one of the auditoriums: the highest one gives continuity to the Concert Hall while the smaller one serves as a backdrop for the open-air auditorium.

The towers were initially conceived separately, but their position had to be rethought to protect the adjoining residential areas from the acoustic impact. Finally, they were placed back to back, creating a crack between them as a large access atrium. These towers are part of the city skyline and can be easily recognized from any point, leading the visitor to the port, like a great lighthouse. 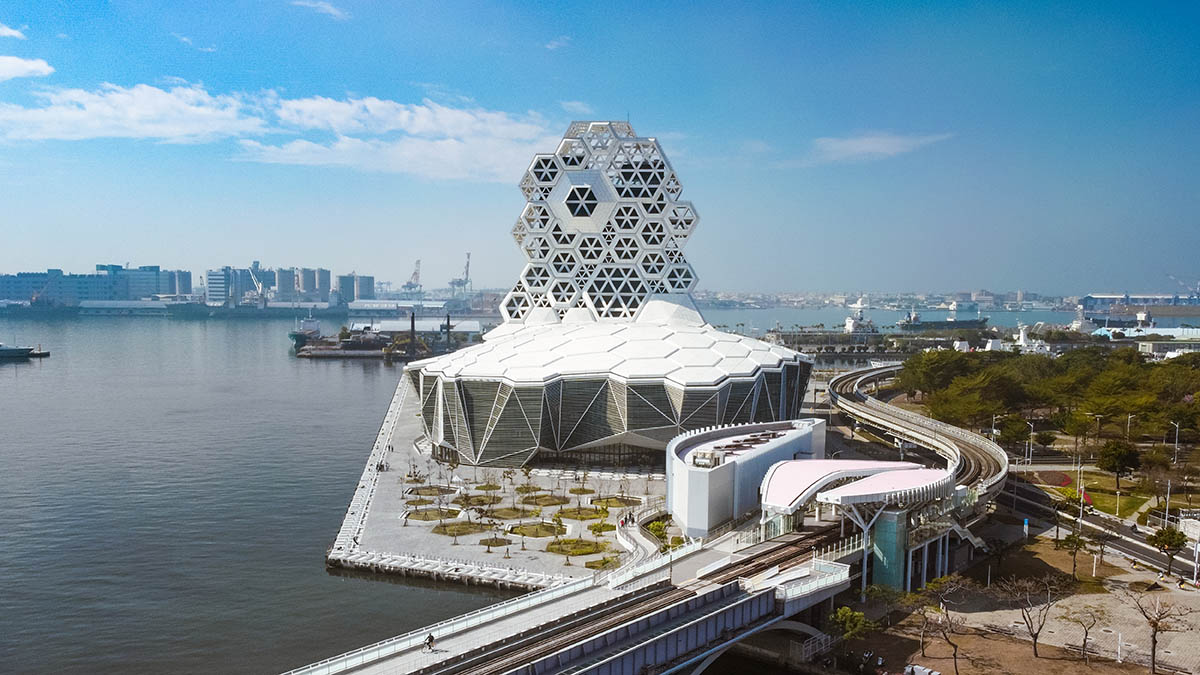 The hexagonal geometry skin, in addition to allowing continuity between the horizontal plane of the auditorium roof and the tower's façade plane, achieves a change of perception in the scale of the building. It is difficult to measure it with the naked eye in relation to the other buildings in the immediate surroundings because its measurement parameters are not determined by floors separated by three meters. It is a being from another planet peeking between the prismatic blocks of the city. 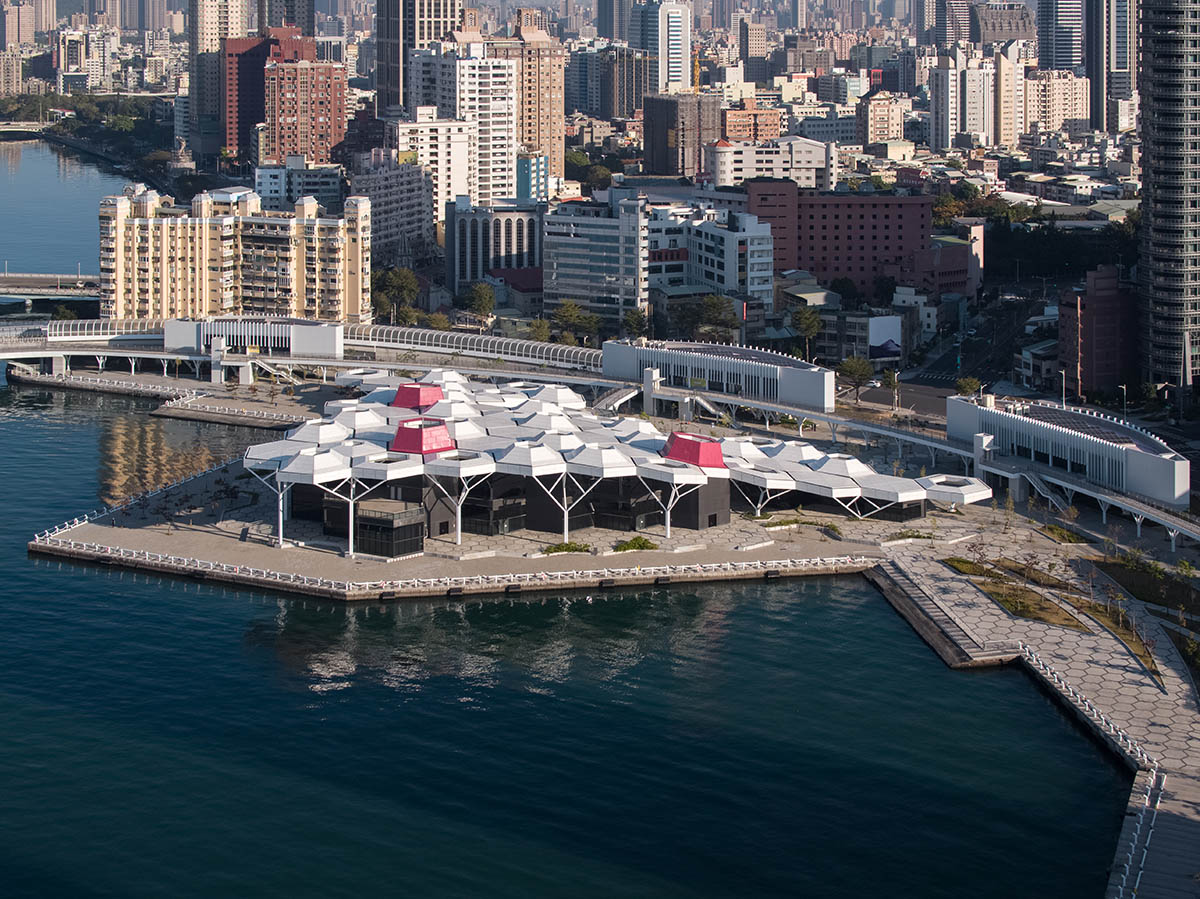 The Live Houses or "whales", are a series of spaces which overlook the sea to organize events, concerts or presentations. They were the first pieces to be completed (in 2017) of the entire complex. There are six of them, two large (XL), two medium (M) and two small (S) and they are connected by a large parking lot in the basement.

The most characteristic feature of the Live Houses are their green roofs, which are also walkable. The green backs of the whales appear on the streets leading into the bay, curving the skyline of the city and inviting passers-by to climb on their backs to watch the sunset over the port.

At the urban level, the whales are set back several meters from the edge to allow for a large pedestrian promenade by the sea. The uses are mixed and combined: while the promenade is filled with food trucks and street food stalls, on the decks of the Live Houses you can find electronic music dance sessions and inside, attend video game presentations or jazz concerts. 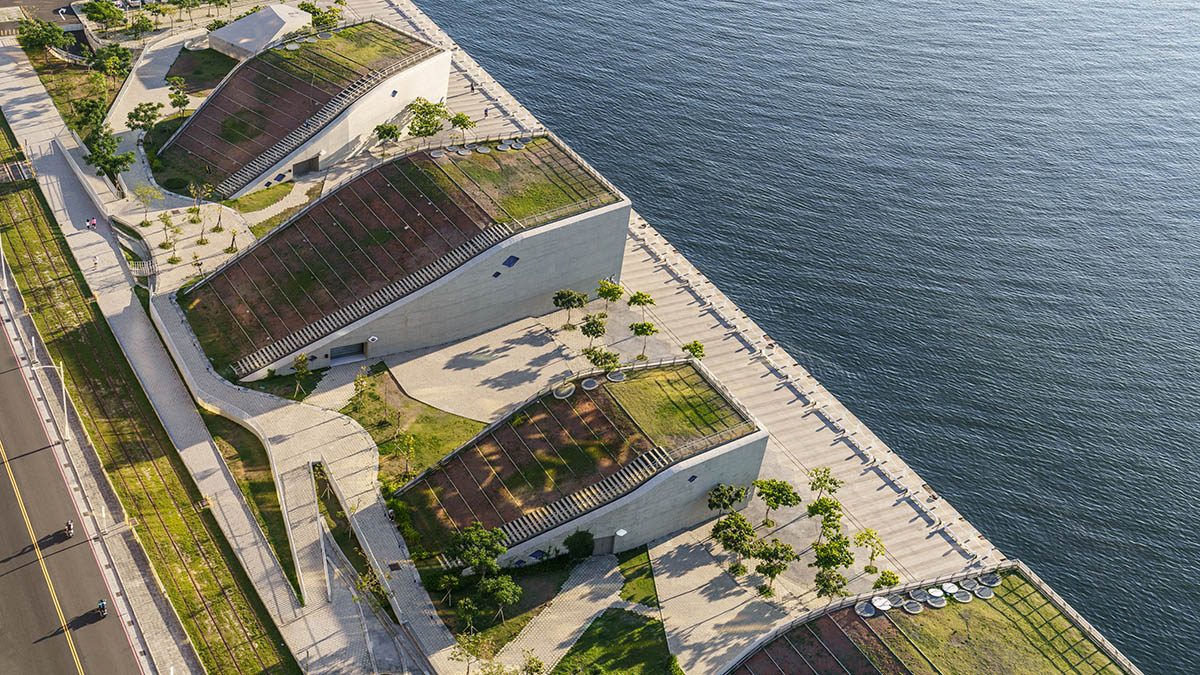 The Dolphins run parallel to the tram throughout the Kaohsiung Pop Music Center. They are a backbone that sews the two large areas divided by the Love River.

The five Dolphins, with restaurant use, are raised on pillars leaving free access to the enclosure around the perimeter. From the footbridge which connects them, you can walk along them having a different perspective of the bay and cross to the other side of the river. 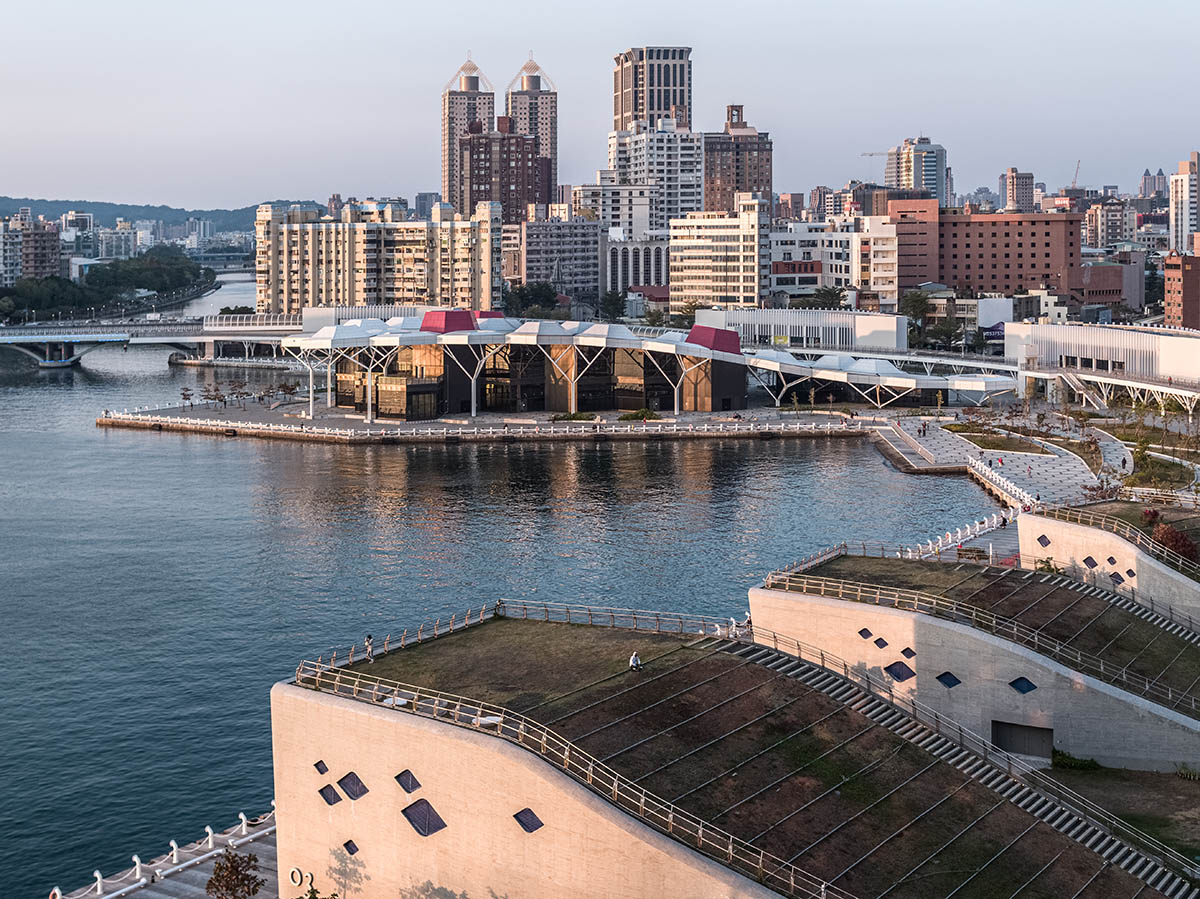 The Coral occupies the central area of the Kaohsiung Pop Music Center. It is a large roof made up of hexagonal umbrellas supported by branched pillars (taking Frei Otto's as a reference).

It is the piece that has undergone the most modifications from its initial design to its final phase. In the competition phase, The Coral was proposed as a green and walkable roof under which a night market (street food and leisure market typical in Taiwan) would be housed. This market would guarantee life and animation in the bay on days when there were no concerts or activities scheduled. After the competition was awarded, the government suggested to build a large enclosed and air-conditioned exhibition hall (heated spaces are very common in Taiwan due to the tropical climate). In the end, it was decided to keep the roof as the most effective design to combine enclosed spaces, which contain commercial and exhibition program, and shaded open spaces where, spontaneously, a great diversity of activities take place (street markets, street dances, theaters, etc.).

The branched pillars which allow very few supports and large spans and the hexagonal module flexibility have been key to generate a very versatile and adaptable design to the modifications of the program and the surface that have been occurring throughout the process. This adaptability will also be key to accommodate different programs in the future. 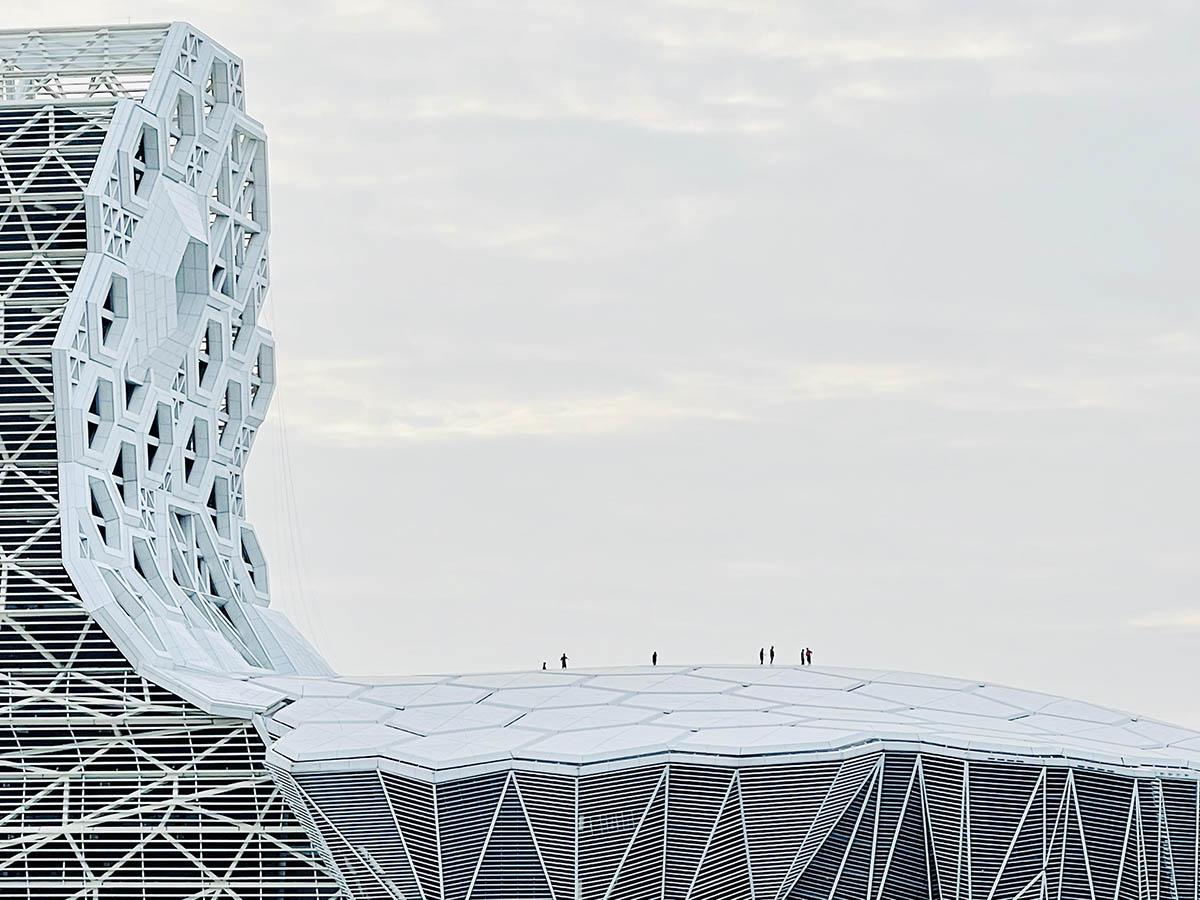 The Parks and Walks

The project culminates in a comprehensive urban design with promenades and a large park at the mouth of the Love River. Taiwan's humid tropical climate ensures that in a few years the area will be populated with lush vegetation and could become one of the most important lungs of an industrial city so affected by pollution. 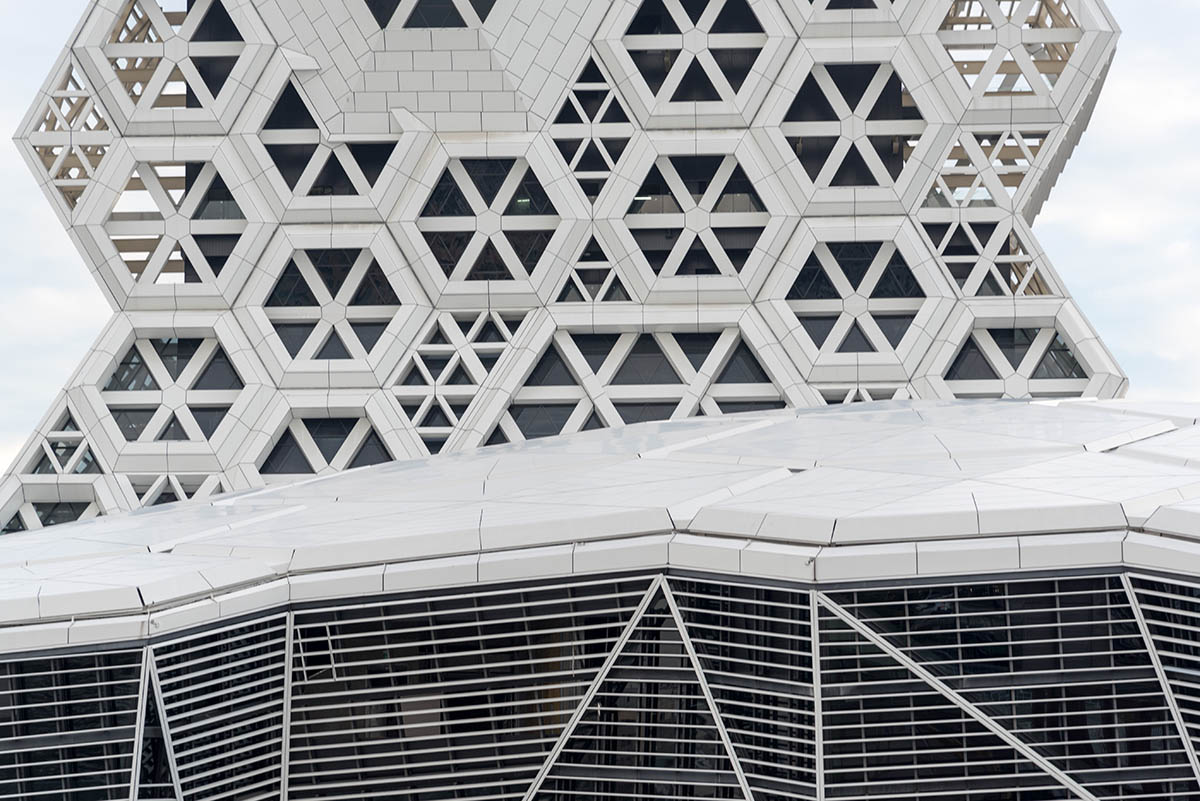 The History Of The Project

In these ten years, since the competition was won until the construction of the entire Pop Music Center complex has been completed, many things have happened, it has been quite an adventure with very complicated moments and other very satisfying ones. Yorokobu published this article (https://www.yorokobu.es/ciudad-del-pop-taiwan/) which tells that other story that is also part of the project, as much as its design and execution. 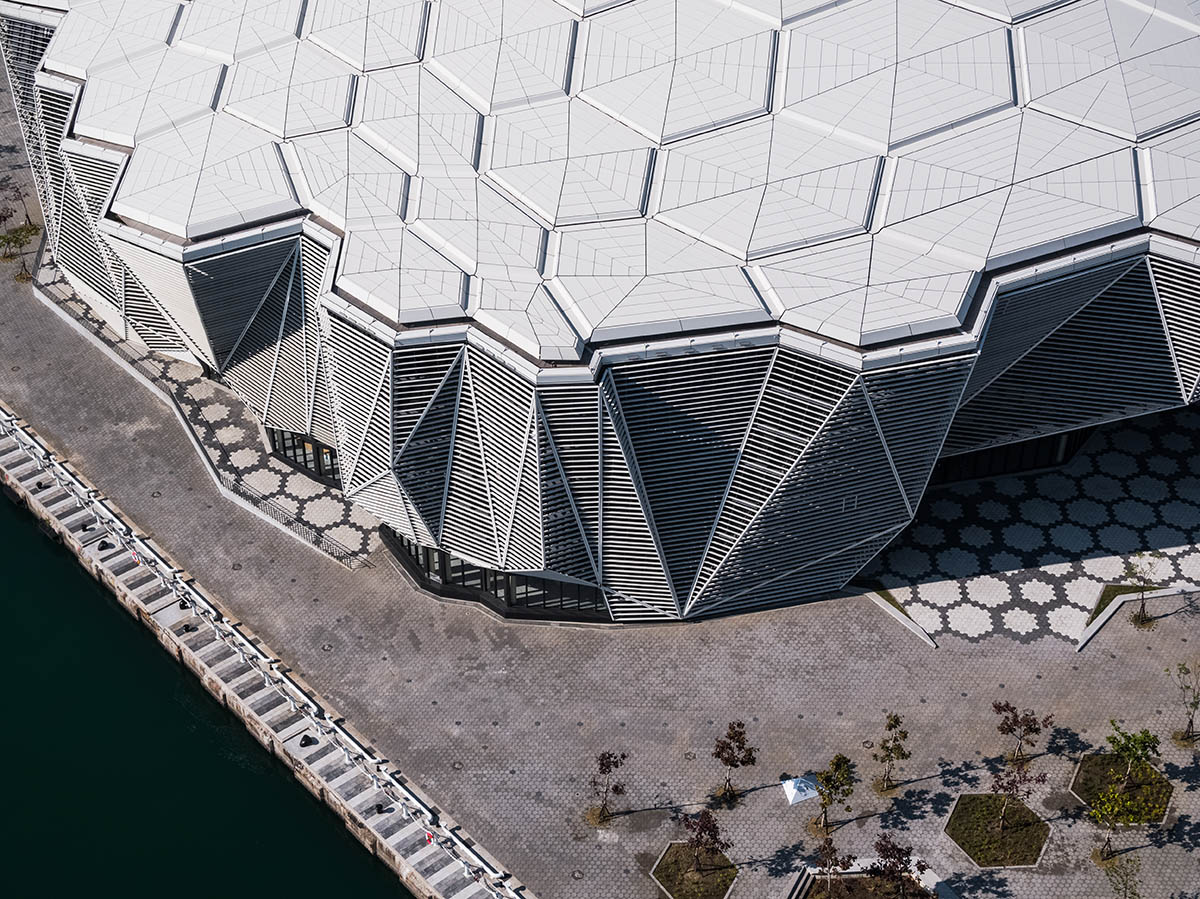 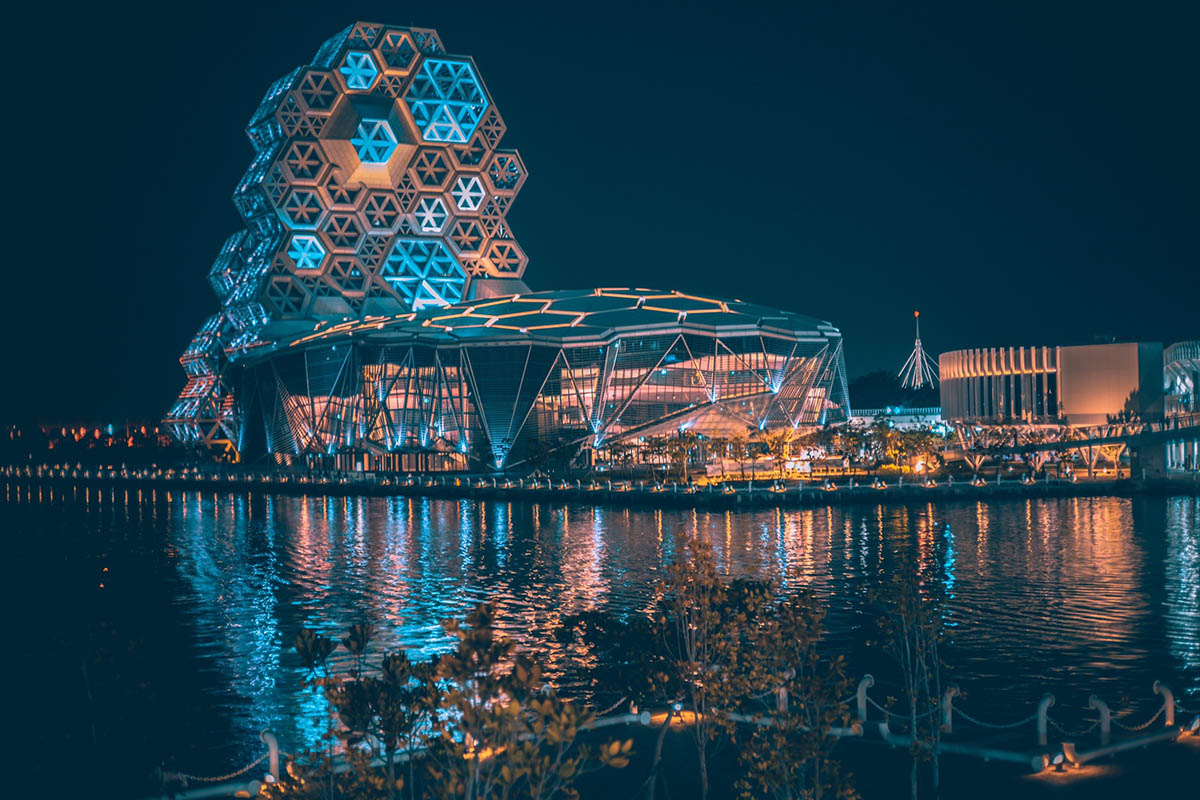 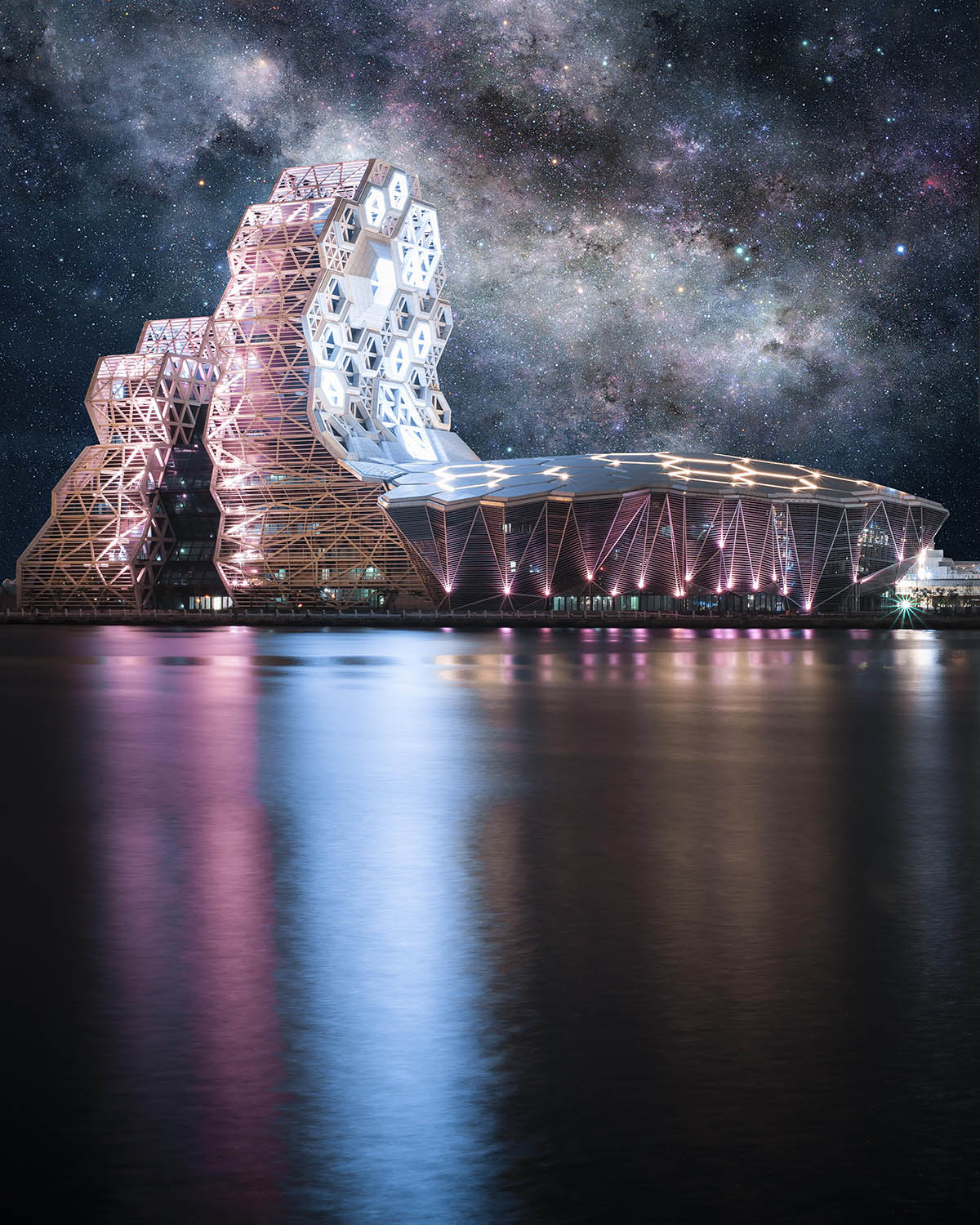 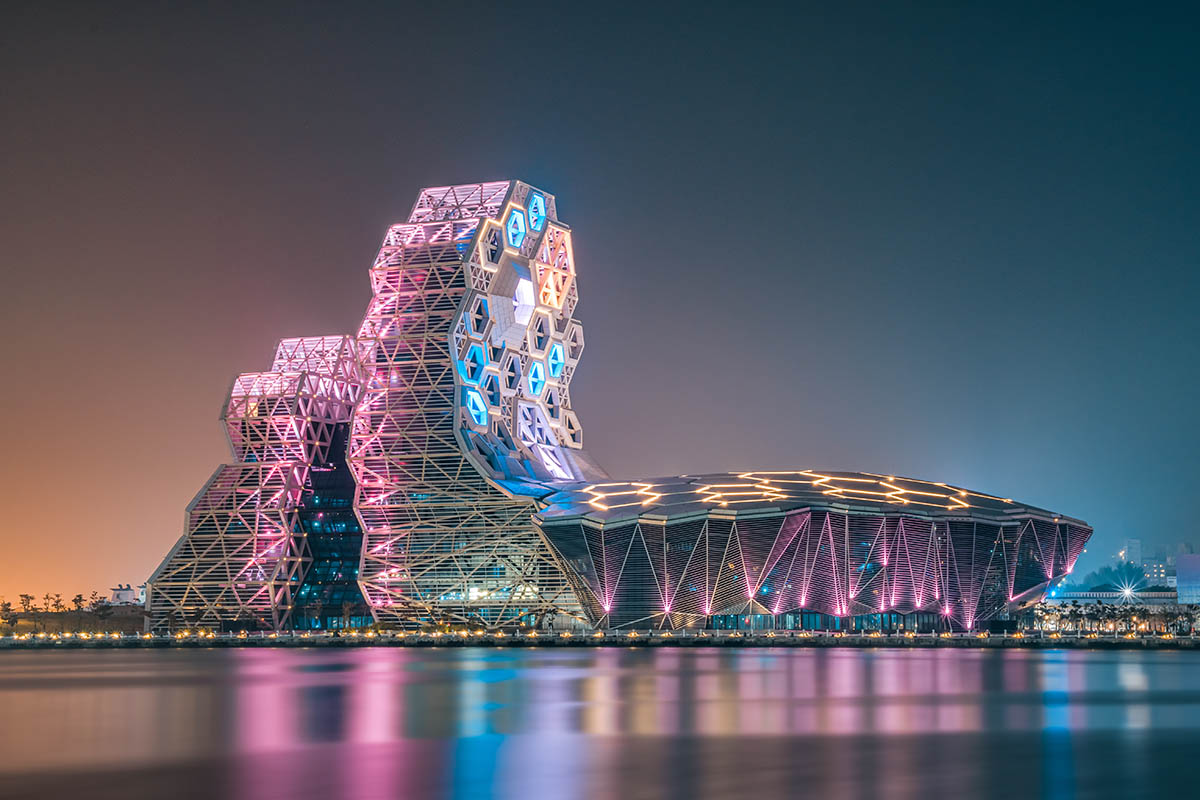 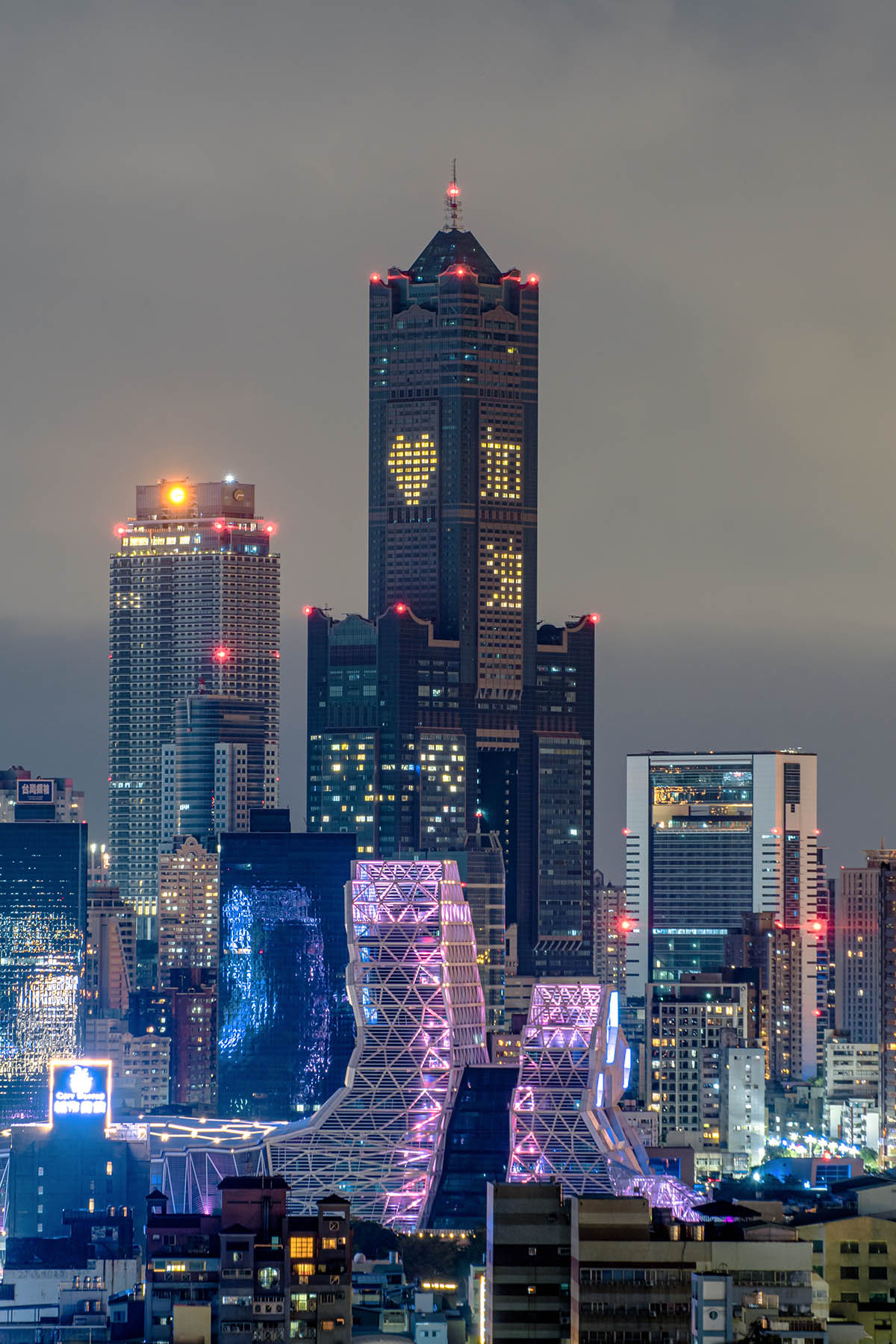 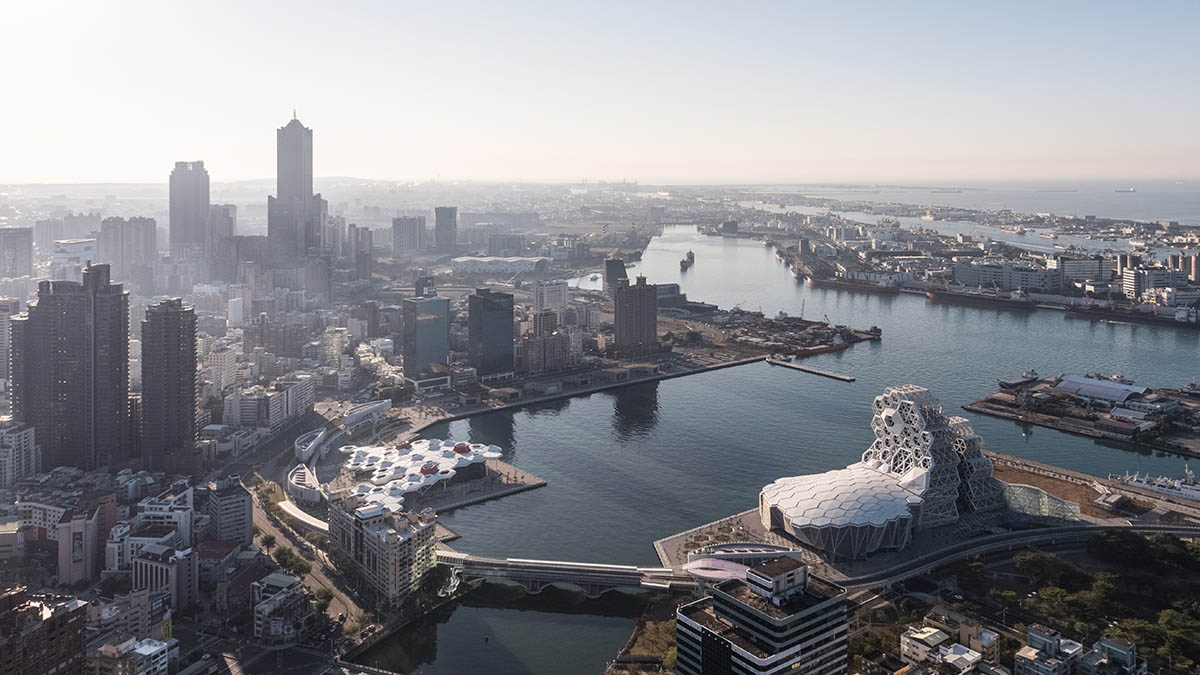 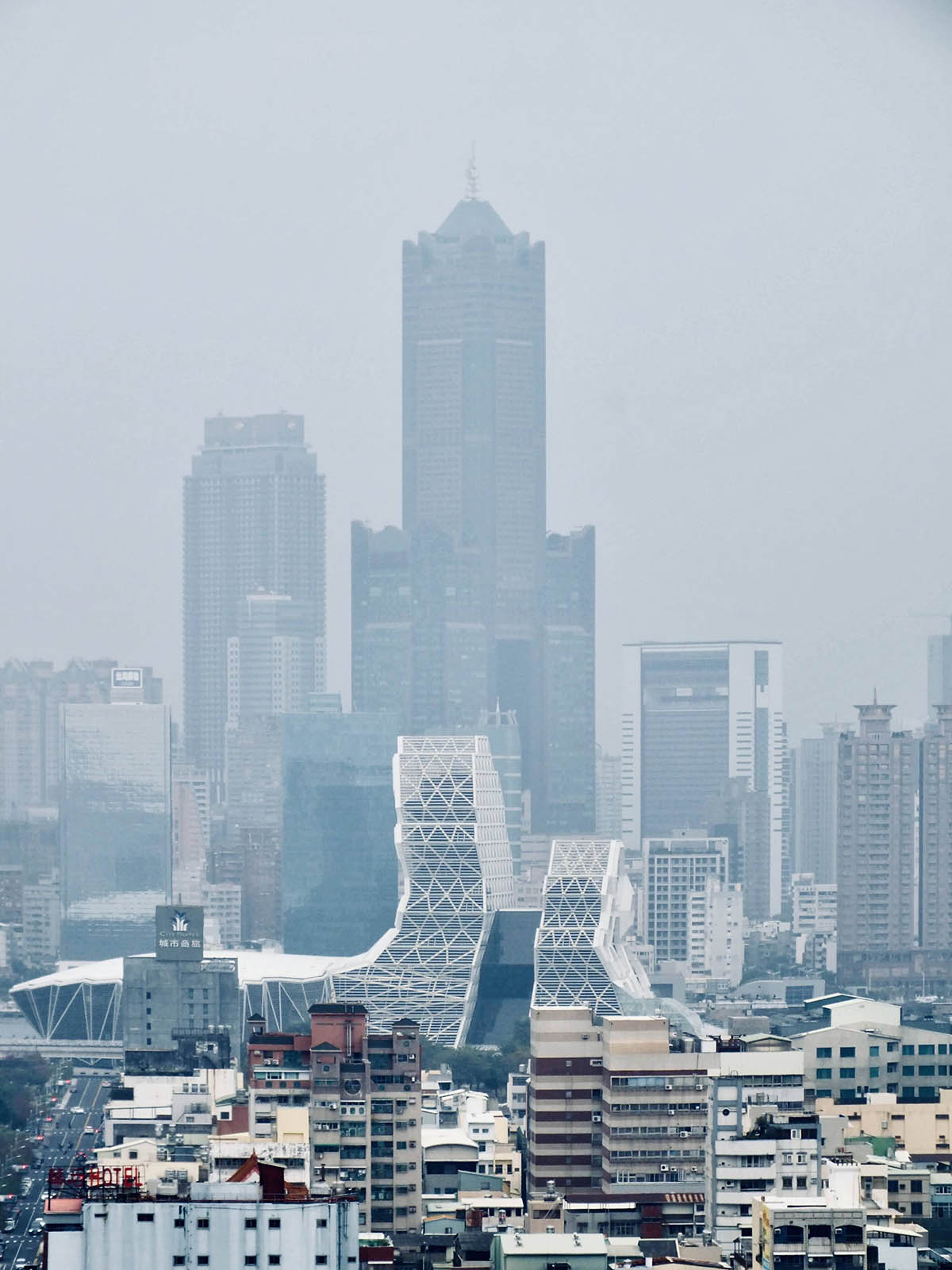 Awards: First prize in the competition