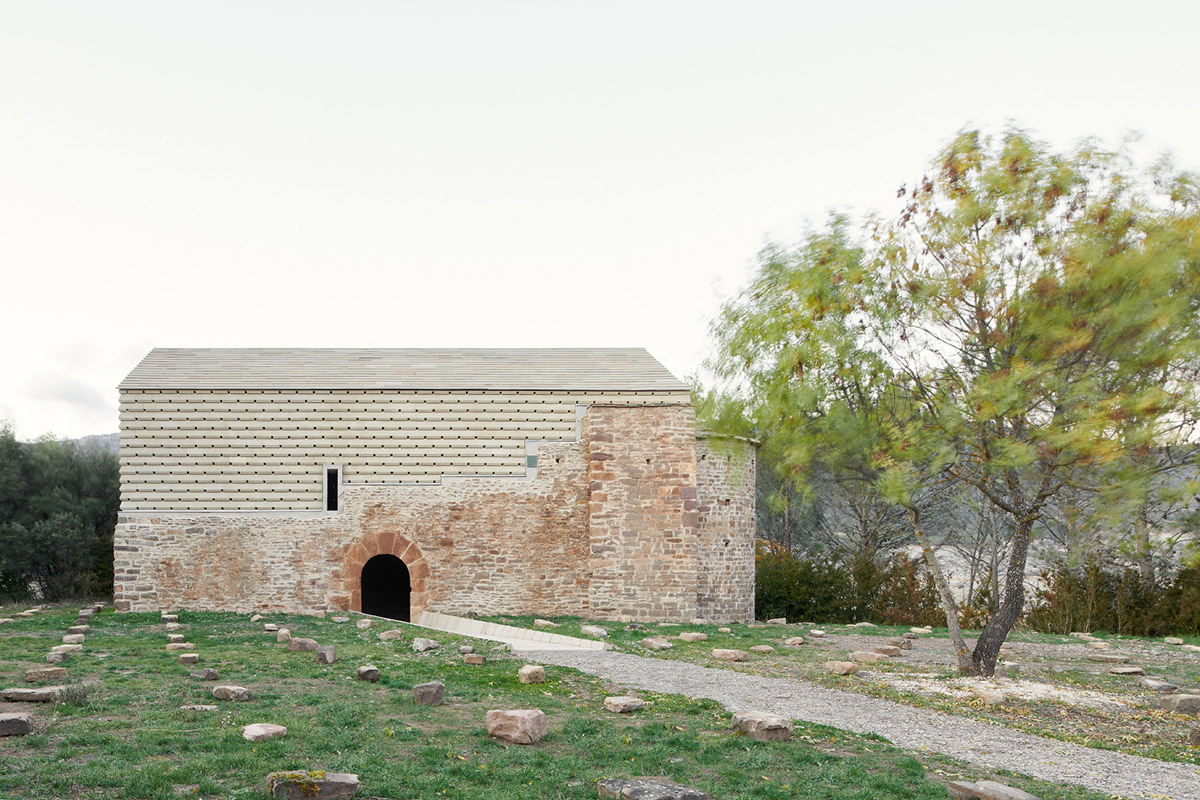 Spanish architecture practice Sebastián Arquitectos SLP has converted an ancient and abandoned hermitage building in the Camino de Santiago, which had one of the most important picture collections of romanesque art in Spain, into a resting space for pilgrims within a forest. 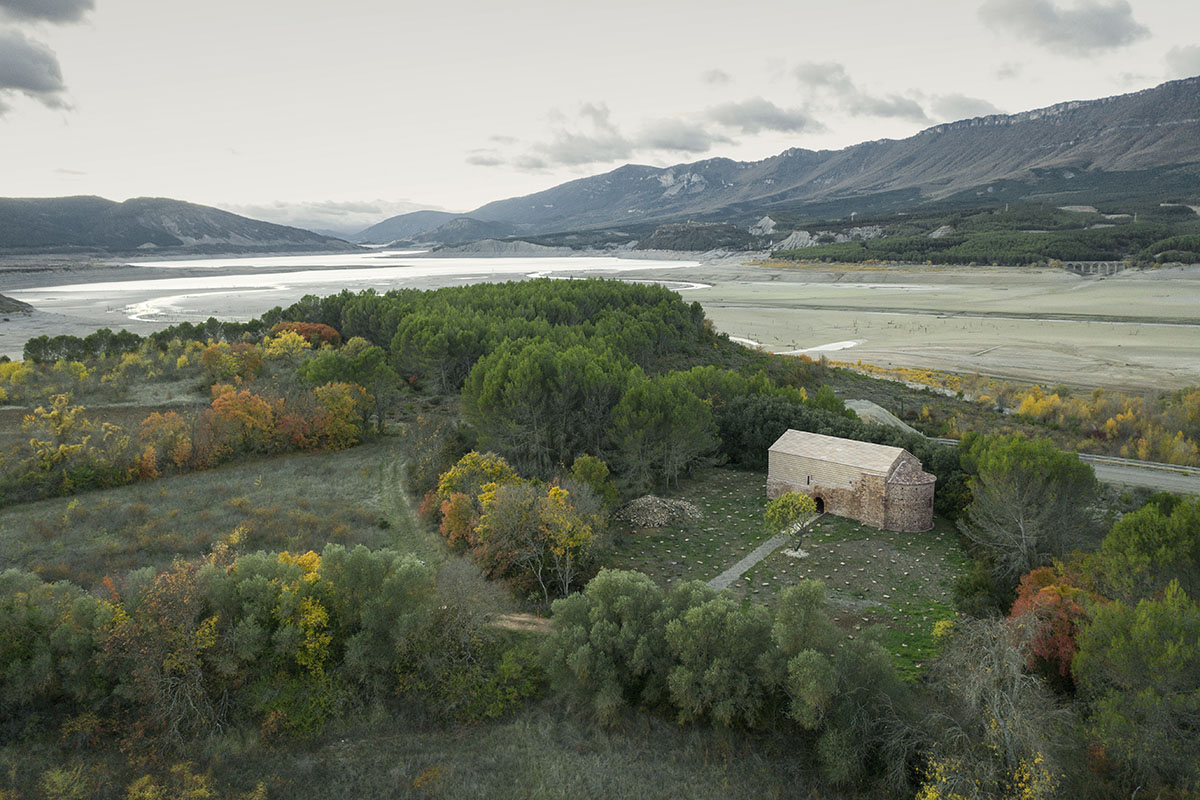 The building, named San Juan de Ruesta Hermitage, ceased to exist in 2001, where administration neglect left into ruins this unique piece of the Camino de Santiago Aragonés, known for having supported one of the collections of Romanesque painting from the since XII most important in Spain, strapped in 1960 and nowadays exhibited in the Diocesan Museum of Jaca. 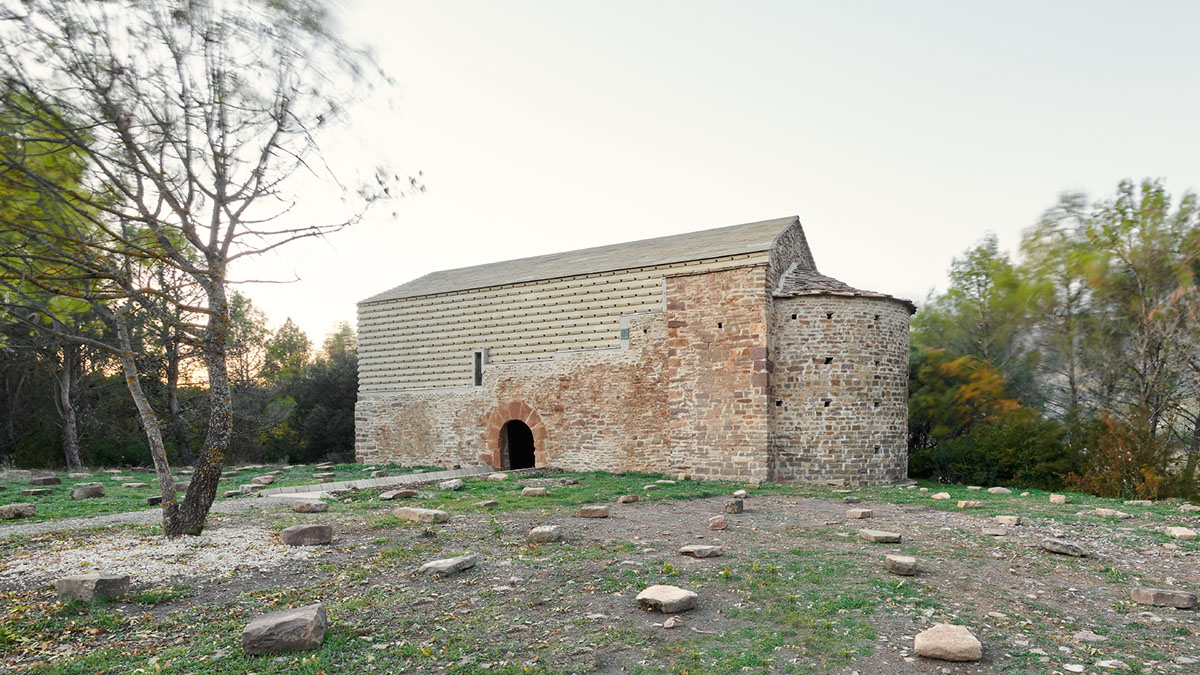 The project was realized as part of a complex plan to recover the Camino de Santiago in this region, the main pilgrim route since XII century in Europe.

The Camino cross an abandoned village, Ruesta, Sebastián Arquitectos SLP have been working on since 2017 consolidating its walls and promoting a camping among the ruins.

The studio revived the building by adopting the essential values of the history that determines its condition and nature. 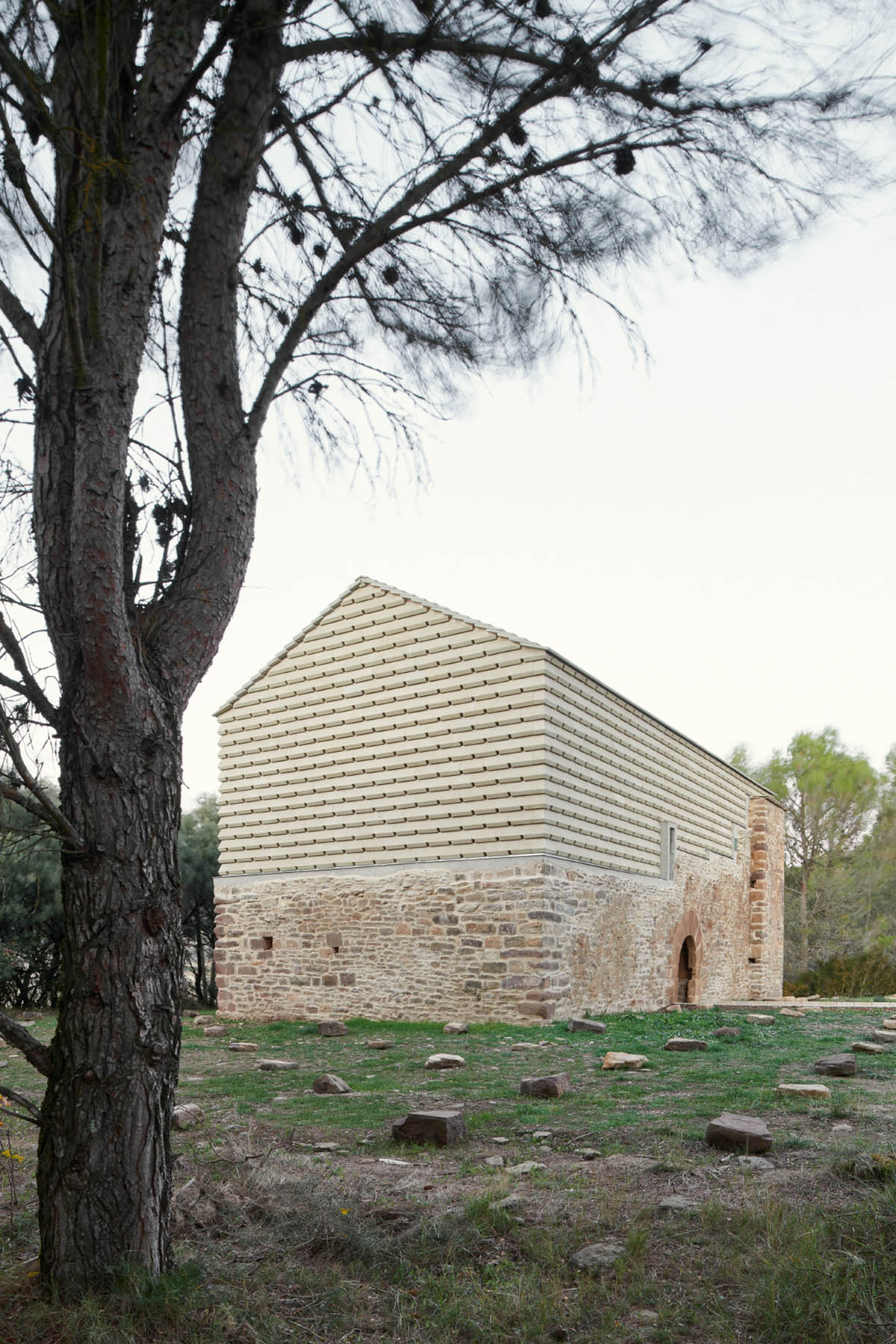 "Time goes and the modifications we make on them transform or even cause the lost of these formative keys. Restoration works have the aim to put the necessary light on this memory to make architecture return to be again," said Sebastián Arquitectos SLP.

As the studio emphasizes, the main purpose of the restoration was to recover the lost powerful volume of the main space, perceived against the beautiful landscape. In the design brief, the criteria was to build it in a contemporary, continuous and abstract language, but based on traditional techniques of stone roofs and walls. 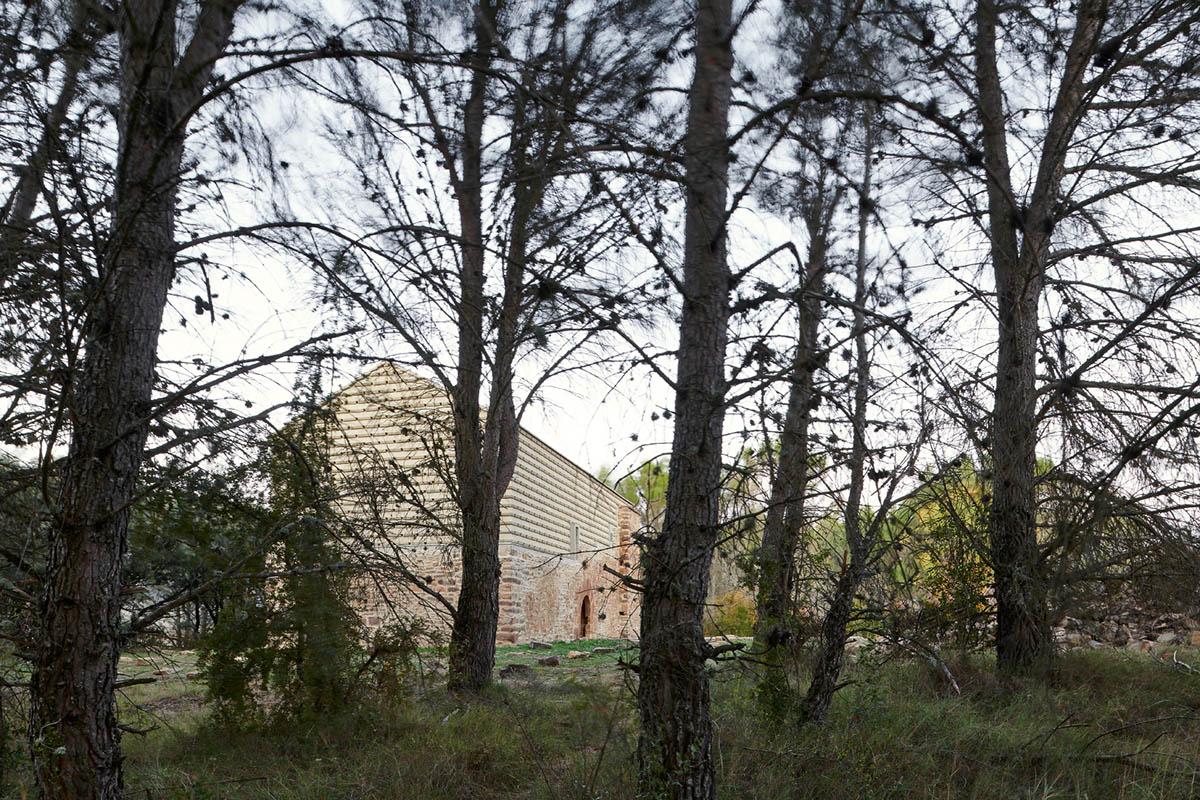 The holes of the new wall produce the atmosphere of half shadow that the original hermitage has in the middle age, and show the difference between new and old.

Stripped of its use and its paintings, only a few wall canvases and the apse of a volume that previously stood as compact and powerful against the landscape of the river Aragón and the mountains of Leyre, close to an insolent pile of stones  originating from of its partial demolition in 2002. Outside a piece of art recover the original stones as a memorial, remembering us the nature of time and the return of the material to the land. 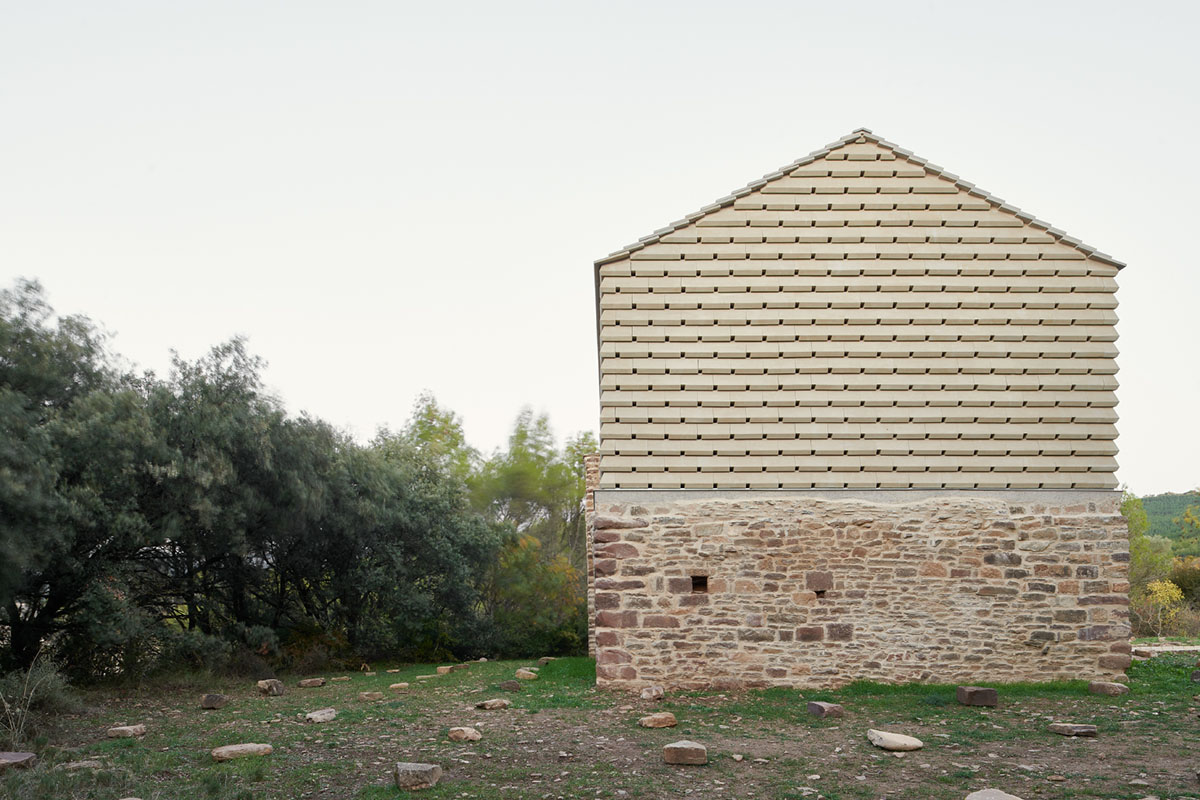 Intervention over the ruins requires a criterion, a main intention. In this case it was to recover this strong volume against the trees that surround it, discovered between the trunks of oaks and holm oaks, and that will give a space in shade to the pilgrim in the one to make a stop on the road to Santiago. 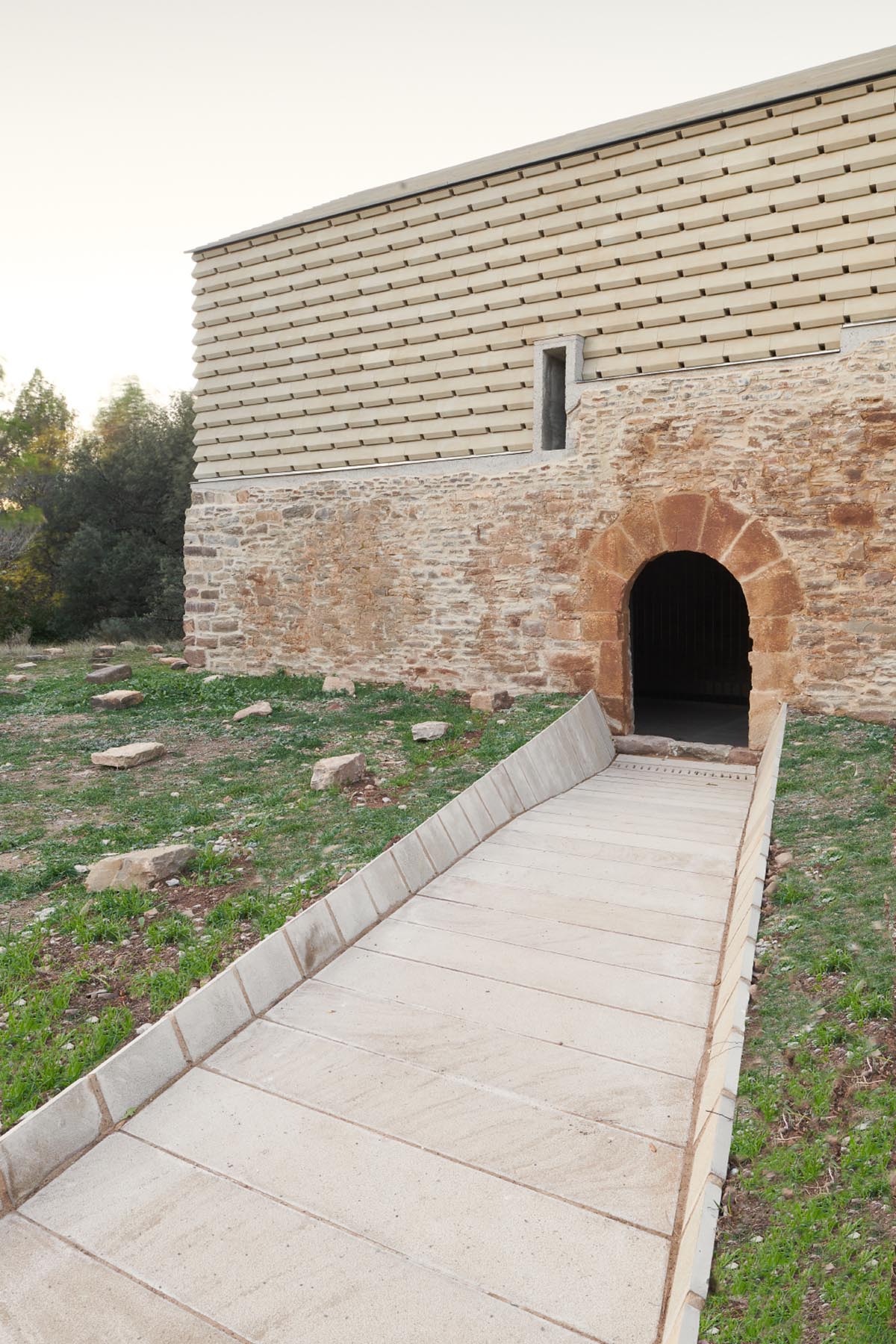 From the beginning of the design stage, the architects have carried out a critical restoration process, where the new volume, of approximately 60 per cent of the main nave, rests on the previous one with an abstract and unitary language, a set of horizontal lines that, following the plot of the original masonry and holes, establishes a recognizable language for the new intervention.

The new volume is slightly delayed with respect to the existing plan of façade, which, in turn, already adopted a setback position in the 18th century when the central nave had to be rebuilt for unknown reasons. 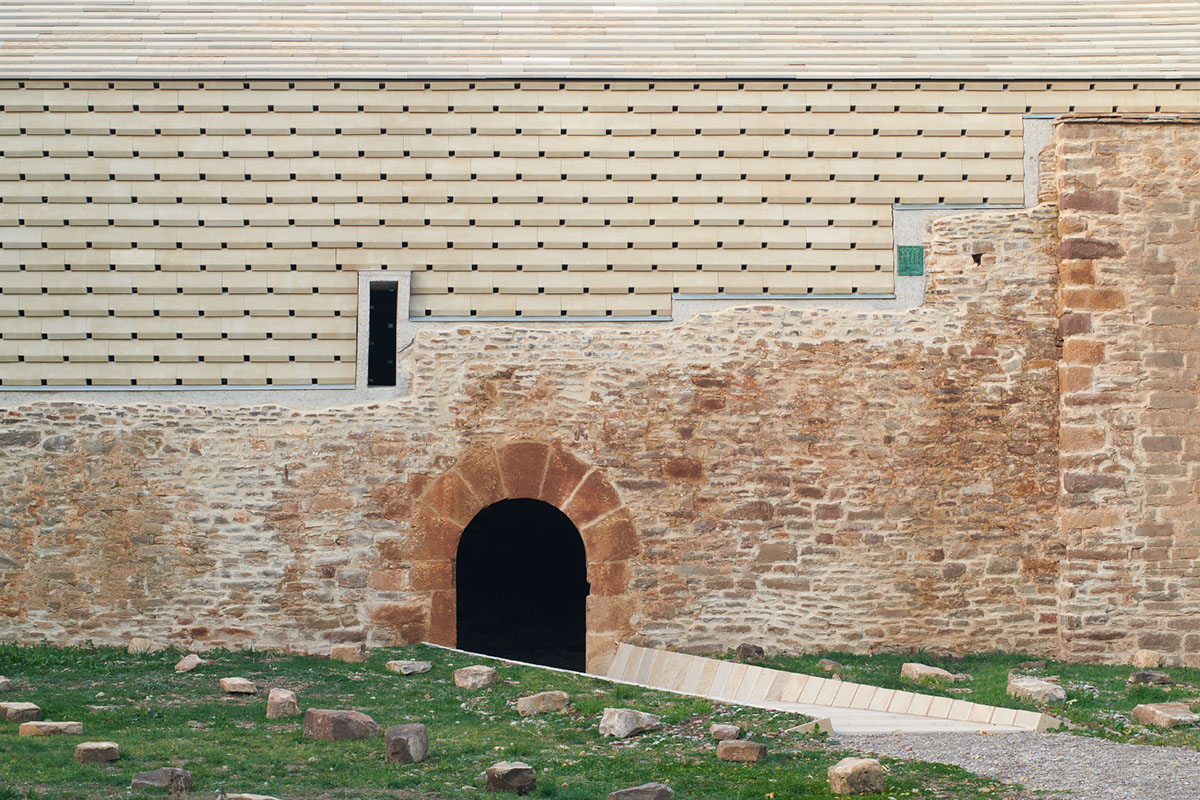 The roof slabs, linked to the vernacular construction, slide down the façade, granting a single firgurative detail to the eaves that evokes the position of the original and to the gap lost over the access of which only photographic evidence remained.

A system of carved stone ashlars continues this horizontal cutting, and opens to the interior a latticework of mechinales in charge of building the original atmosphere of the hermitage, bringing the gloom that one day, centuries ago, this space had. 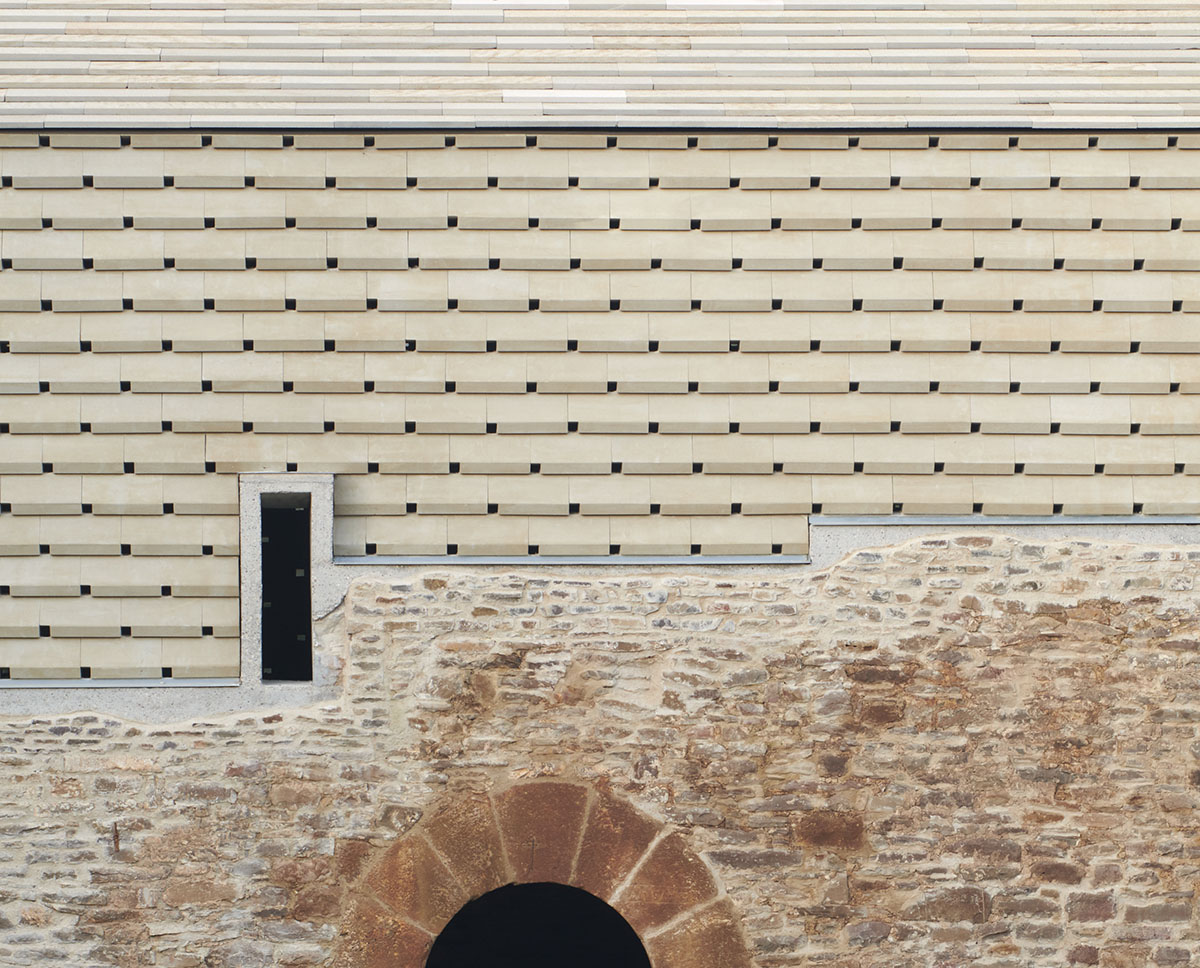 Outside today a memorial extends over the field that surrounds the hermitage, a glimpse of those insolent stones from the demolition unfold as a beautiful ordering plot that accompanies the pilgrim bringing him the memory and artistic will that one day they had.

The project has received several prizes such as Hispania Nostra 2021 or García Mercadal, Ricardo Magdalena 2020 and was selected to be presented in the last Bienal Española de. Arquitectura. 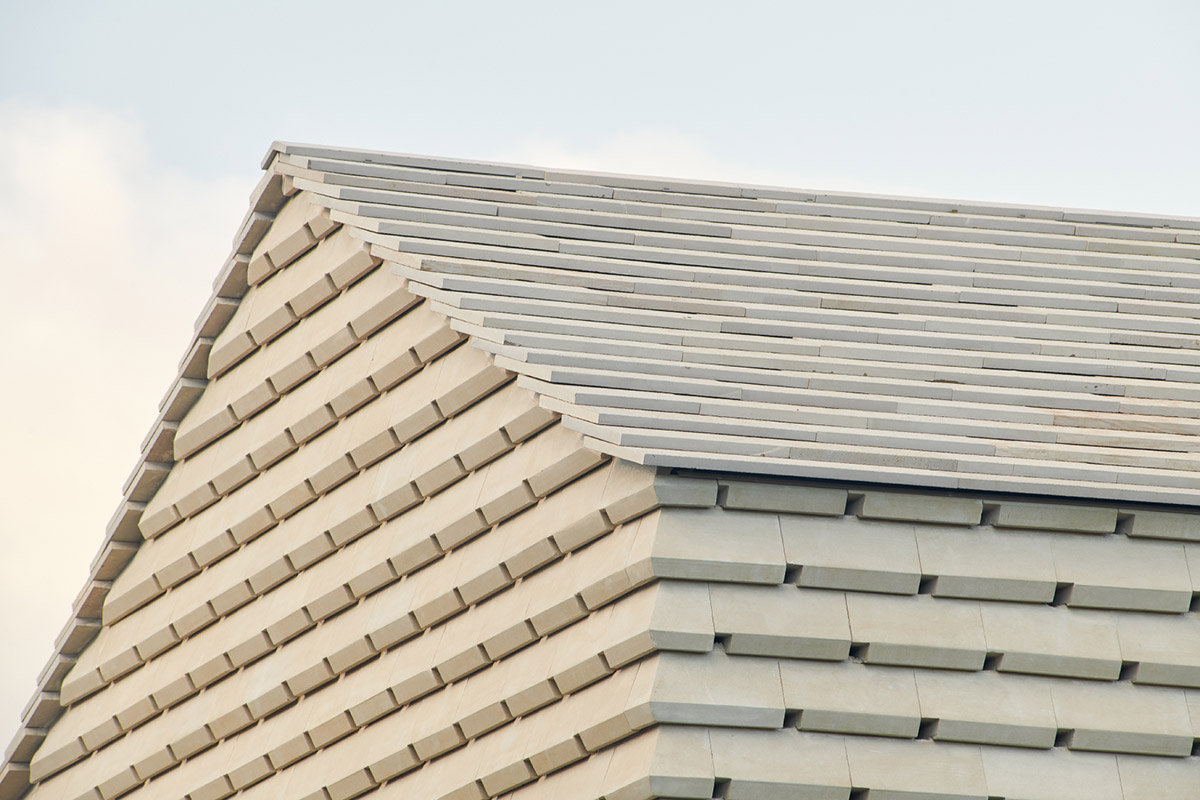 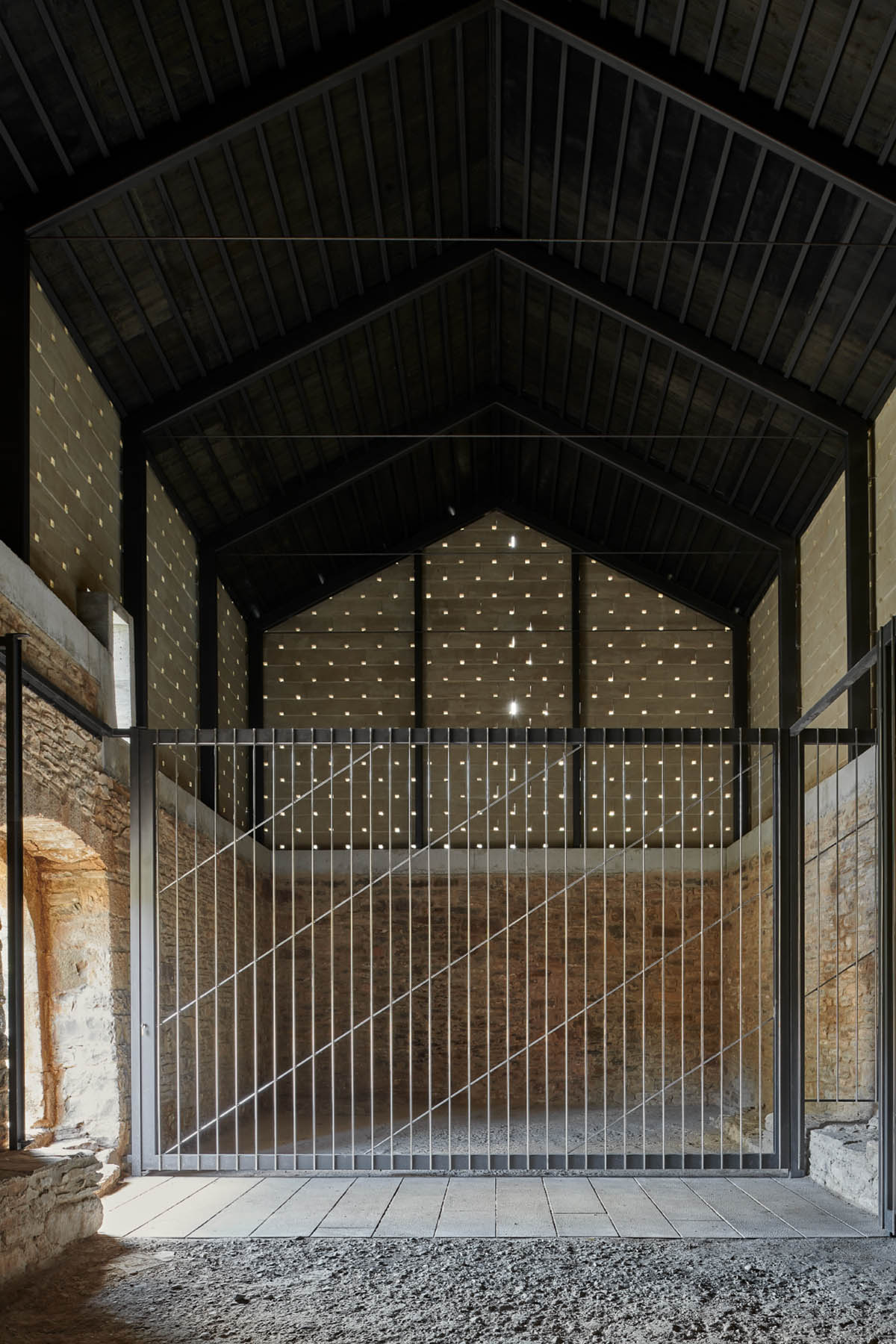 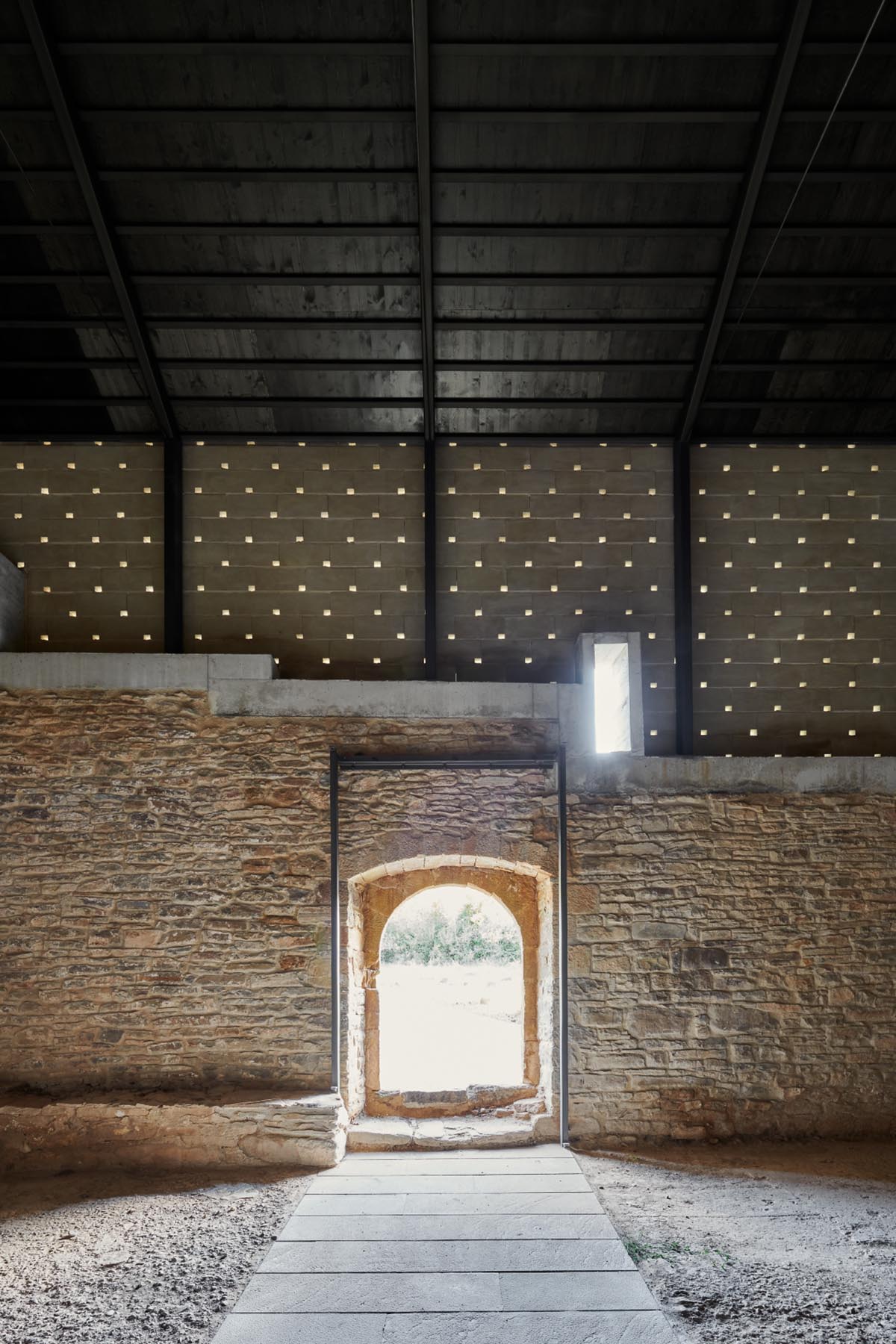 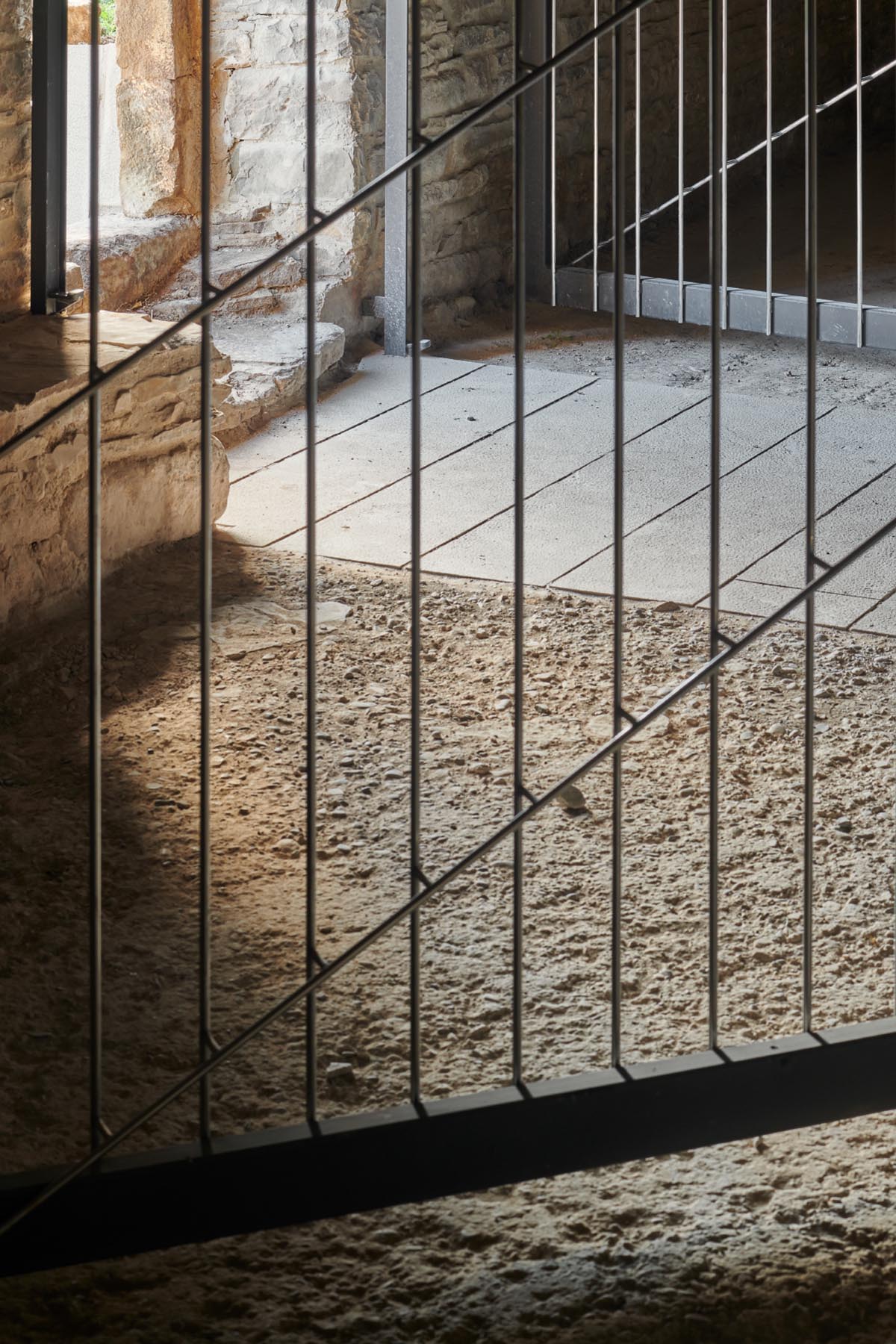 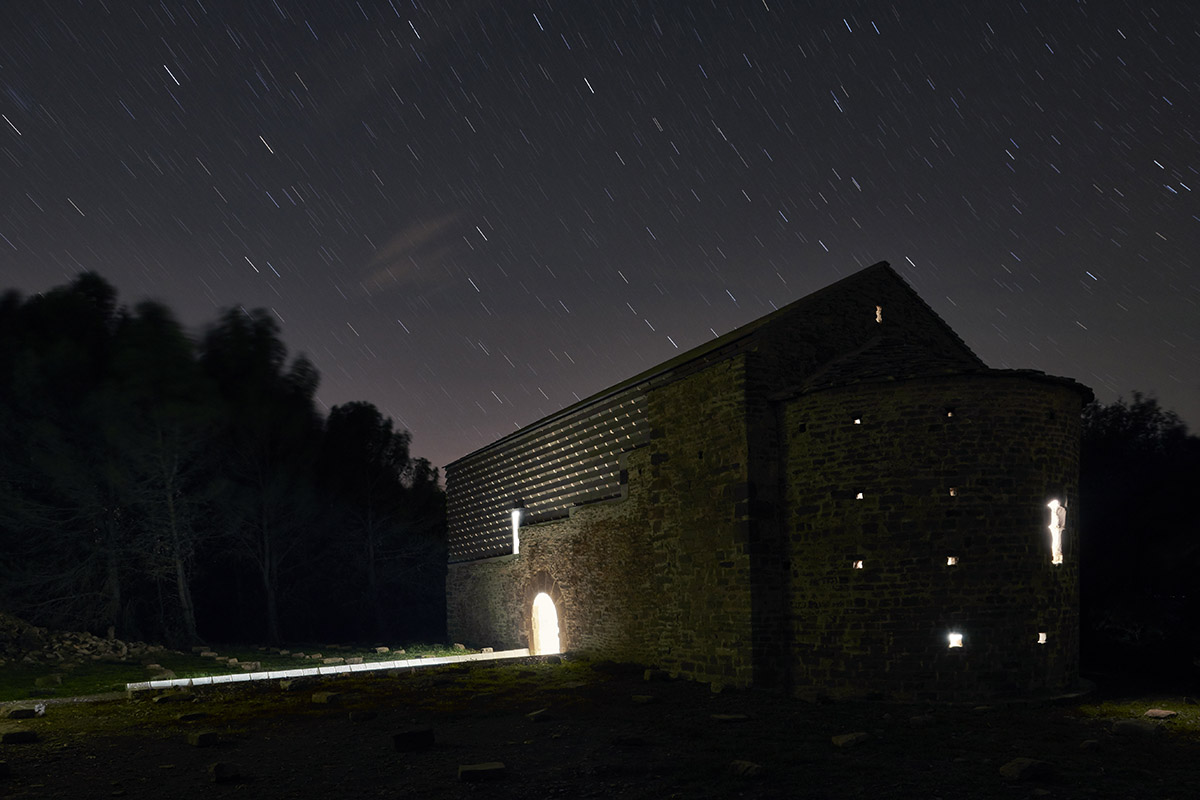 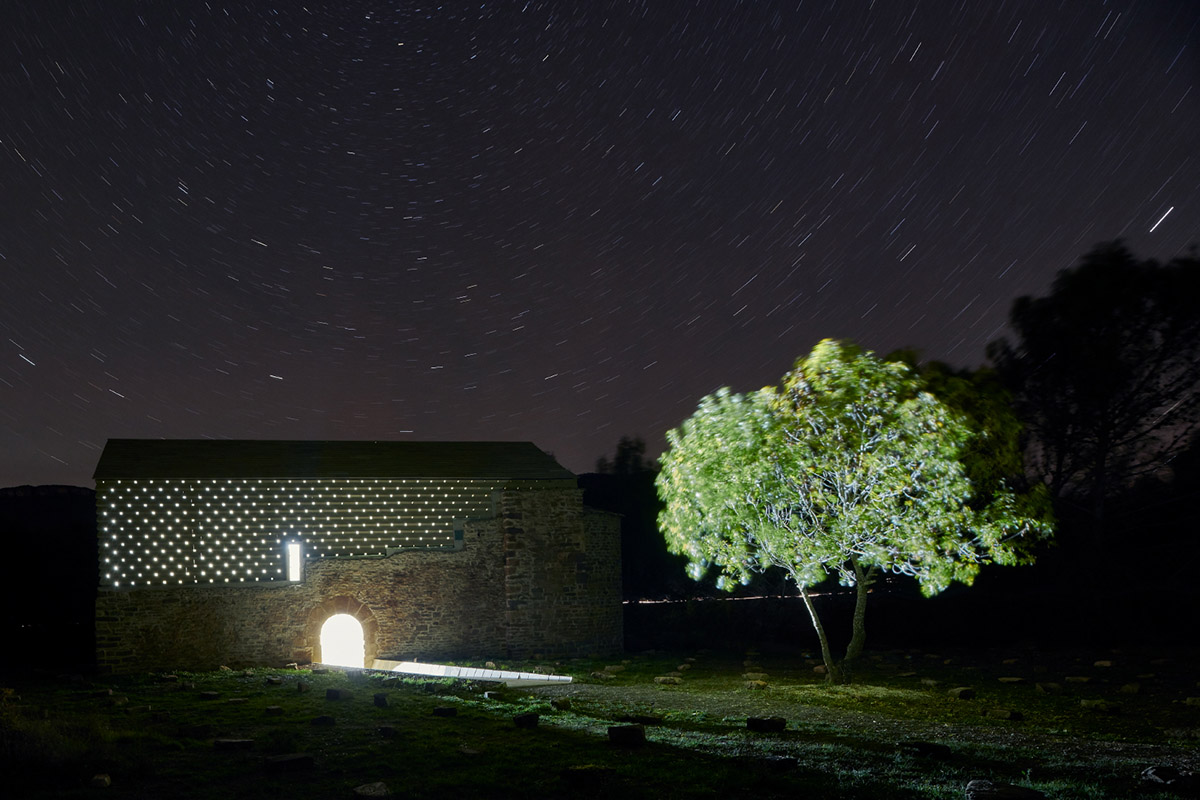 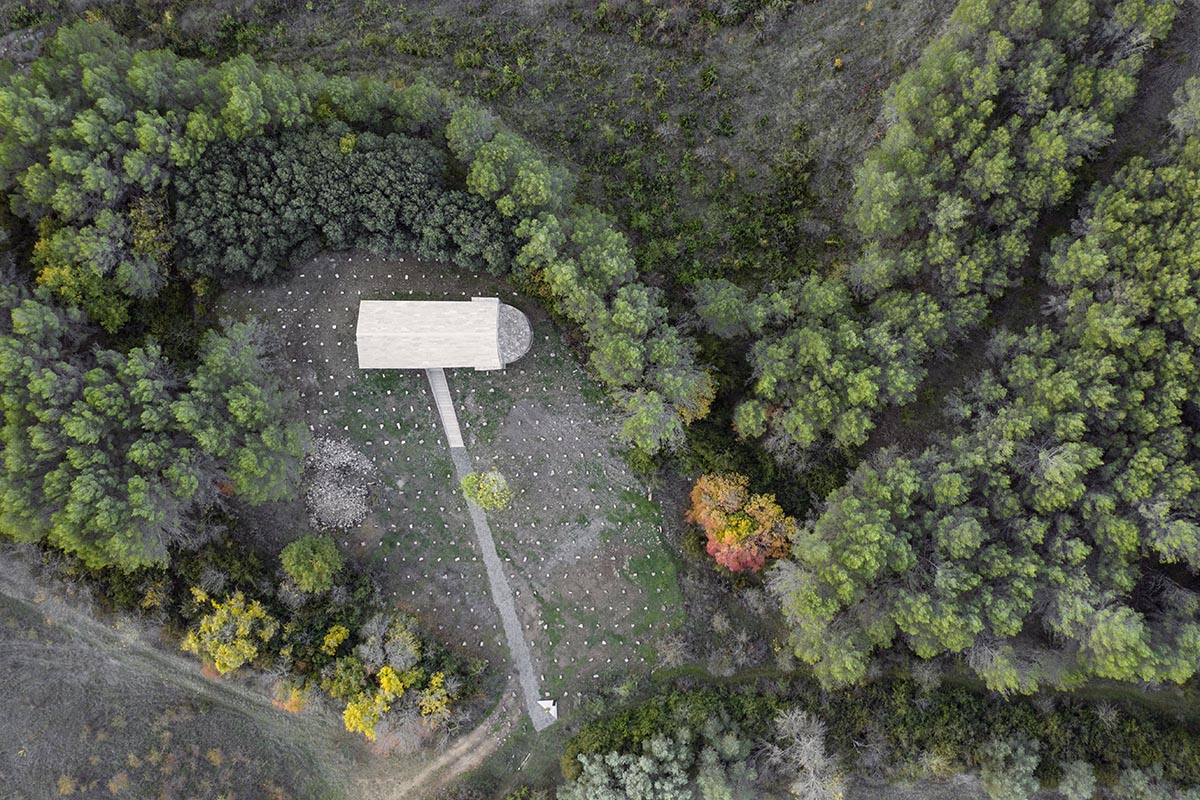 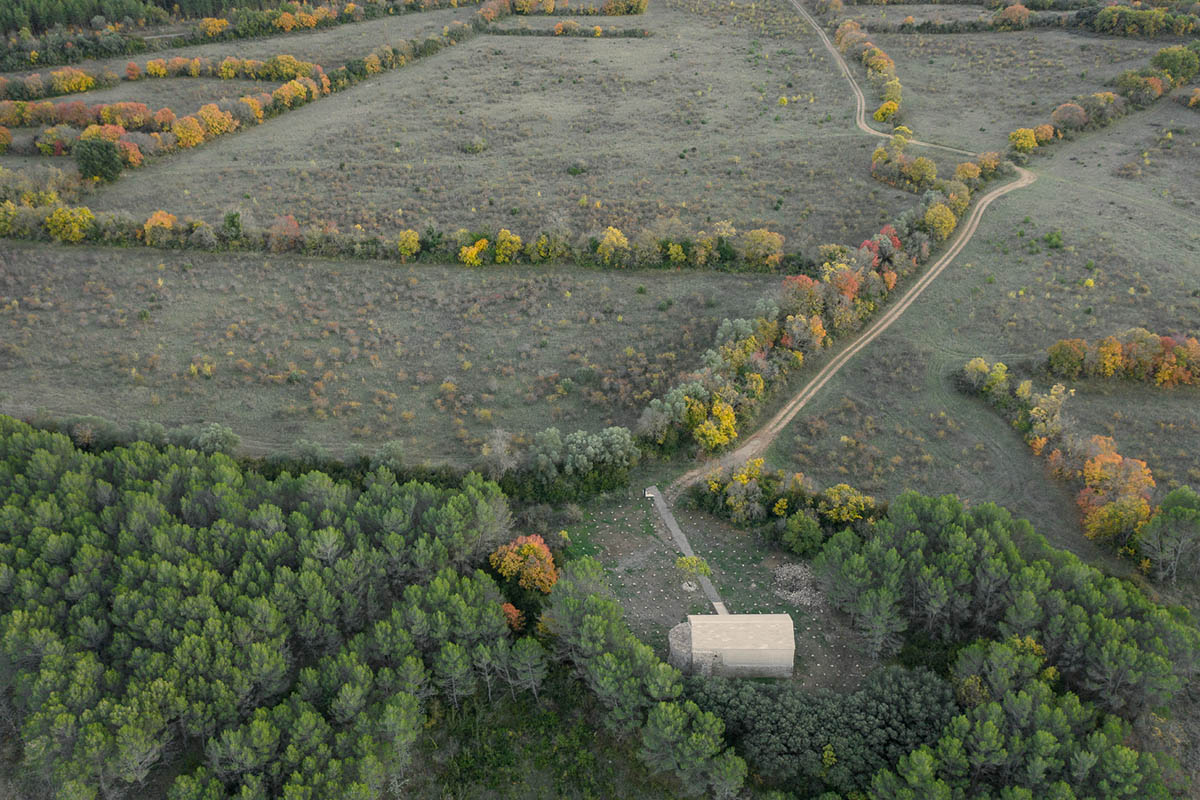 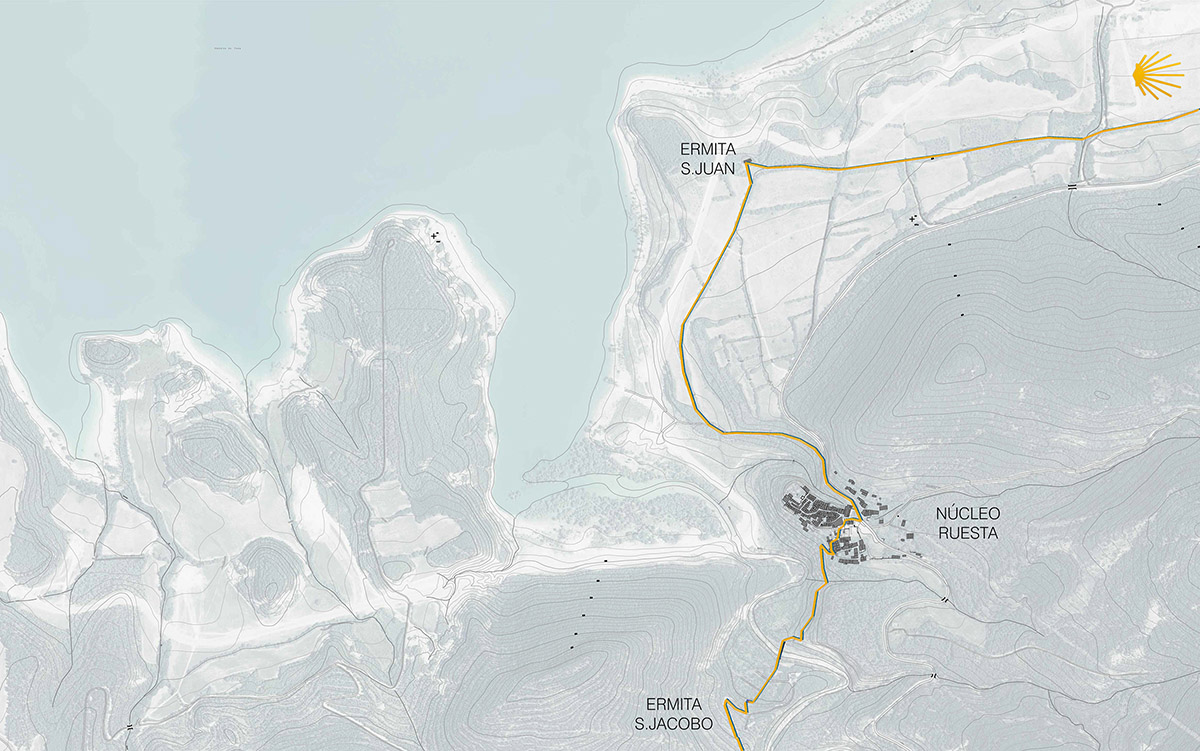 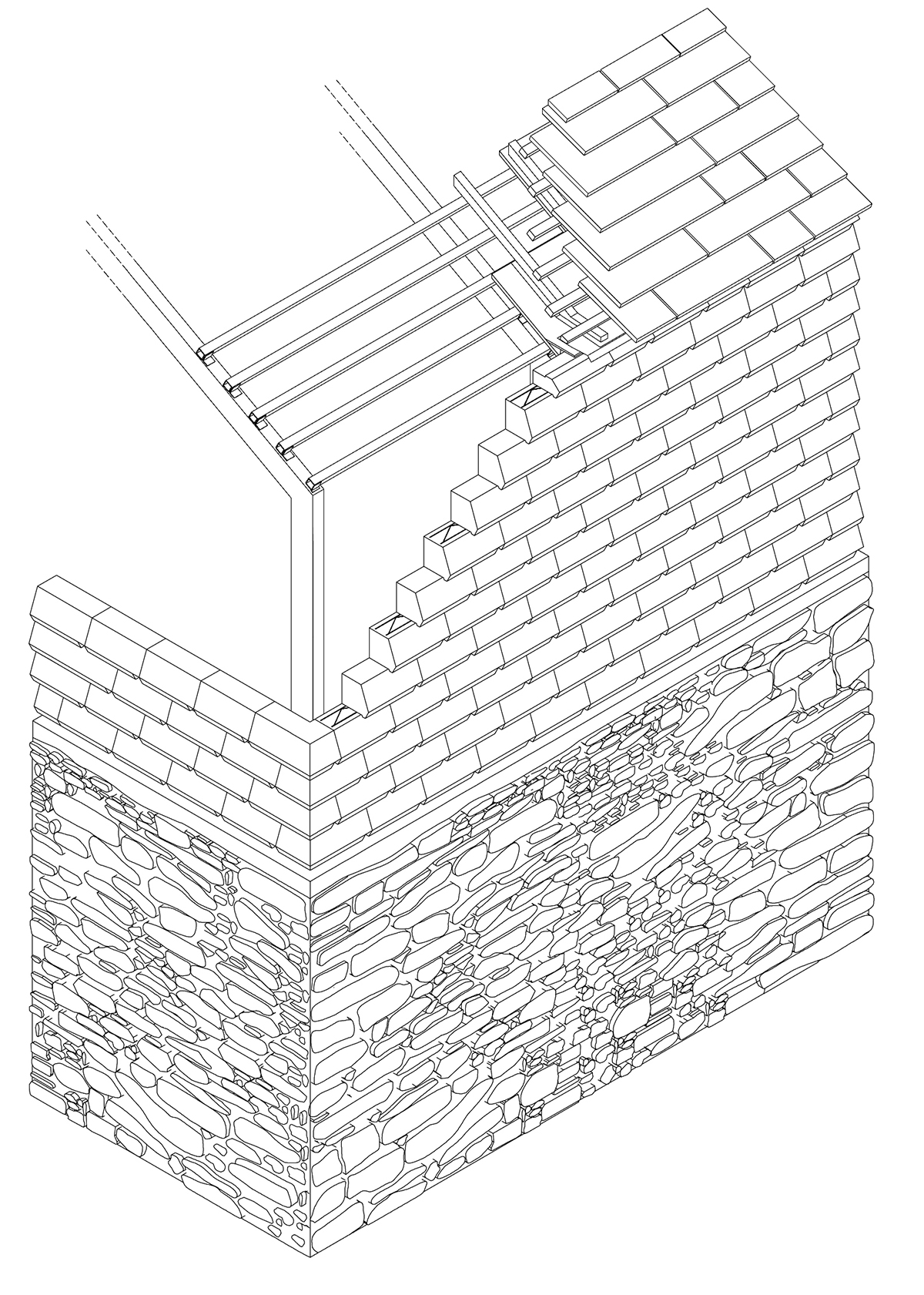 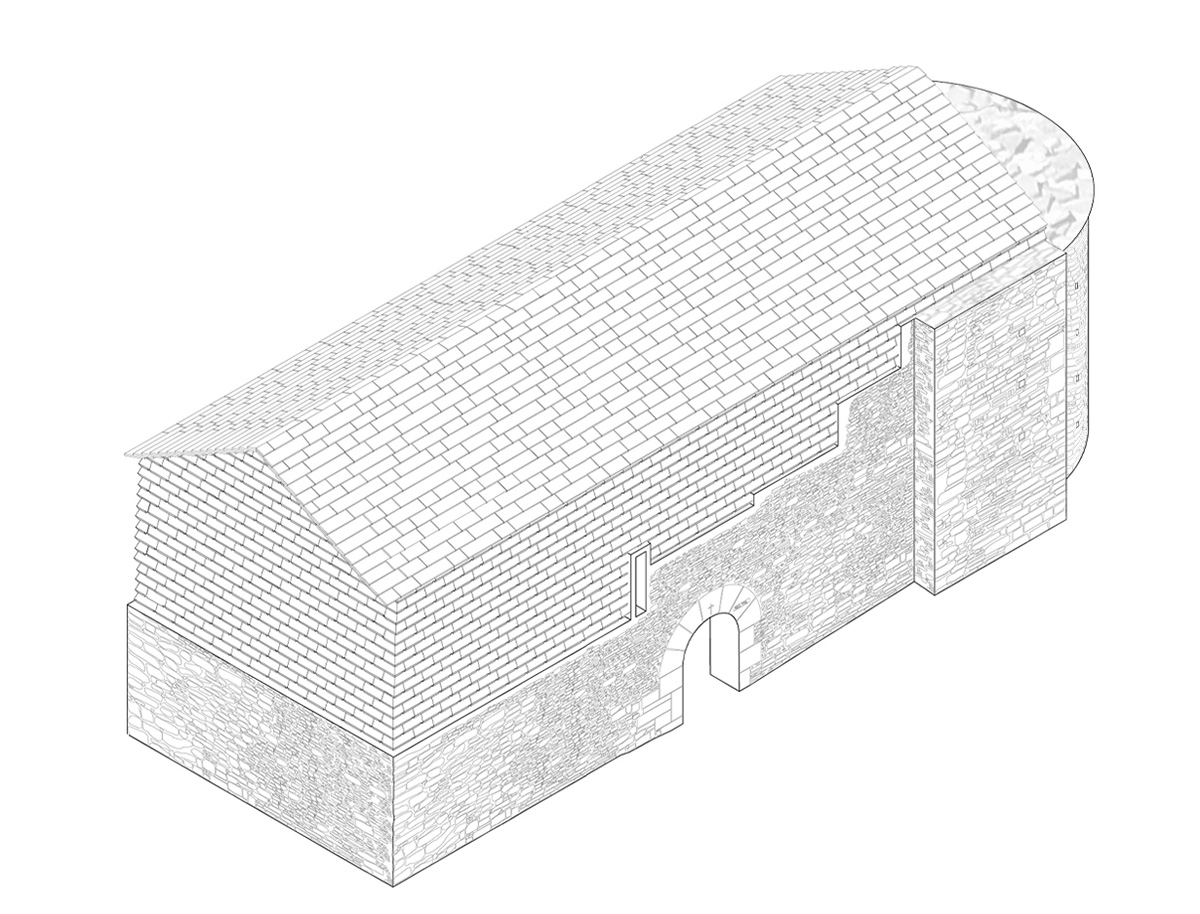 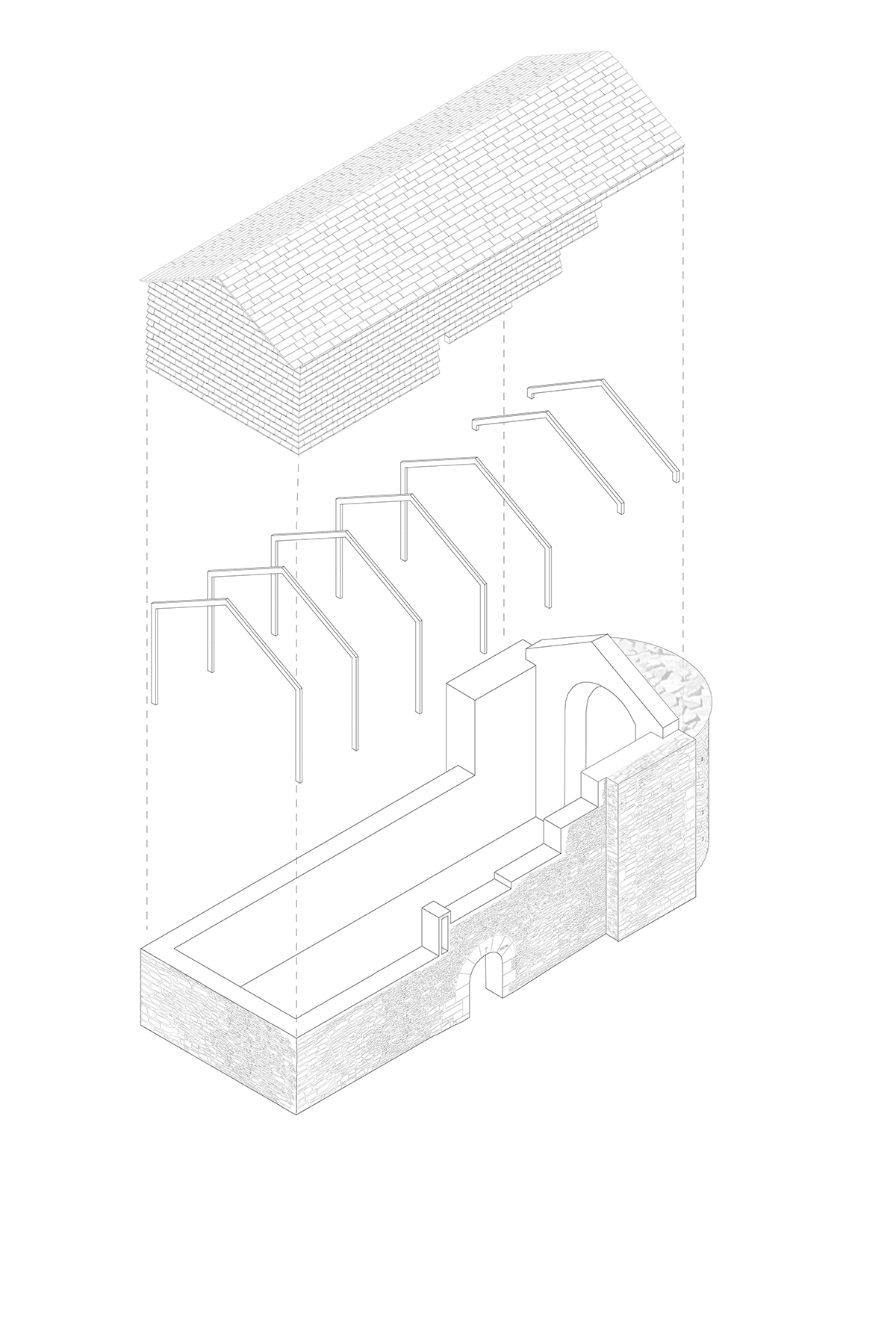