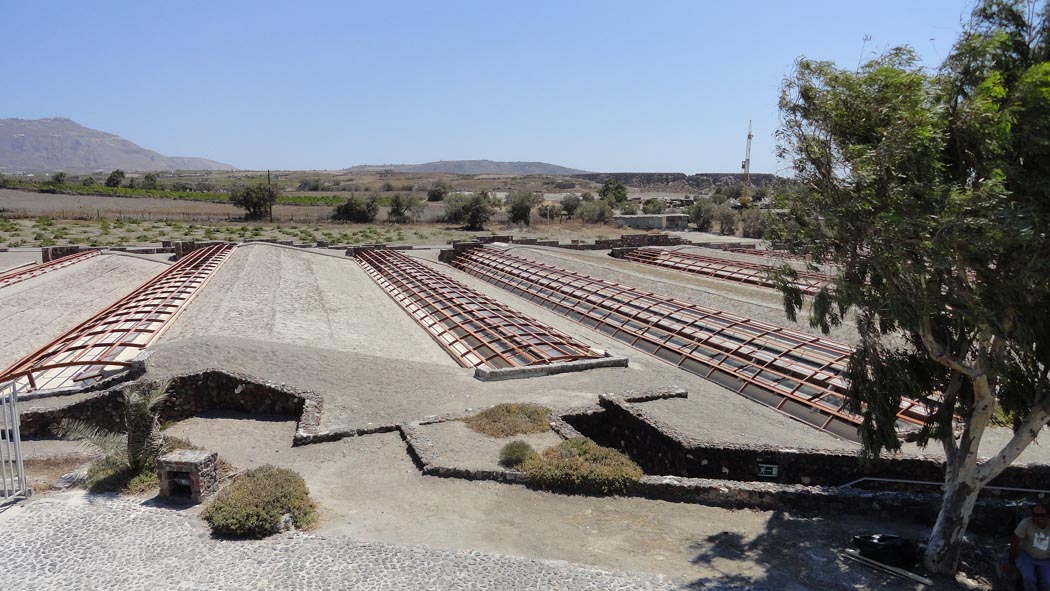 Nikos Fintikakis, co-founder of Synthesis and Research, created a bioclimatic shelter for Akrotiri Archaeological site in Greece in order to protect the historical monuments from natural environmental factors. The pilot project was implemented to replace the old shelter coincided with the announcement by the European Union of a project for the exploitation of renewable energy sources (Joule Solar House 1994-1999).

The Architect Nikos Fintikakis’s idea of combining this project with the protection of the archaeological site at Akrotiri was adopted by the Archaeological Society in Athens and endorsed by the relevant committee of the European Union. The research project under the name 'aspire' (Archaeological Sites Protection Implementing Renewable Energy) was completed with a pilot application, in which the bioclimatic character of the new shelter was confirmed: natural ventilation and lighting of the archaeological site, as well as comfortable temperature for those who move inside it are achieved without any energy-consuming mechanical support.

The basic design approach of the new shelter is based on the Aristotelian philosophy that the natural bodies are alloys from the four elements (earth, water, air, fire) each one of which incorporates the basic qualities (earth: cool/dry, water: cool/humid, fire: warm/dry).

So, in the project -the earth-insulates the roof with a layer of earth he ensured thermal comfort inside, while harmonizing the enormous surface of the shelter with the natural environment. 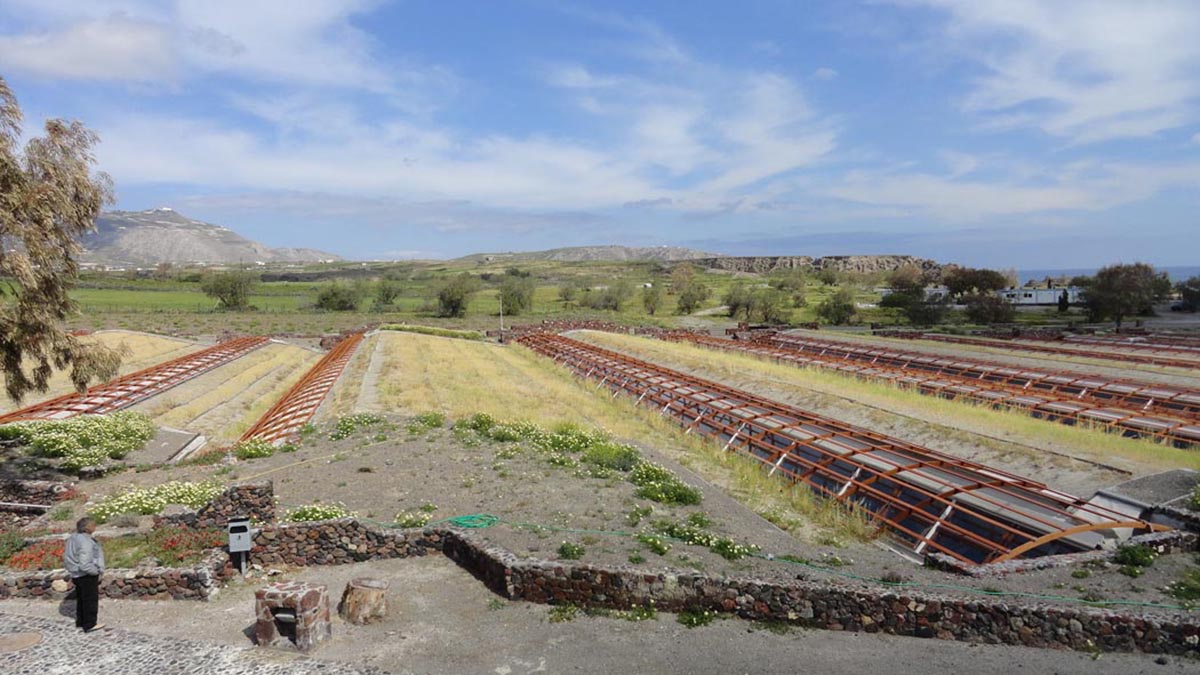 Water acts as a rain collector, the 3-acre large surface of the shelter guarantees large quantities of fresh water, to cover the needs of the excavation in the waterless island of Santorini. Air forms the rows of windows with north orientation and automatically regulated opening at night, on the one hand facilitate renewal of the air while cooling the inside of the archaeological site, and on the other hand during the day provide abundant diffused light enhancing the monuments, and for fire-the special glass of the windows protect from solar radiation (fire). This management of the archaeological site allowed the harmonious enhancement of all the values it incorporates: historical/scientific, aesthetic, educational, social. 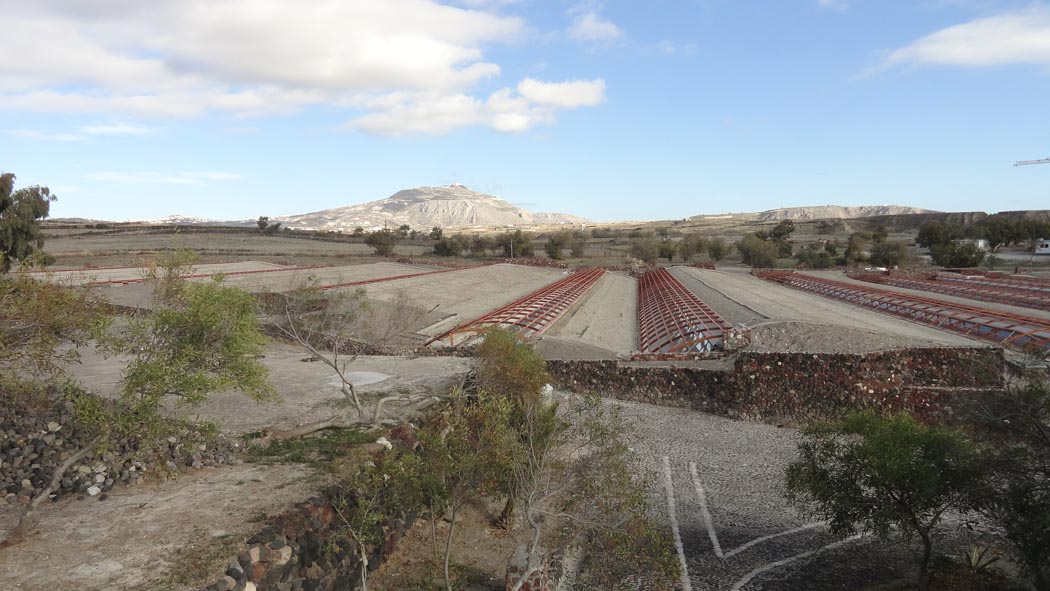 The site introduces a concise history touching upon its infrastructure and remnants of impressive buildings. The small Neolithic village grew gradually and during the Early Bronze Age (3rd millennium BC) developed into a proto-urban centre and harbor-town for intra-Aegean transactions. 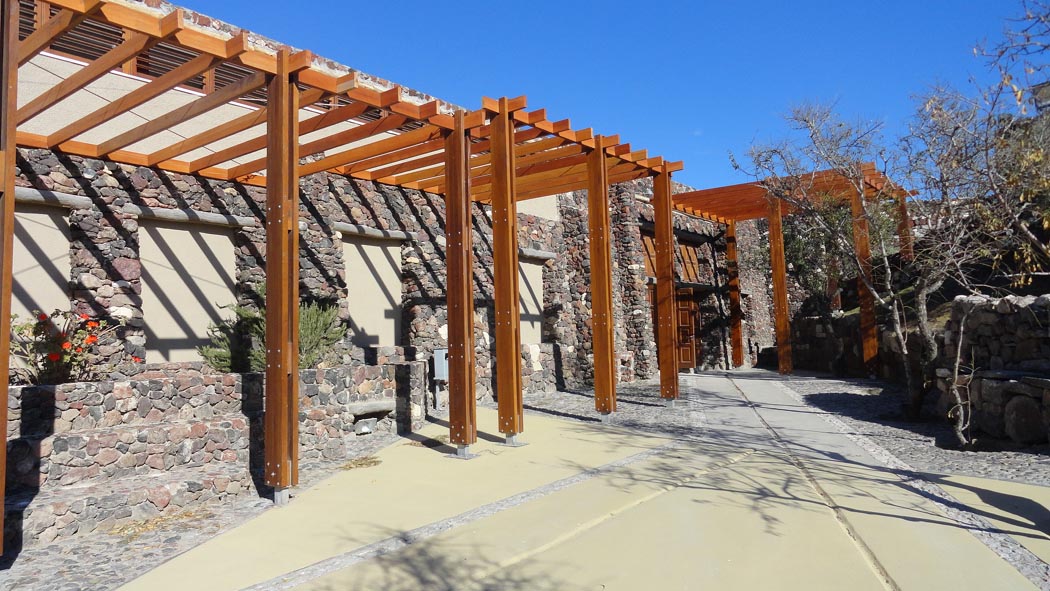 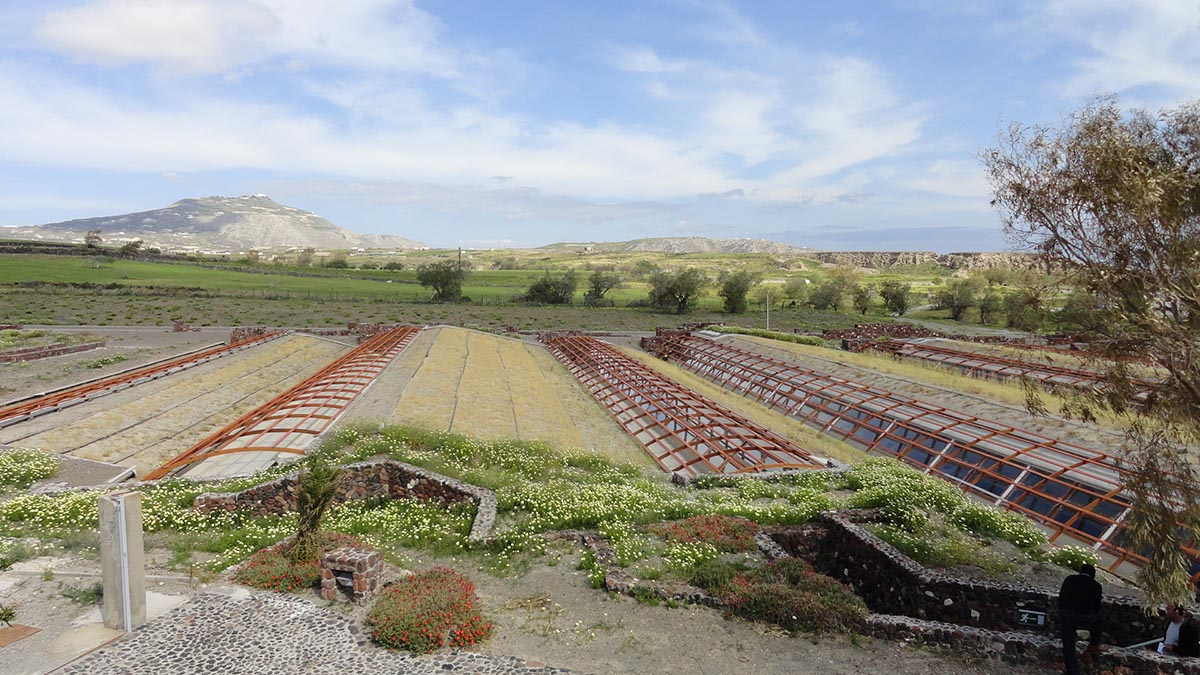 From the ruins caused by a major seismic destruction, the Middle Bronze Age (ca 2100-1650 BC) port-city emerged, which expanded its maritime trade far beyond the Aegean, to the East Mediterranean. Remnants of impressive buildings with rich contents and the drainage-sewage system of the city bear witness to its affluence.

Soon after the mid 17th century BC (Late Bronze Age), an earthquake once again destroyed the city, which was rebuilt with more impressive, public and private buildings. Indicative of the wealthy citizens’ mentality is a desire to promote their social status by adorning their houses with wall-paintings of exquisite art. 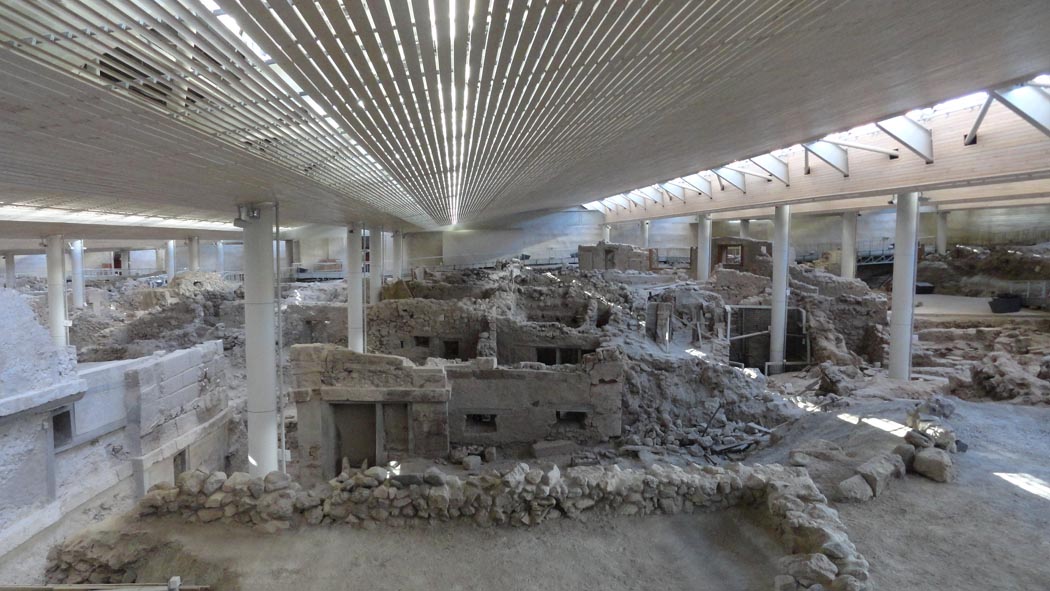 This society was hit by yet another earthquake, just before the eruption of the volcano towards the end of the 17th century BC. The burial of the city under thick layers of pumice and volcanic ash trapped the picture of Theran society, which the archaeological spade brings to light. 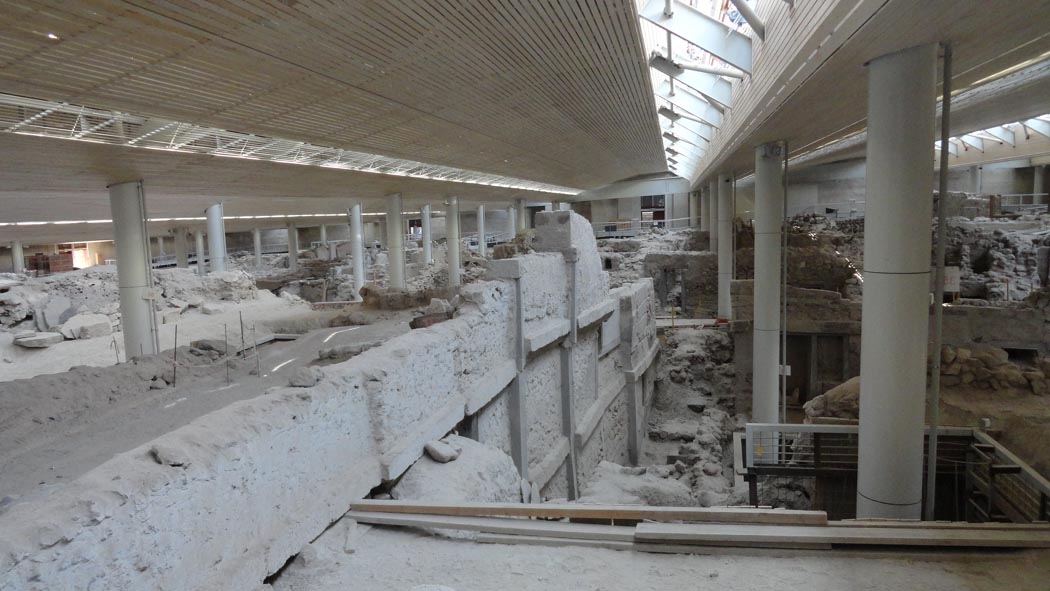 Synthesis and Research Ltd was established in 1983 by the architects George Albanis and Nikos Fintikakis. The company has dynamically expanded and strengthened with the inclusion of highly qualified partners, academic consultants and an experienced, specialised professional staff. 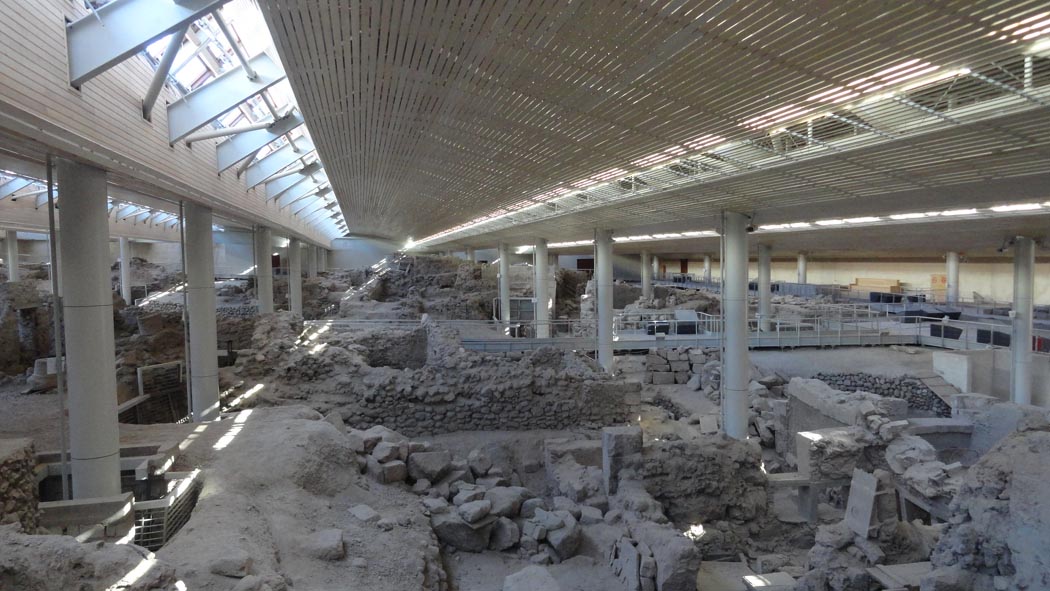 Nikos Fintikakis is Honorary Member of World Architecture Community and he was the jury member in the Science City International Architectural Competition. 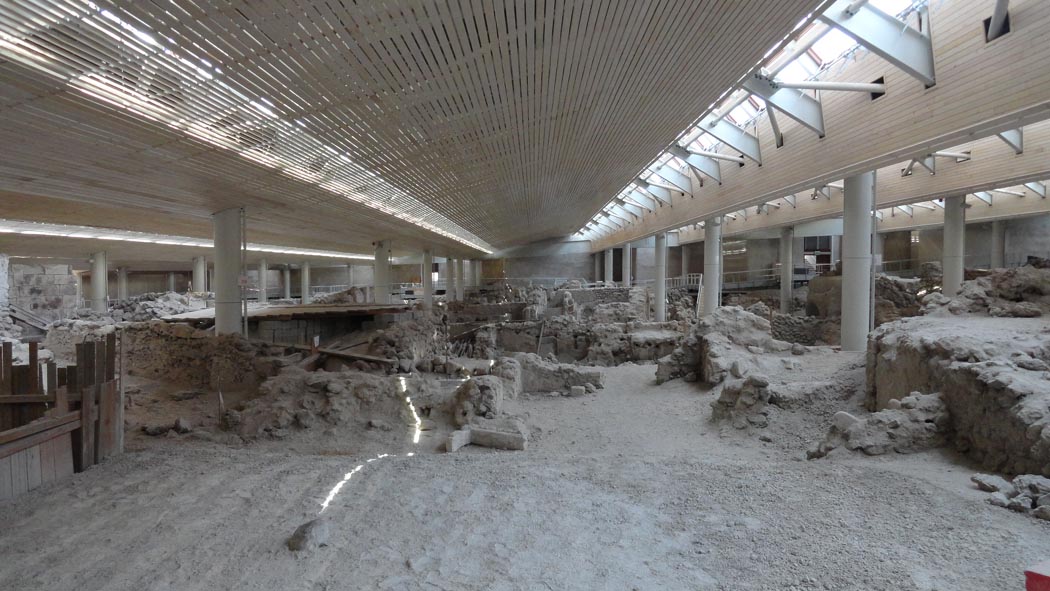 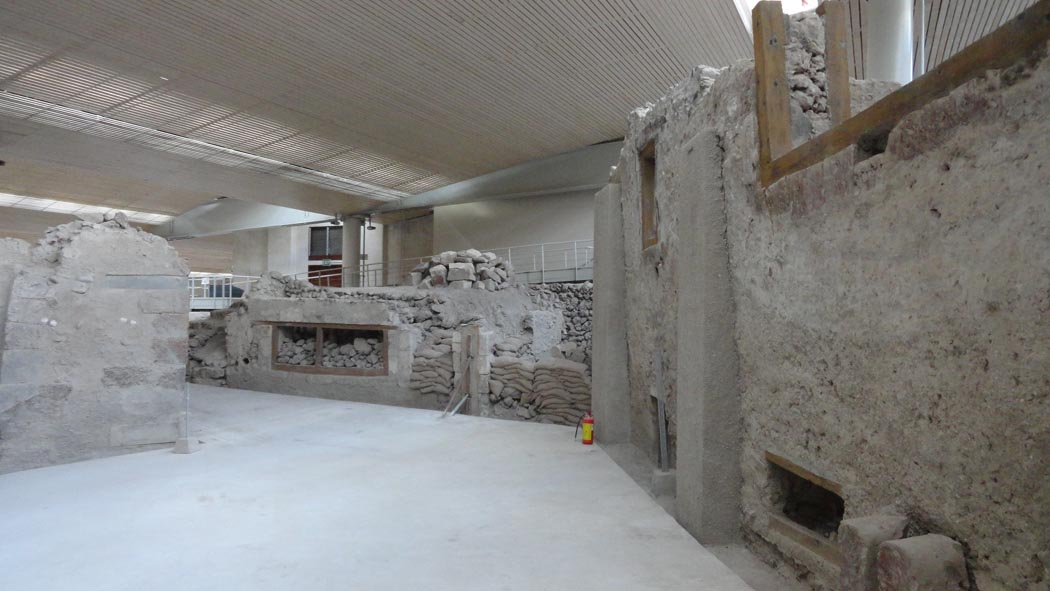 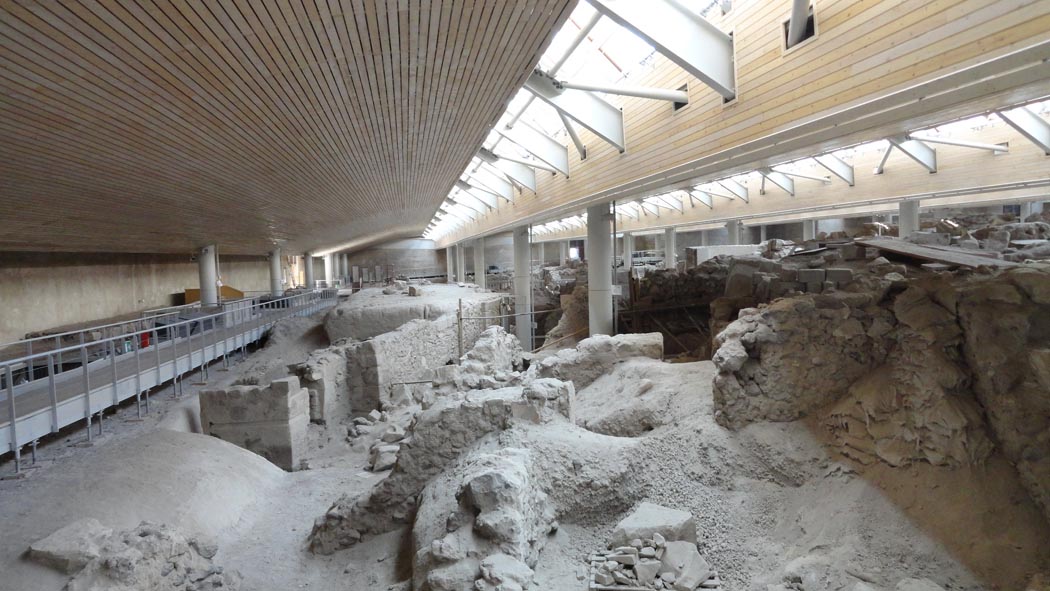 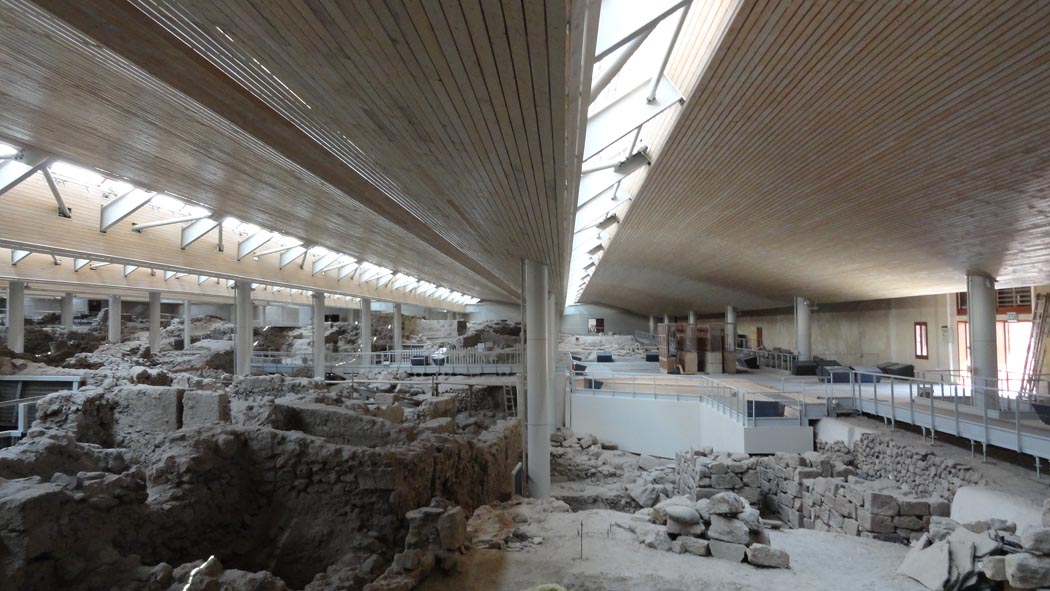 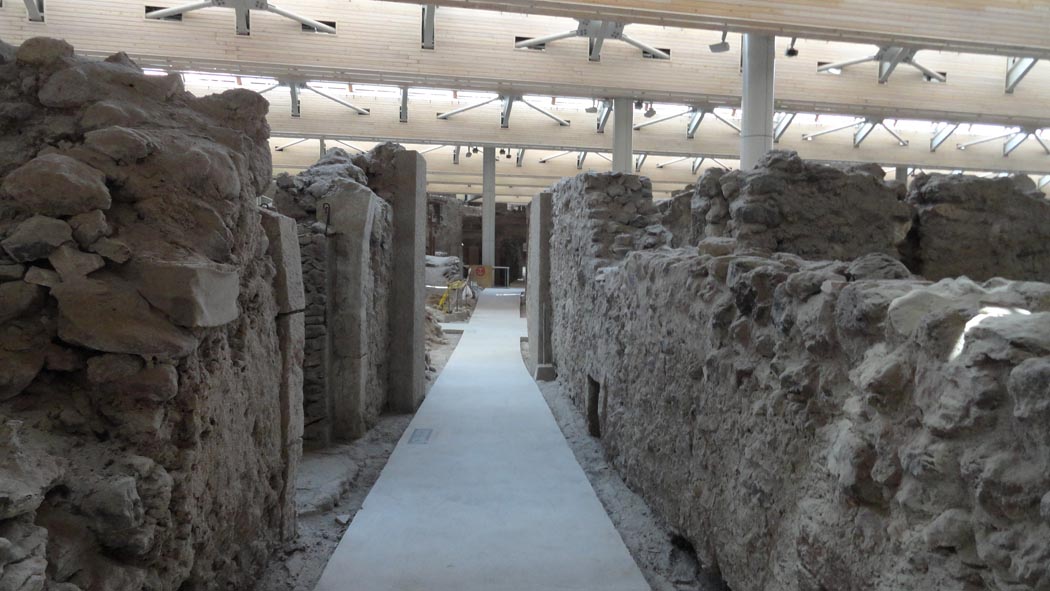 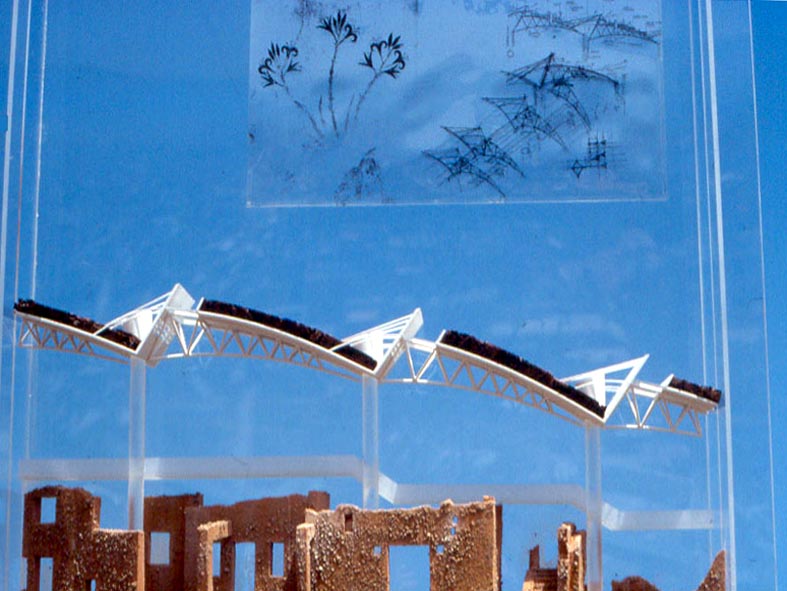 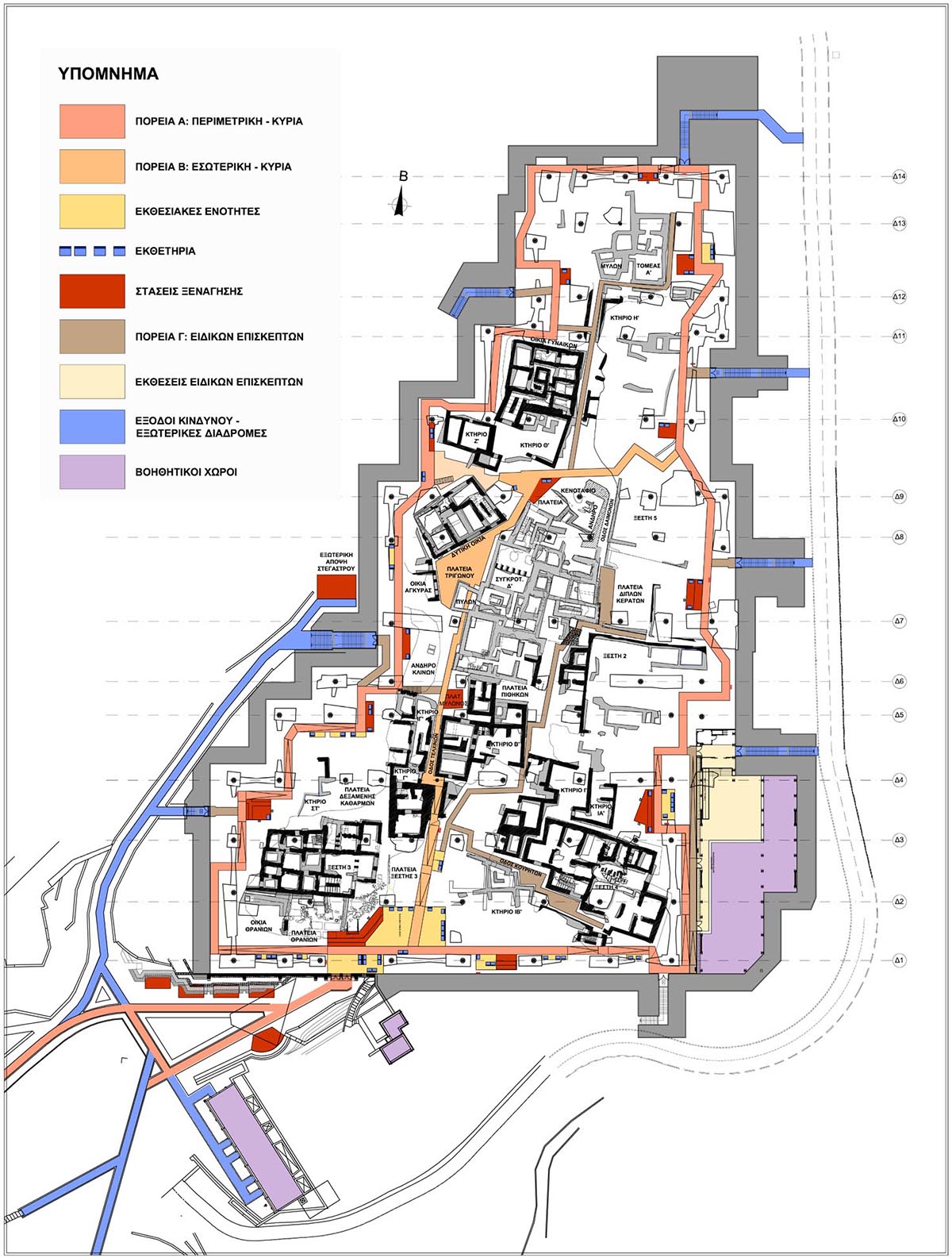 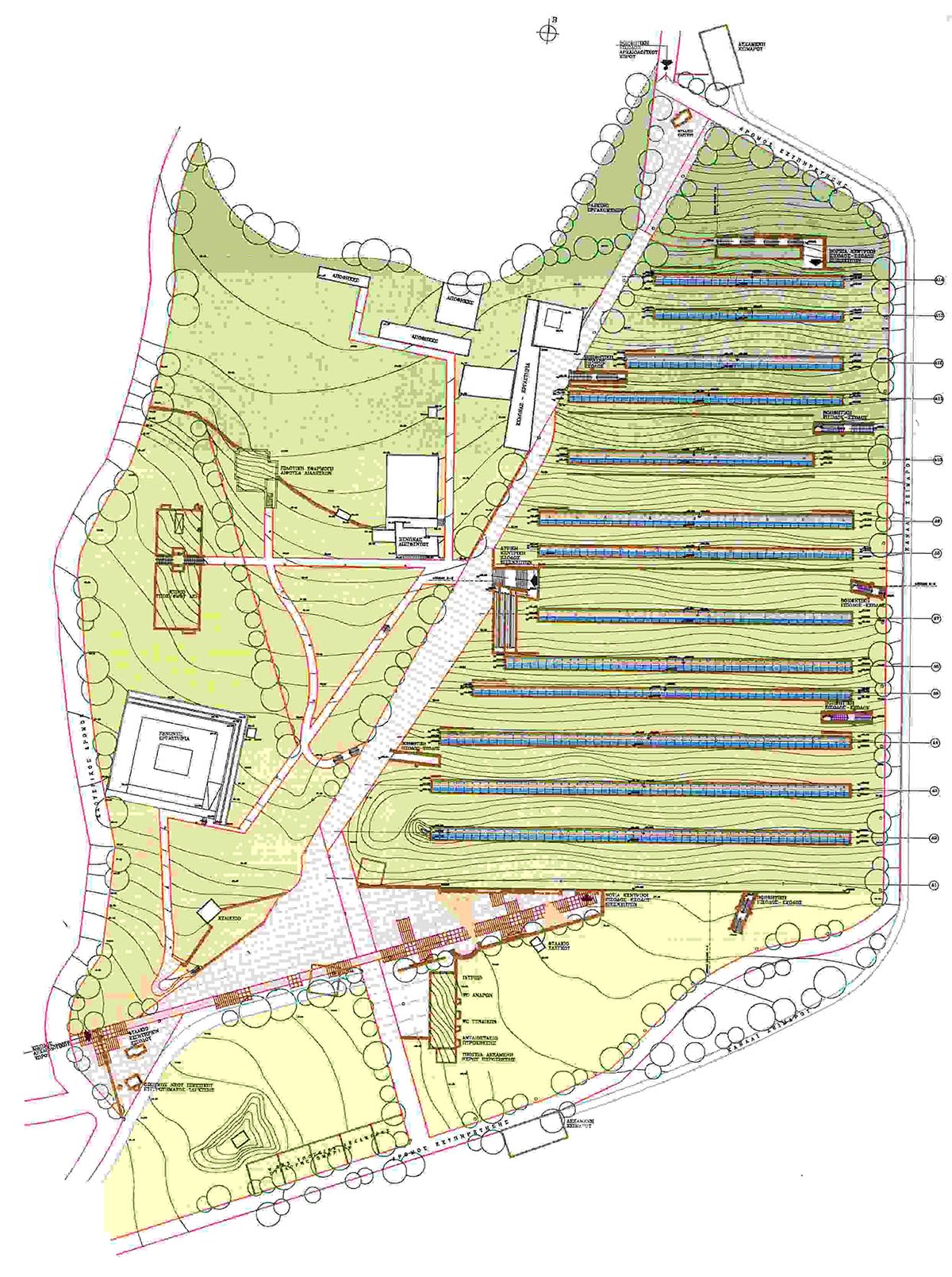 All images courtesy of Synthesis and Research Ltd