Housing for All: ’’Get rid of regulations and privatise all public space’’ says Patrik Schumacher 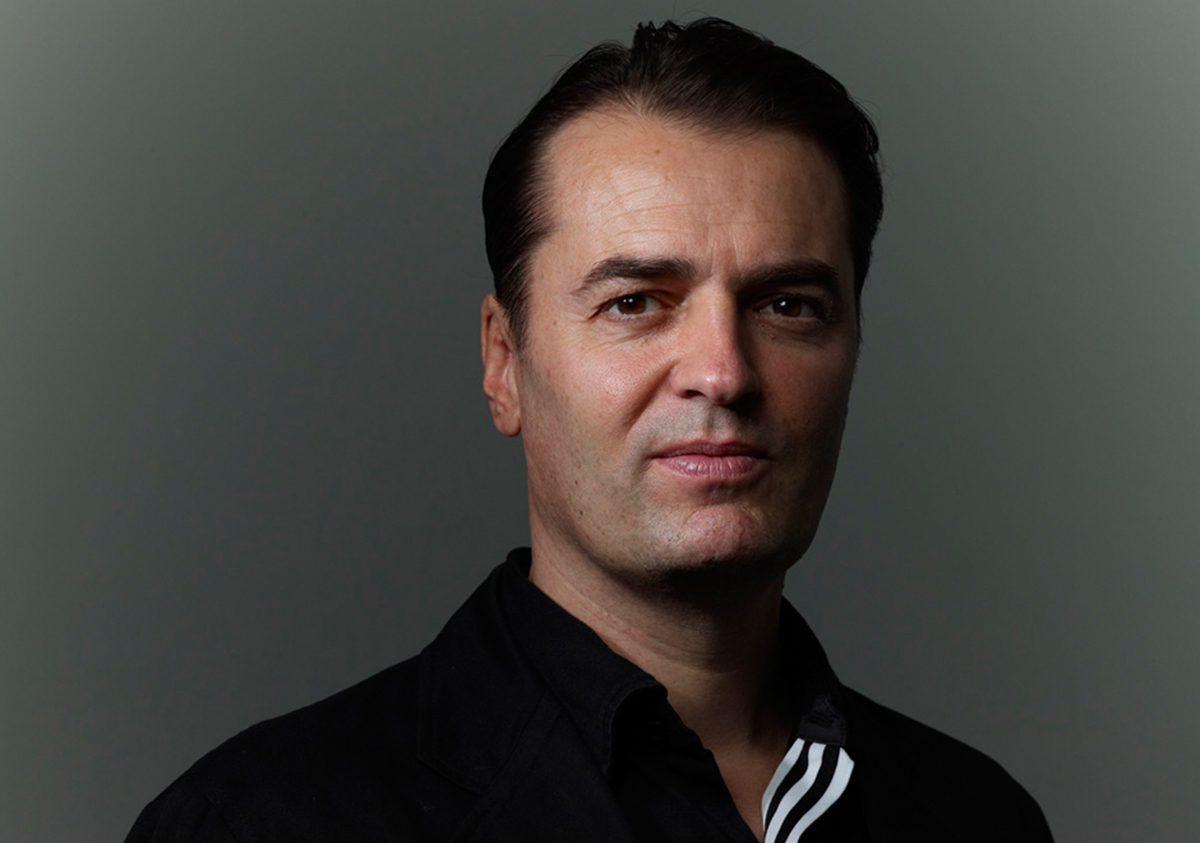 Zaha Hadid Architects director Patrik Schumacher has delivered a trigerring keynote, highlighting London's housing crisis and proposing possible solutions to general constructive process of social housing and public spaces. Speaking at the Wold Architecture Festival in Berlin, the architect has called for getting rid of strict governmental regulations, scrapping social housing and privatising all public space to set up a constructive conversation about how to improve the conditions for freedom and prosperity for all.

Titled 'Housing as architecture', the discussion has evaluated housing crisis as a political framework and new constructive agenda, which is currently based on politics, migration, urbanisation, new cities and numbers. The session has revolved around this trick question: What has happened to consideration of this building type as architecture, and what lessons could we draw from the work of Zaha Hadid Architects in Berlin and across the world? 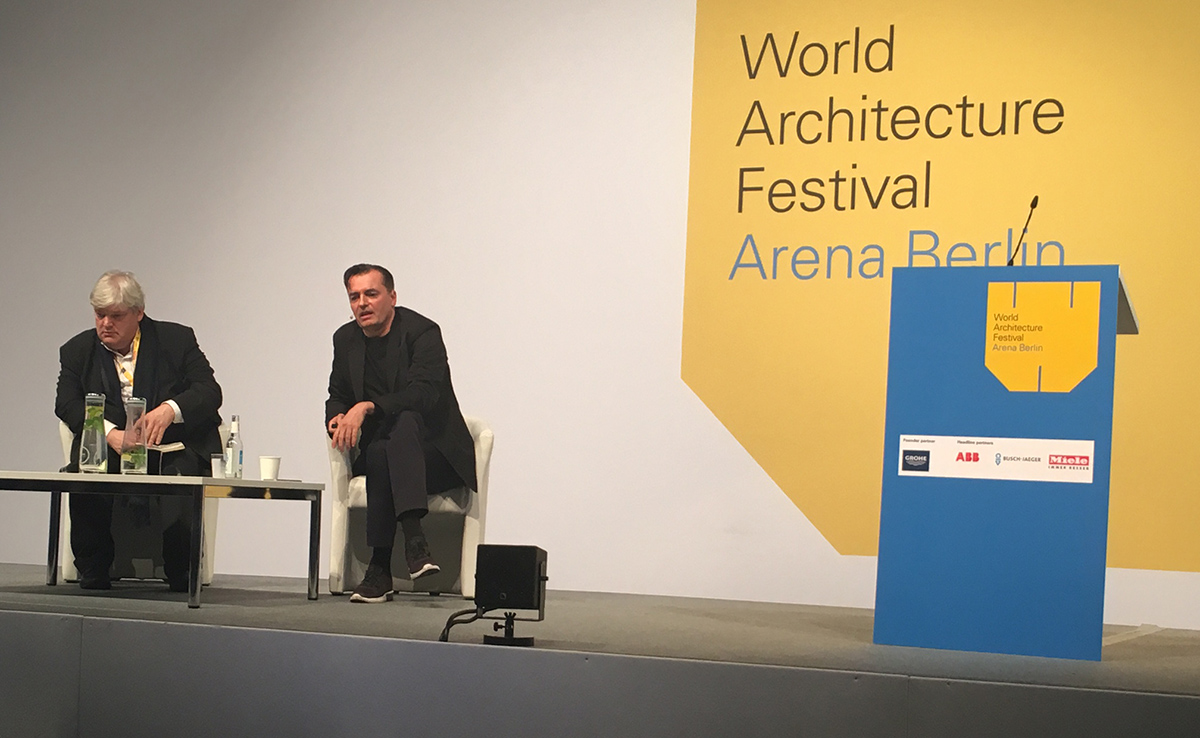 Regarding to the theme, Patrik Schumacher proposed an eight-point prescription (thesis) to get more efficient housing provision and progressive dynamics which need benefit everybody in the long run -living in the cities. The architect also defended foreign investments to the cities and gentrification, which means it would be beneficial to the cities in the long run, especially, addressing to London's 'affordability crisis'.

"Foreign investment capital coming into town should and would be great news," Schumacher said. "I know a lot of people that have second homes in London and I'm so glad they do," he added. "Even if they're here only for a few weeks and throw some key parties, these are amazing multiplying events."

"We do not have a real market in real-estate provision, that's why we have a housing crisis," he said. "Housing for everyone can only be provided by freely self-regulating and self-motivating market process.''

The press also interferes with foreign investors to buy a property in the city, according to Schumacher, that's why, ''many properties are left empty because these figures are not welcomed, which are mordantly reflected,'' the architect adds.

Schumacher also criticised governmental regulations and limitations which interfere in architect's creativity process. He said all social housing standards and land-use agendas should be abolished to propose flexible design process for all.

"The fact that someone has had the privilege of a subsidised central location for some time, in my view should not establish ownership," he said. "Is it not fair that it's someone else's turn to enjoy the central location? Especially if it's those who really need it to be productive and to produce the support required for those that have been subsidised."

"All top-down bureaucratic attempts to order the built environment via land-use plans are pragmatically and intellectually bankrupt," he said, and claimed that housing standards are "robbing us of many choices". 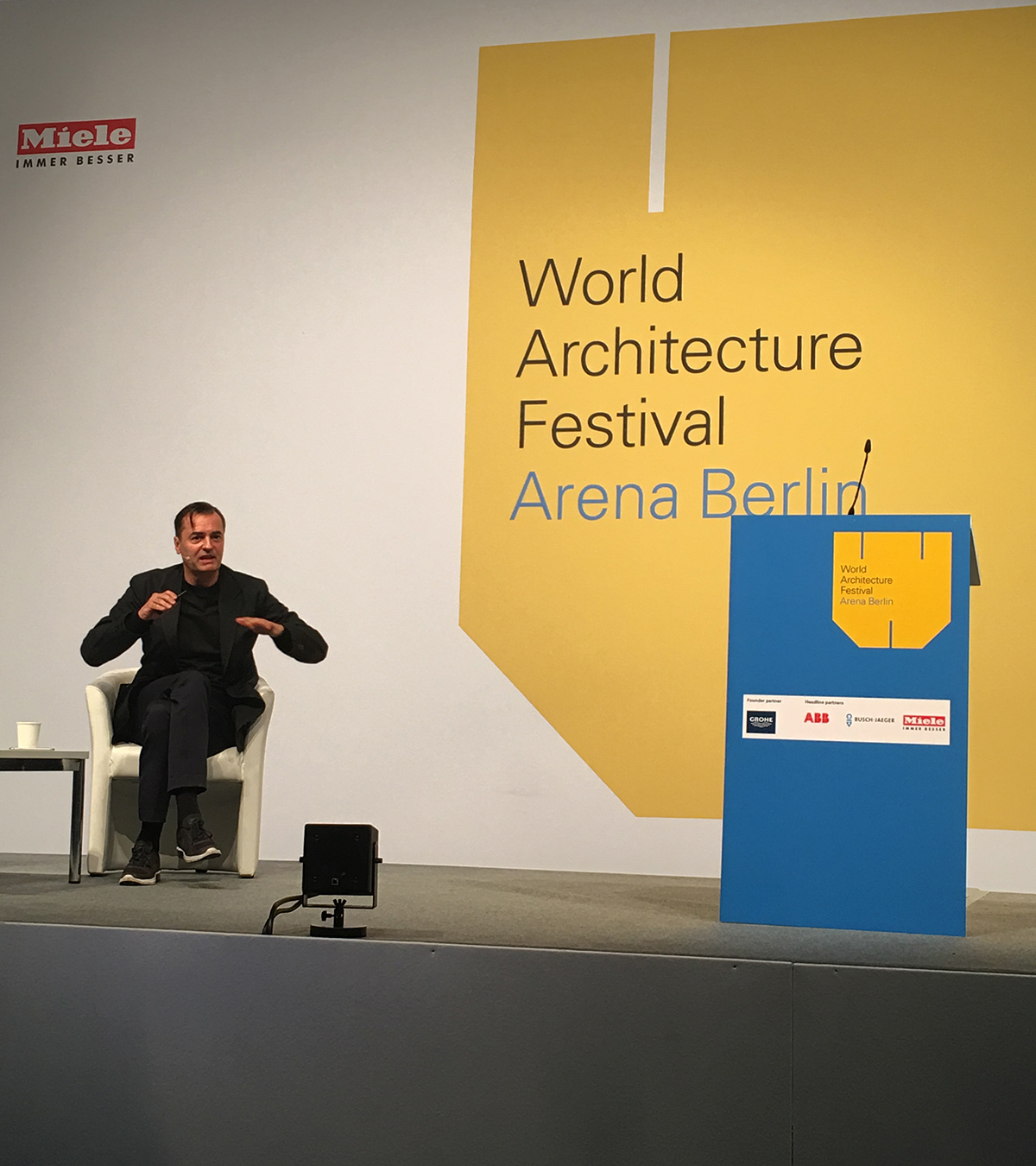 Patrik Schumacher at the WAF, delivering a keynote on 'Housing as architecture'

The architect also claimed that we should privatise all streets, squares, public spaces and parks – or even whole city areas, which can be a good idea. Even, Hyde Park could even be replaced with a new city by asking that "How much are you actually using it?". "We need to know what it costs us!"

Here's are Patrik's 8-point manifesto to strive against housing crisis:

1. Regulate the Planners: Development rights must be the starting point, then tightly define and circumscribe the planners' scope and legitimate reasons for constraining development rights:

Nothing else can be brought to bear – no social engineering agendas!

2. Abolish all land use prescriptions: The market should perhaps also allocate land uses, so that more residences can come in until the right balance with work and entertainment spaces is discovered. Only the market has a chance to calibrate this intricate balance.

3. Stop all vain and unproductive attempts at "milieu protection"

4. Abolish all prescriptive housing standards: Planners and politicians should also stay away from housing standards in terms of unit sizes, unit mixes, etc. Here too the market has the best chance to discover the most useful, productive and life/prosperity-enhancing mix. The imposition of housing standards protect nobody, they only eliminate choices and thus make all of us poorer. Stop all interventions and distortions of the (residential) real state market. (All subsidised goods are oversupplied and thus partially wasted.)

5. Abolish all forms of social and affordable housing:

-No more imposition of quota of various types of affordable housing

-phase out and privatise all council housing,

6. Abolish all government subsidies for home ownership like Help to Buy: This distorts real housing preferences and biases against mobility.

7.  Abolish all forms of rent control and one-fits-all regulation of tenancies: Instead allow for free contracting on tenancy terms and let a thousand flowers bloom.

Here is a recipe for the creation of the dense, urban fabric that delivers the stimulating urbanity many of us desire and know to be a key condition of further productivity gains within our post-fordist network society.

Patrik Schumacher delivered his keynote speech at the second day of World Architecture Festival, chaired by Jeremy Melvin, Curator of WAF. After a speculative conversation, Schumacher has taken both positive and negative response from the audience and public, especially, criticising ZHA's housing projects for producing luxury homes for wealthy people.

The conversation has ended with Jeremy Melvin's conclusion remark by saying that ''Patrik, pay your workers enough so, they can buy your homes''. 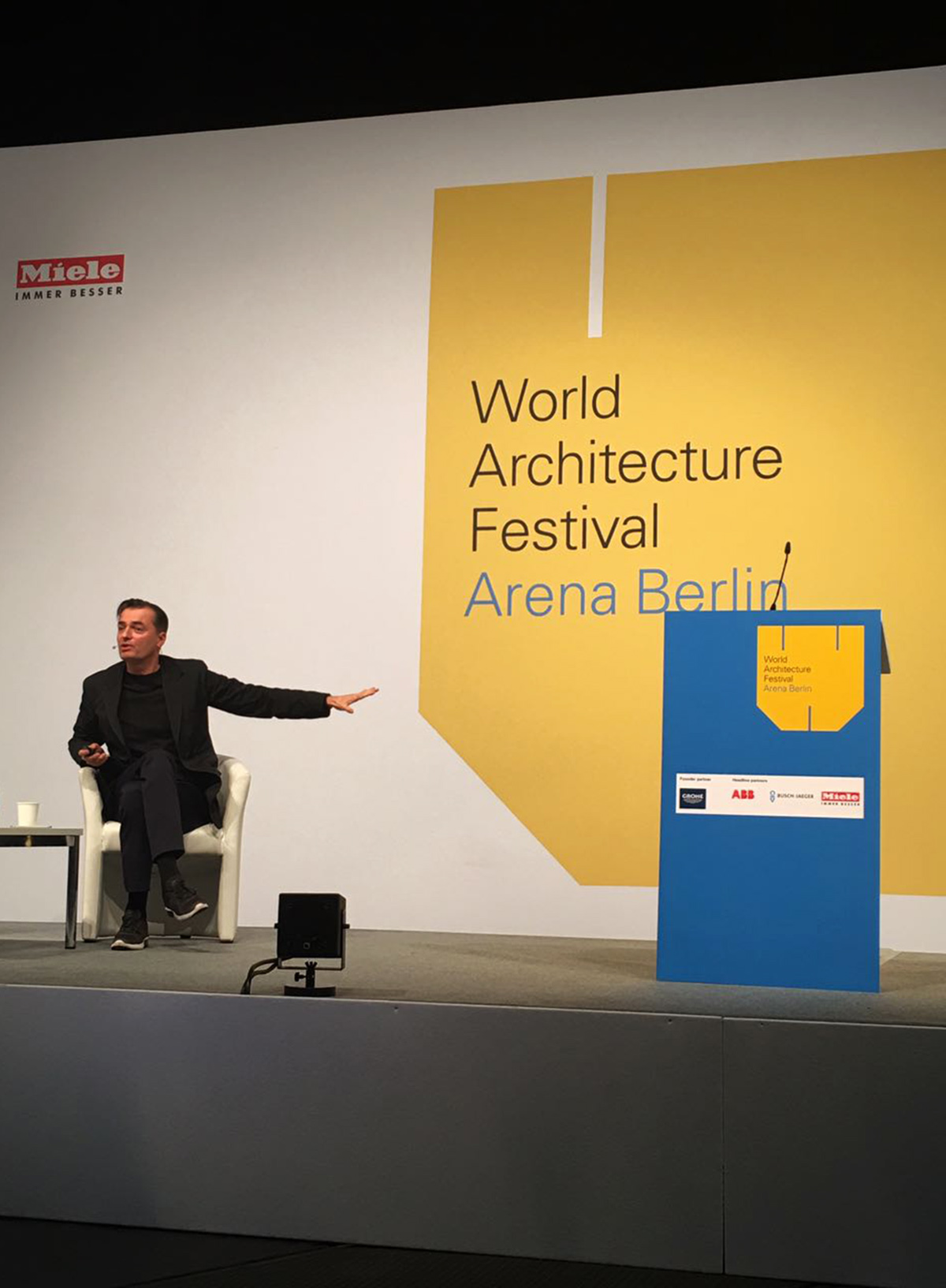 Patrik Schumacher at the WAF, delivering a keynote on 'Housing as architecture'

After the event, Patrik Schumacher issued two statements about his speech on his Facebook page, particularly, not to personalise these propositions over 'rich' or 'some certain groups'. He said that ''I have recently entered the emotionally charged debate of the London housing crisis with some seemingly outrageous, callous and arrogant propositions, triggering epithets like ‘this nasty man’ and ‘the Donald Trump of architecture’.

''While I did get a lot of moral support and encouragement – especially from those who witnessed the whole event including the Q&A session - my comments were here largely (although not exclusively) met with disbelief and disgust (raising also the suspicion that these represent a deliberate sensationalism in search of notoriety).''

''These gut reactions represent not only the current left-liberal (anti-capitalist) consensus within our discipline - a consensus I shared until relatively recently and which I would like to challenge now – but are also fuelled by the feeling that my statements offend a much deeper set of values – universally shared values and longings that I do neither want to offend nor challenge – namely a deep sense of human solidarity, compassion and the longings for a better world for all.''

''The analysis might lead to proposals that disadvantage certain groups, hopefully only in the short run, for the sake of an overall progressive dynamic which should benefit everybody in the long run, including those who are apparently or really being disadvantaged in the short run. I hope that my remarks made at WAF can be taken as attempts to engage in a constructive conversation about how to improve the conditions for freedom and prosperity for all. When I used the title ‘housing for all’ I meant it!''

''Do my propositions advanced at WAF (or on Face-book) represent the opinion of ZHA? No, firms do not have opinions, only persons do. I made my remarks at WAF not as representative of ZHA but as an individual who likes to query and discuss the political framework under which our discipline contributes to the development of the city. As professional I accept the instituted legitimacy of this framework as premise of all our work.''

''These two hats are strictly separate. The city and all clients - public or private - can rely on this, namely that ZHA's professional work takes its clients' goals together with all instituted stake holders' concerns as the sole premises of its work. Those who know me know that I have always argued against the expectation that architects should second guess the moral or political legitimacy of the project briefs they are invited to address by substituting their own goals based on their own political and moral judgement for the goals and judgements that have already been legitimately established for a site/project.''

''This is general professional service ethics 1.01. Conscience has only one option in this: to refuse the job if the job's goals deviate too strongly from your own moral compass. Would I recommend ZHA to refuse a social housing project? Not at all! We did in fact deliver social housing in Vienna and we a proud of what we have contributed to there. The reasons why social housing is a good idea in the current societal constellation are perfectly intelligible to me and I am perfectly capable and willing to argue its case and contribute to its underlying intentions (social integration across income groups etc.) in any given project.

''This does not exclude that different reasons and arguments might be advanced in a different, more general and abstract discursive context where the overall institutional framework is queried against more fundamental principles and deeper shared aspirations.''