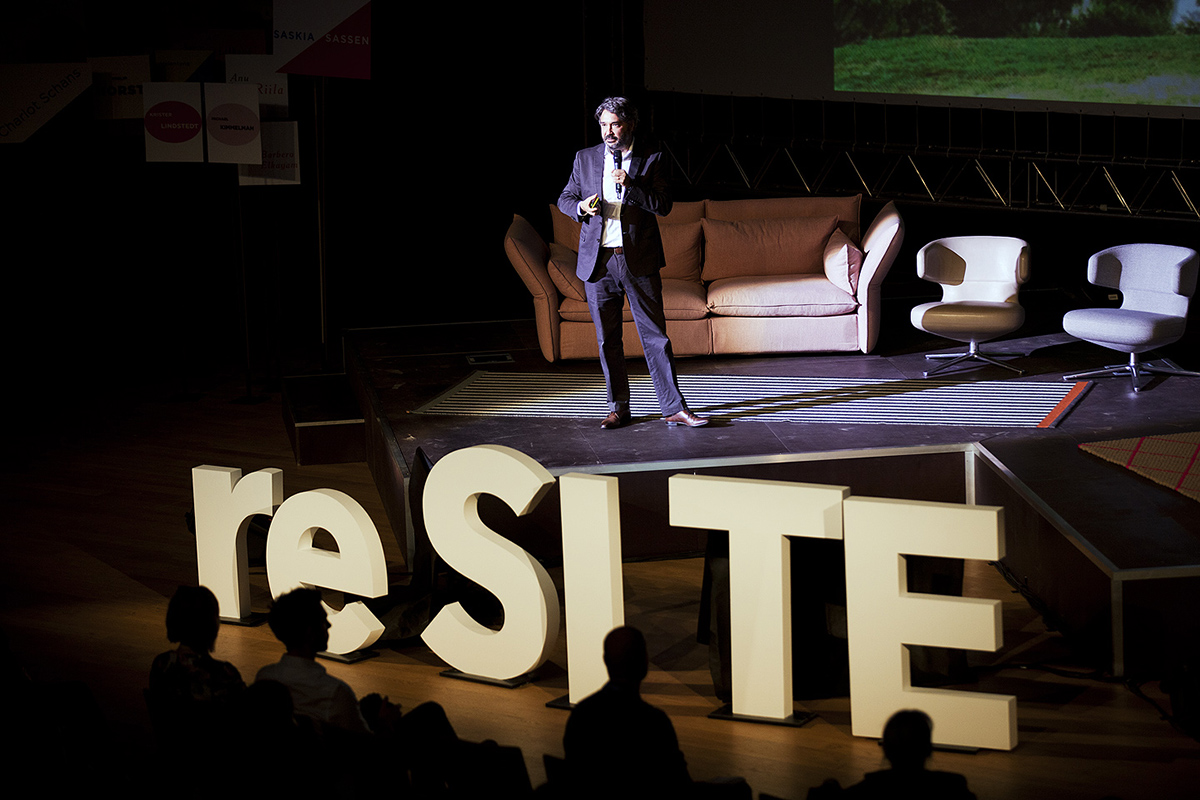 On 16-17 June, Prague hosted the 5th annual international conference titled ''reSITE 2016: Cities in Migration'' The conference registered a record 844 visitors from 23 countries, including 77 representatives of Czech and foreign media. reSITE 2016 offered ideas about how to plan a 21st century city prepared for migration while luring new residents. The chairman and founder of reSITE, Martin Barry, began the conference by asking two questions: "Where are you from?" and "Where are you going?"

Barry explained how these questions can evoke deep and fundamental issues of urban migration for each of us. "Cities must plan their future, not drift there. As residents we want to imagine where we want to be in 20 years, we can be anywhere, and cities must understand how to plan the ideal cultural and business and built environment. Planning and design is essential." He emphasized the importance of a strong vision and smart urban planning for the next generation.

The biggest stars gave lectures, like Professor Saskia Sassen; the director of NYC planning, Carl Weibsrod; New York Times architecture critic, Michael Kimmelman; and architects Martin Rein-Cano and Mimi Hoang, who intermingled their emphasis on the needs of the people, communities, migrants, refugees and new residents in their concept of urban development, housing and public space. The Prague Institute of Planning and Development presented the ongoing Metropolitan Plan for Prague, and hundreds of people were involved in a giant board game to plan the ideal city, called ''Play the City.''

"I thank everyone for their support and participation. There is so much interest across all disciplines and professions, which gives us hope for a positive impact on European cities. We look forward to seeing you again at reSITE 2017 on June 22-23," concluded Martin Barry. This year, the audience reached reSITE’s broad target across sectors: 18% representatives of municipal governments, 17% people involved in the investment and real estate market, 11% were architects and urbanists, 14% were representatives of NGOs and universities, 17% students, 11% of media representatives and 12% other visitors. As typical at reSITE events, the demographic mixed young and old, business, government and civic actors. 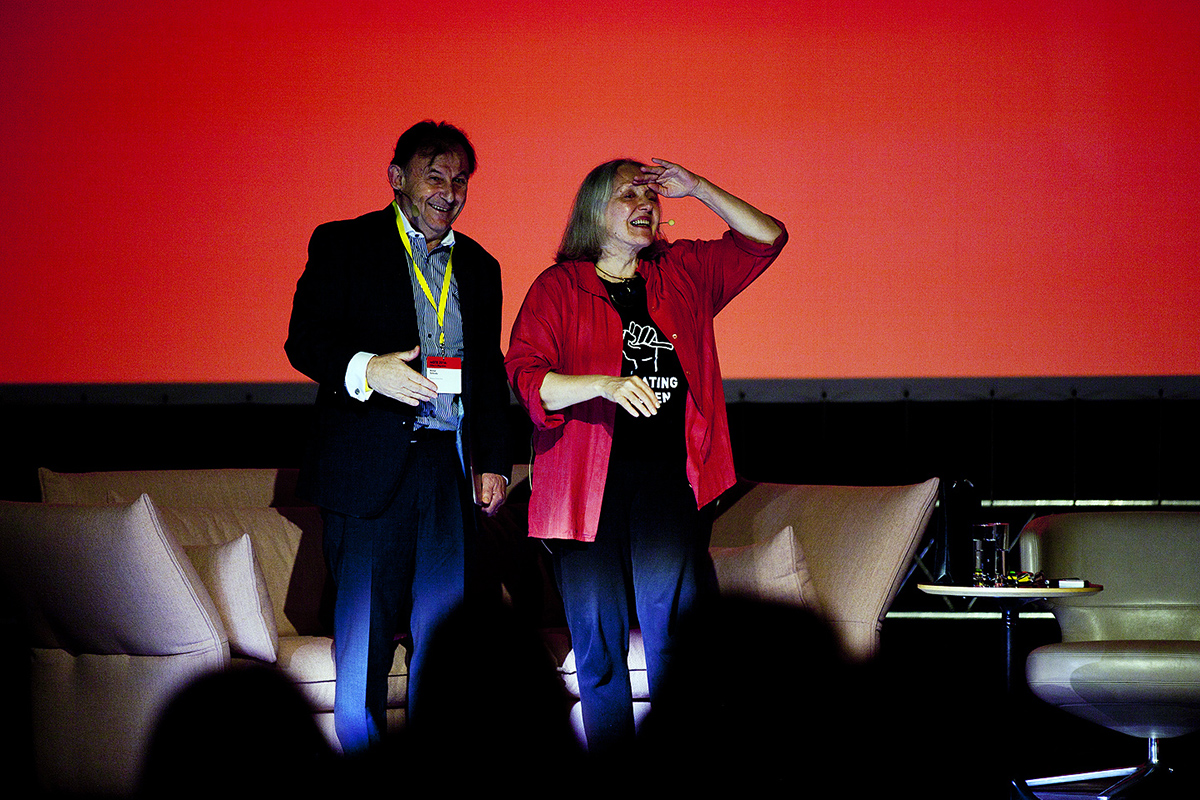 World Architecture Community covered reSITE in our special section 'Urban Development' by saying: "A fantastic event overall, where a very current issue was discussed by some of the best global experts." The conference was opened on June 16 by world-renowned urban sociologist, Saskia Sassen, who dealt with major themes - relationships between economics, immigration and geopolitics and how the West should respond to the current migration crisis. "I am a migrant. Migrations are not often about search of better life, but about the search of a bare life." She pointed to the problem of invisible boundaries within cities that always arise when people cannot find affordable housing. According to Professor Sassen no city can be cosmopolitan or sustainable in the global economy without open arms to immigrant cultures.

"Social and urban change go hand-in-hand, and affordable housing is the number one issue today," the architecture critic of The New York Times, Michael Kimmelman said in his lecture. Kimmelman is often referred to as “the people’s critic.” The fascinating and inspiring story of moving the entire city of Kiruna, Sweden produced yet another type of migration story, told by Krister Lindstedt of White Architects from Sweden. His recipe for successful urban megaproject sounds deceptively simple: "To move a city physically and spiritually, we decided to talk to people." 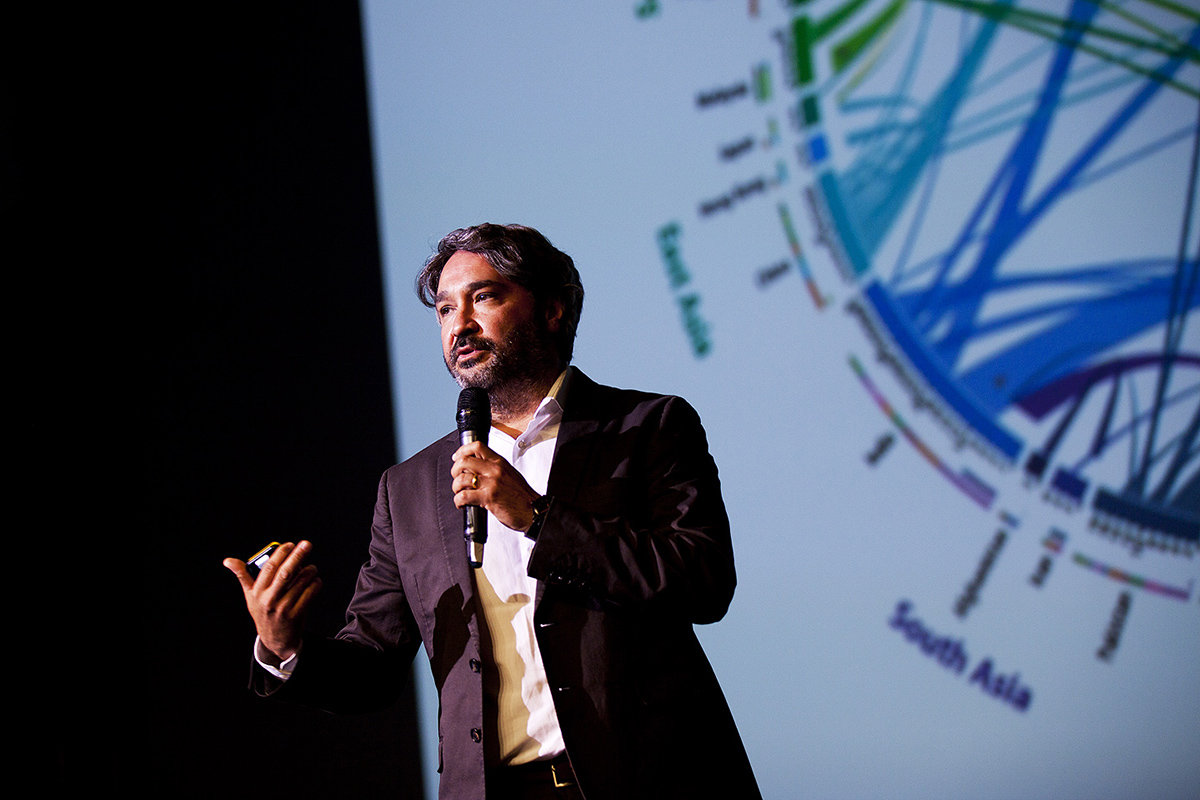 Politically provocative, visually and intellectually engrossing Martin Rein-Cano introduced the genesis of Superkilen park in Copenhagen, which is inspired by the diverse cultures of all residents in adjacent neighborhoods. “Migration has not only to do with immigrants, it also involves residents of the cities the immigrants move to.“  Rein-Cano also had something to say to Prague, "Tourists in Prague are pain in the a**, immigrants would be a much better contribution to the city." 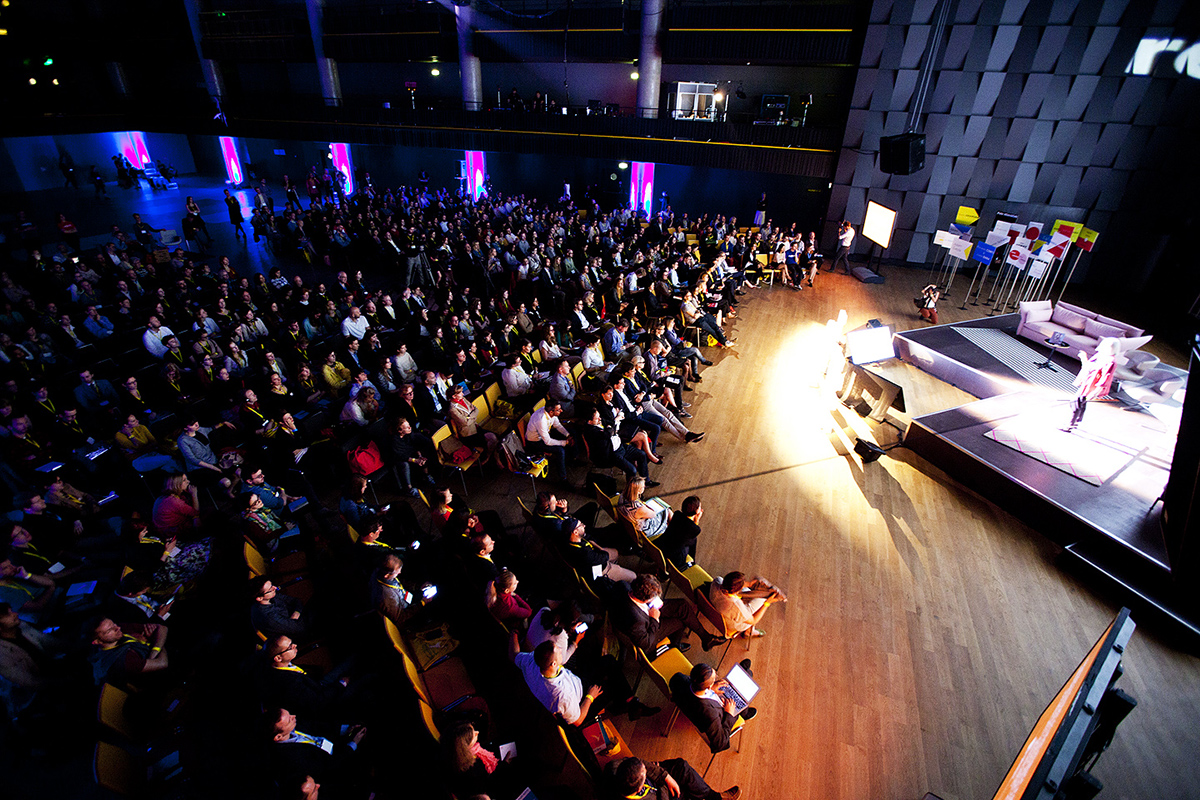 Marcus Westbury, founder of Renew Newcastle in Australia, which finds retail and art uses for abandoned buildings, is trying to connect ideas and capital: "People with capital, had no imagination. While people having imagination, had no capital.” Renew tries to solve that problem. 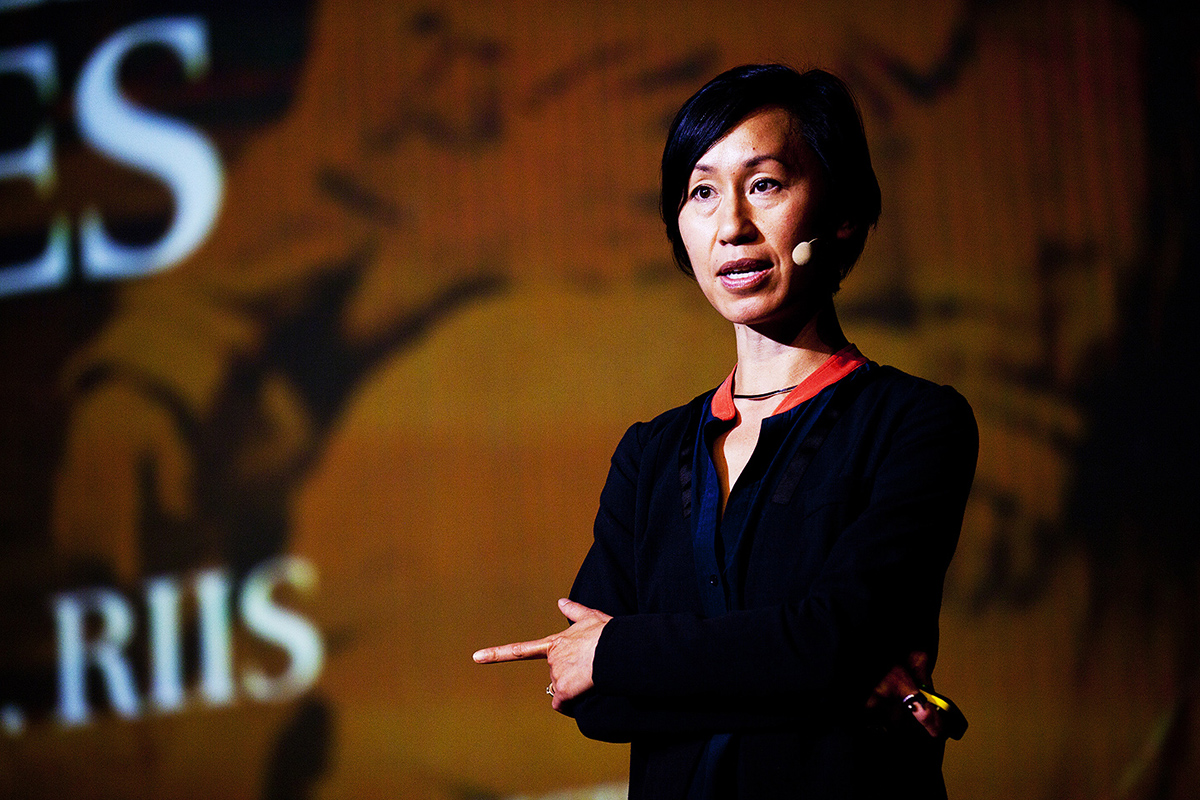 Mimi Hoang on the stage. Image courtesy of reSITE

The second day of the conference was devoted mainly to affordable housing as a key challenge for all cities today. The first project presented was about micro-unit apartments from New York architect Mimi Hoang, a graduate of Harvard, MIT and visiting lecturer at Columbia University.

Her recently opened project Carmel Place offers apartments measuring from 25 to 35 square meters, aroused unexpected demand when about 60,000 people competed for 55 units when the project opened. “The macro vision is important because the whole should be more than just the sum of the parts. In our project, 40% of apartments are considered ‘affordable’ (by NYC standards).” 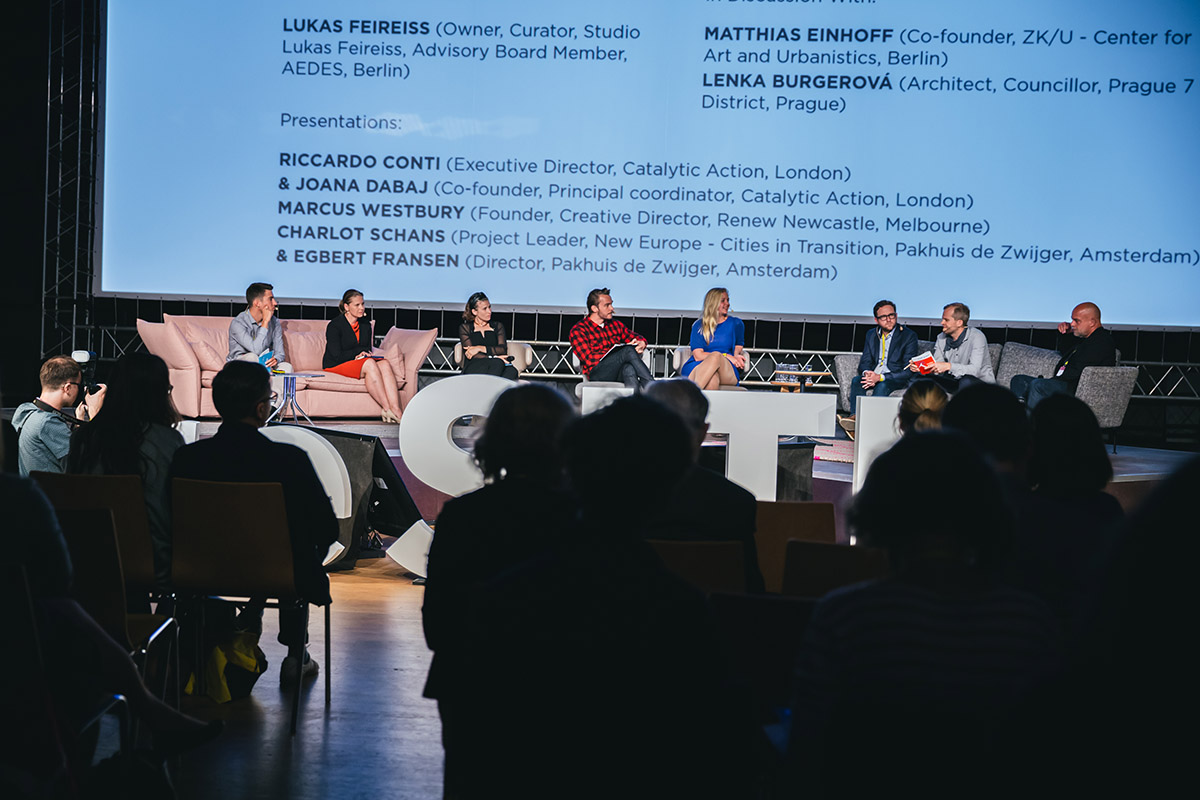 The project emphasized the importance of social cohesion, which is directly determined in the housing policy program of the City of New York. The detail of this plan was introduced by Carl Weisbrod, the Commissioner of New York City Planning, who brings more than thirty-five years of experience to the job, and who worked under Mayor Bloomberg and four other mayors both in the private and public sector. Prague Mayor, Adriana Krnácová, attended the lecture. 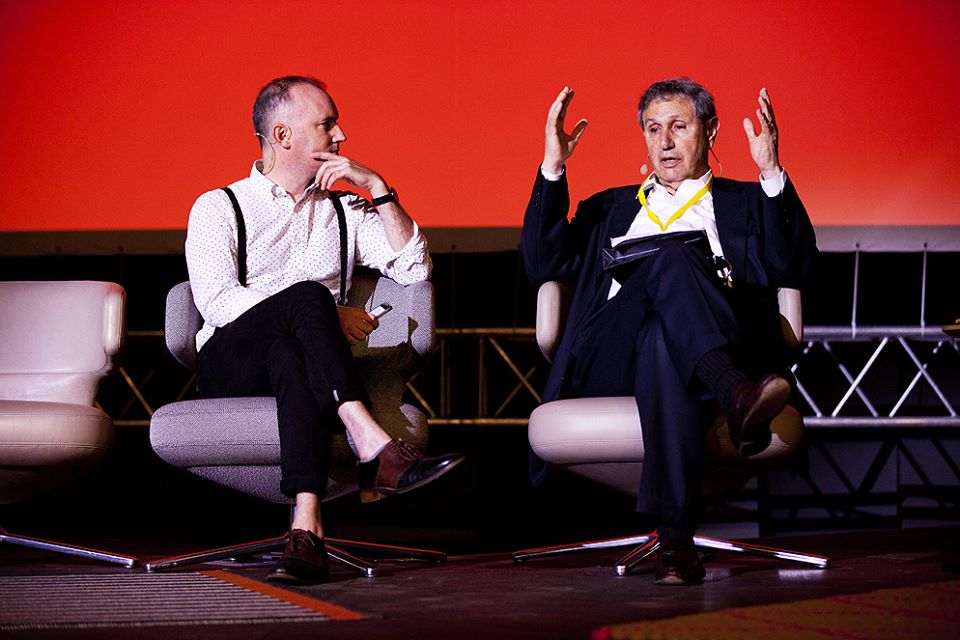 "Housing New York," which started in NYC in 2014, has the ambition to build 200,000 affordable housing over 10 years. Carl Weisbrod offered inspiration for any city, including Prague: "Right in the zoning plan, we determined that at least 25 to 30 percent of newly built dwellings must be considered ‘affordable.’ We do not want economically depressed sections of the city. These units must be included in market-rate development." 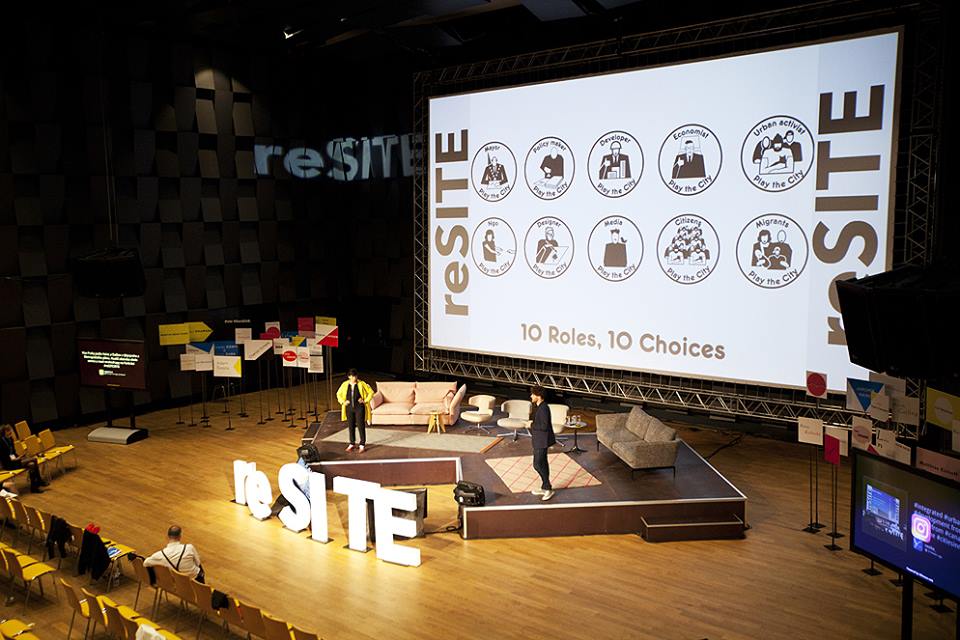 At this year's reSITE, the organizers decided to try an experiment – they organized a giant board game called ''Play the City,'' in which participants tried out different professional roles while planning a city. Game designer Ekim Tan from Amsterdam said that it was the first time she involved so many people in the game, which was played on 12 different massive game boards on the floor of the Forum Karlin venue. "It does not mean that the game should offer only the one ‘right way’ to plan.

There can be many good solutions when hearing from diverse stakeholders. The game rather creates unexpected partnerships and relationships and helps build mutual trust," said Ekim Tan on server Aktuálne.cz. And first of all, the game help to understand that the right solution starts with good communication. 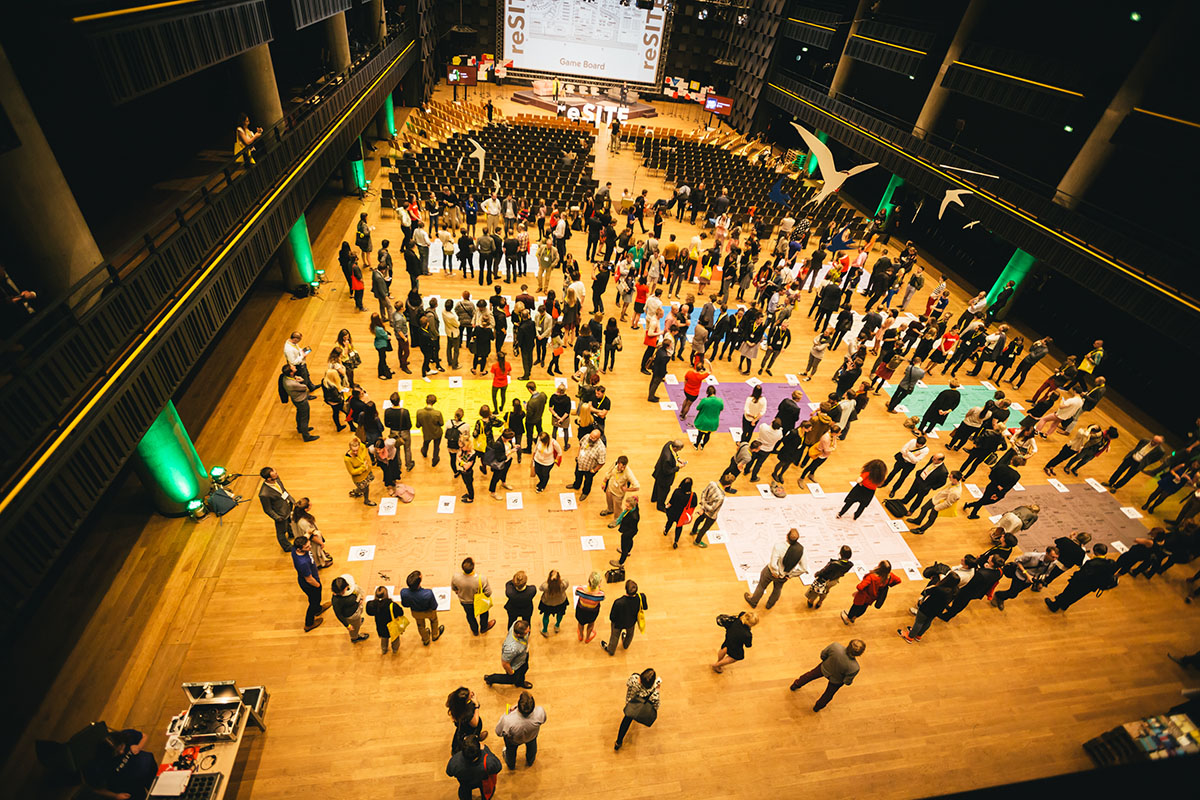 A lot of inspiration was brought by guests from Germany. One of the main planners of Munich, Martin Klamt, pointed to the need for flexibility in Munich and other cosmopolitan cities. “We try to set up new dwellings very quickly. We not only need to think quickly but also do the right thing. We must ask: do we stick to high standards or lower standards for the newcomers? We keep standards high but move quickly.”

Co-founders of the Berlin-based Center for Art and Urbanistics ZK/U Philip Horst and Matthias Einhoff emphasized the need for a bottom-up approach: “Only the bottom-up approach can open our cities to new ideas of solidarity and to make them a reality." The idea of solidarity is also valuable for Refugees Welcome, the organization that searches for unused accommodation to offer to homeless refugees.

Mareike Geiling and Jonas Kakoschke introduced what brought them to their activities: "Refugees should live in private dwellings with locals instead of refugee camps with other refugees. Learning the local language and culture is much easier when surrounded by locals in a private home.” These are just two of the many arguments against immigration camps, isolation and ghettoization. 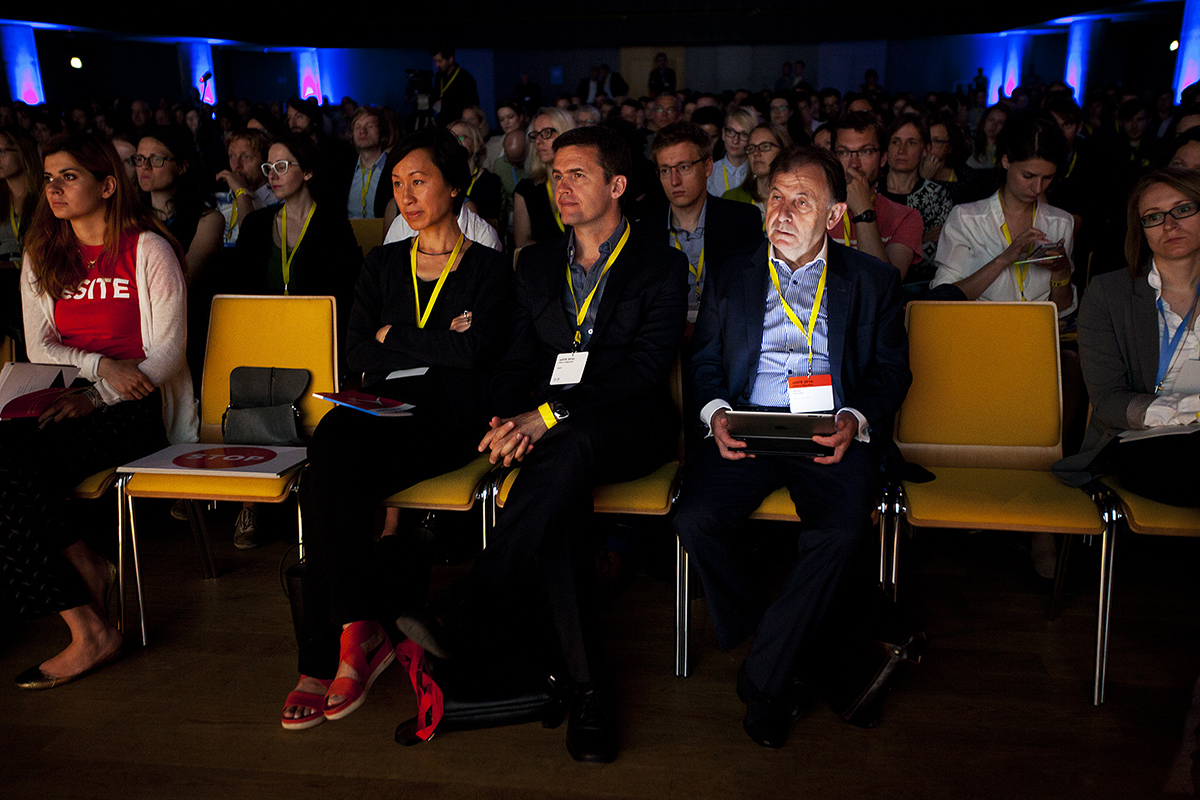 High quality public space, recreation facilities and nicely built public environments in makeshift refugee camps is an essential part of London-based Catalytic Action. The young designers and co-founders Joana Dabaj, originating in Lebanon and Italian Riccardo Conti, talked about how the “center of each project is people, not the architecture or design.” 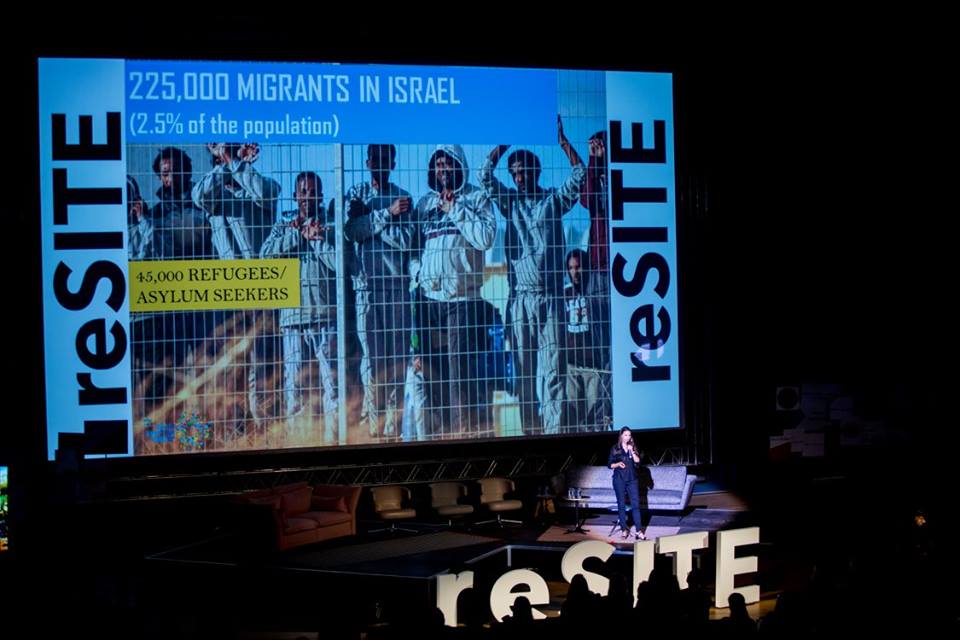 Great attention was given to the exciting lecture of Mascha Onderwater from Amsterdam-based Bureau B+B, which focused on the transformation of Vienna's main shopping street, the Mariahilfer Strasse pedestrian zone. The studio won the competition but from the perspective of the public, the process was not complete. Mascha used models to carefully coordinate the streets with sensitively integrated transportation, fresh furniture and colorful figures, which showed the best design approach priorities. 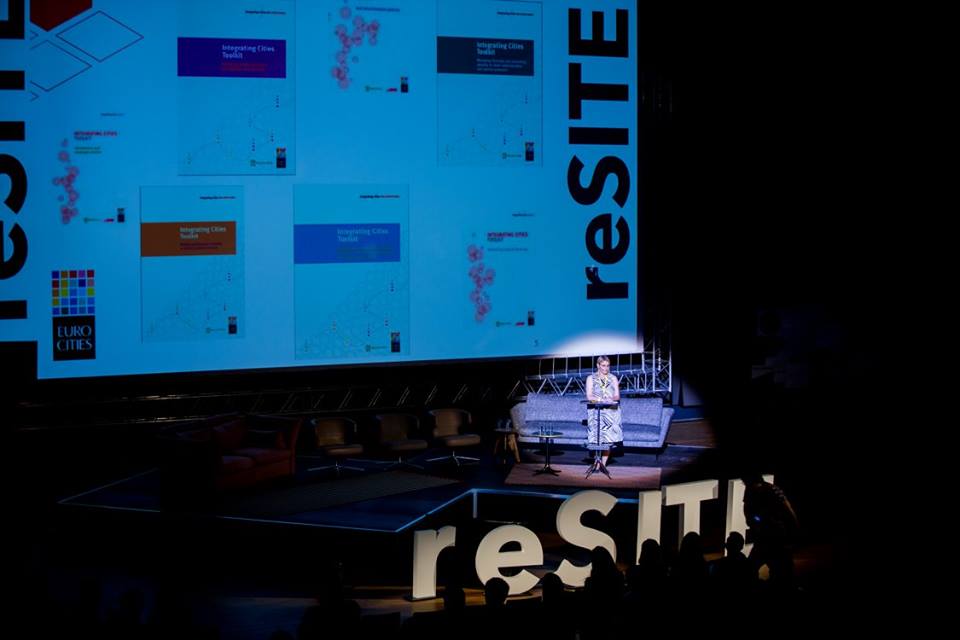 At the Hotel Emblem reSITE held three events for the general public including two salon discussions and an integration workshop, all supported by the Czech-German Future Fund and the Embassy of the Kingdom of the Netherlands. IPR Prague and Rekola organized a cycling tour of Prague as part of reSITE 2016.

The tour focused on new development sites in Prague 7 (Holešovice), Karlín and the Rohanske embankment. A 5th anniversary party was hosted by reSITE at the “Stalin” pop-up bar with a DJ and complimentary drinks.  Finally, nearly two dozen children used the “reSITE Children's Corner” and day care at the conference, which were part of the free services for event visitors. 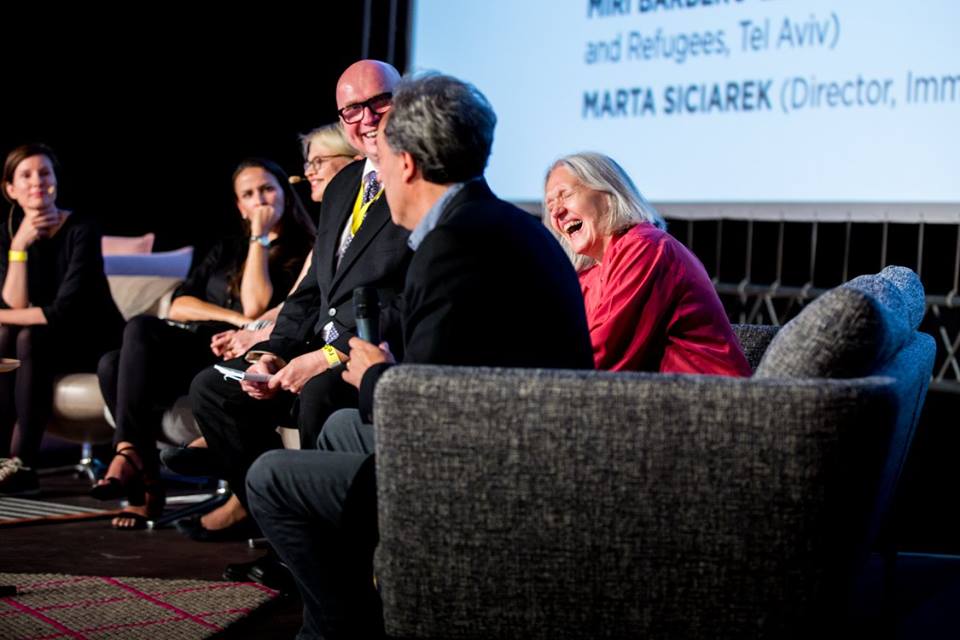 Most of them hold several titles and has a CV of interdisciplinary and international work.